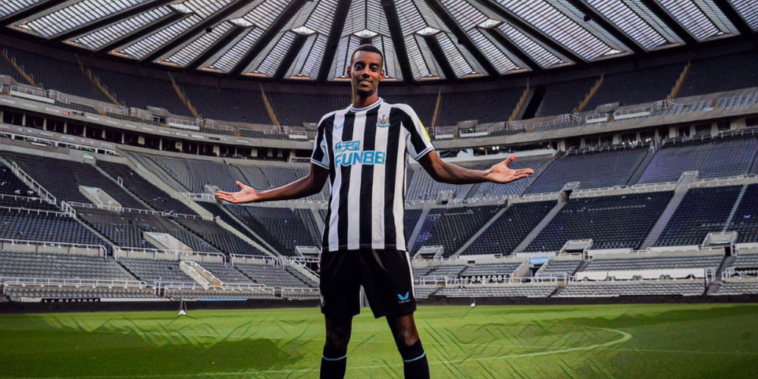 Premier League clubs spent big once again this summer, enjoying a record-breaking transfer window in 2022. England’s leading clubs spent £1.9 billion on new additions, around £800m more than the previous summer and significantly higher than the previous record of £1.4bn spent in summer 2017.

Among the record-breaking investment were seven club-record signings and we’ve decided to rank each record arrival made in the Premier League this summer.

From cheapest to costliest and including potential add-ons, here are the seven club-record signings made in the Premier League this summer.

Brentford are looking to continue their upward momentum after an impressive first season at Premier League level. The Bees performed above expectations to finish 13th last season and continued their policy of investing in the future during the summer.

The likes of Ivan Toney and Rico Henry have impressed since stepping up from the lower tiers and Brentford will hope Keane Lewis-Potter is the next gem the club have unearthed.

The 21-year-old shone after coming through the academy ranks at Hull City and scored 25 league goals across the past two Championship seasons. The winger was named as Hull’s Player of the Season in 2021/22 and Thomas Frank will hope Lewis-Potter can help replace the creativity lost following Christian Eriksen’s exit.

Brentford’s deal for Lewis-Potter – who has scored once and laid on an assist in three starts across all competitions this season – is worth an initial £16m, which could rise to £20m with add-ons. The England u21 international will hope to follow the example of Jarrod Bowen, who has earned full international honours after swapping Hull for the Premier League in 2020.

Wolves broke their transfer record to add to the club’s Portuguese ranks, securing the signing of Matheus Nunes for a fee which could reach £42.2m. Bruno Lage’s side will pay an initial £38m with the remainder dependent on add-ons, in a deal which eclipses the £35m paid for Fabio Silva in 2020.

Nunes’ arrival has been viewed as a huge coup for Wolves, with the 24-year-old reportedly having been tracked by the likes of Liverpool and Manchester City.

He made 76 appearances and scored seven goals across his three-and-a-half seasons at Sporting Lisbon, and has won eight caps, scoring once, since his debut for Portugal last year.

Nunes adds real quality to a midfield that has relied upon Ruben Neves and Joao Moutinho in recent campaigns, with his energy, tenacity and press-resistant dribbling stand-out features of his game.

Pep Guardiola is clearly an admirer, having hailed the midfielder as ‘one of the best players in the world today’ following Manchester City’s meeting with Sporting Lisbon in last season’s Champions League.

Nottingham Forest’s summer spending was impossible to miss as the newly-promoted side set a new British record with 21 new arrivals.

Steve Cooper transformed his squad following the club’s return to the Premier League for the first time in 23 years, with Forest having spent around £160m – more than the likes of Real Madrid and Barcelona – on a remarkable overhaul.

The most expensive addition was the signing of Morgan Gibbs-White from Wolves. Forest have paid an initial £25m for the midfielder, though the deal could reach a huge £42.5m if clauses are met.

So proud to join @NFFC! Can’t wait to play in front of the fans at the City Ground! Let’s go! ❤️👊🏽 pic.twitter.com/1DuUIxVU1u

It’s a stunning fee for a footballer who has struggled to establish himself at Premier League level with Wolves, though Cooper is well aware of the 22-year-old’s capabilities after coaching Gibbs-White during England’s U-17 World Cup success in 2017.

The midfielder shone during a loan spell at Sheffield United last season, where he scored 12 goals and was named as the Blades’ Player of the Year.

West Ham were among the Premier League’s highest spending clubs during the summer, as David Moyes was given significant backing at the London Stadium.

The Hammers had a net spend of £147.78million in the summer window, a figure which trailed behind only Chelsea and Manchester United. The most expensive of an exciting recruitment drive was the arrival of Lucas Paqueta from Lyon, a footballer who Moyes admits caught his eye in last season’s Europa League tie between the teams.

Paqueta provided 35 goals and assists for Lyon in 80 appearances across all competitions and was included in the Ligue 1 Team of the Season in 2020/21. He has earned 33 caps for Brazil and has scored seven goals, underlining both the midfielder’s quality and the Premier League’s pulling power.

Last season he was the only player in Ligue 1 to register 50+ for shots, take-ons completed and tackles made. He could prove to be a Swiss Army Knife option in the West Ham midfield.

Antonio Conte has sought to build on last season’s fourth-place finish with an upgrade of his squad at Spurs, bringing in seven new additions during the summer window.

Richarlison was the headline arrival, signing from Everton for a fee which could reach £60m with add-ons. That figure would eclipse the £55m paid to sign Tanguy Ndombele in 2019 and the North Londoners will hope the forward can have a significantly greater impact than their last record purchase.

Richarlison's game by numbers vs. Fulham:

Fantastic on his first start. 👏 pic.twitter.com/XCWMafIdAm

The early indications have been positive despite a patient approach to introducing the new arrival, with Richarlison making game-changing interventions off the bench at Chelsea and Nottingham Forest.

He was excellent on his first start against Fulham last weekend and alongside Harry Kane, Heung-Min Son and Dejan Kulusevski has provided Spurs with a forward line boasting real depth and quality.

Newcastle resisted the temptation to use their backing for mass change, instead opting for calculated arrivals following their upturn in form last season.

After a modest spend, the Magpies spent big to capture Alexander Isak from Real Sociedad in the latter stages of the window. Isak had been linked continually with a move to the Premier League in recent windows and arrives at St James’ Park with a record of 44 goals in 132 games for Sociedad.

Still just 22, he has the potential to become a key figure in Newcastle’s improving team and marked his debut with a fine finish in the defeat at Liverpool last month.

Isak combines a 6ft 4in frame with brilliant dribbling skills and mobility, attributes which appear tailor-made for the Premier League. His willingness to press and take on defenders will appeal to a Newcastle fanbase who have long loved number nines.

Liverpool spent big on their forward line evolution this summer, with Darwin Nunez arriving as the club’s new record signing.

Nunez signed in a deal worth an initial £64m, but with add-ons the figure could reach £85m and move past the £75m record arrival of Virgil van Dijk in 2018.

The Uruguay international shot to prominence with a prolific campaign for Benfica last season, in which he scored 34 goals in all competitions to finish as the Primeira Liga’s top scorer and win the division’s Player of the Year accolade.

He scored six goals in the Champions League – including in both legs of the Portuguese side’s quarter-final exit to Liverpool – surpassing Nuno Gomes’ Benfica record of 5 set in 1998/99.

A goal and an assist on his @premierleague debut 👏 pic.twitter.com/b3sGchY1aj

The 23-year-old’s profile adds a new option to the Reds line-up, with Nunez an out-and-out centre-forward with the presence to bully backlines with pace and power.

He made an instant contribution with goals off the bench against Manchester City (Community Shield) and Fulham, before a red card earned him a three-match suspension and halted his progress.

Now back and available, Jurgen Klopp will be hoping his investment is repaid in the currency of goals in the coming weeks.