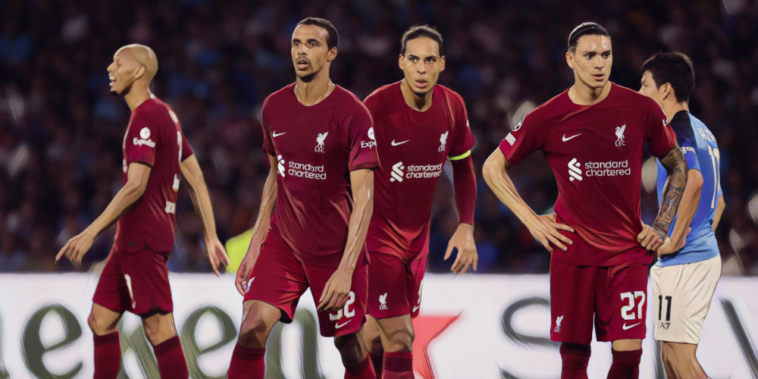 Liverpool’s Champions League campaign began in disaster as the Reds were thrashed 4-1 at Napoli in their group stage opener.

Jurgen Klopp’s team were 3-0 down at half-time as Napoli cut apart the visitors and the scoreline could have been even greater had it not been for a saved penalty from Alisson and goal-line clearance from Virgil van Dijk.

The defeat continued an indifferent start to the season for Liverpool, who have won just twice in seven fixtures in all competitions, and Carragher has questioned whether recent results suggest the ‘cycle’ of Klopp’s side is at its end.

“The problem tonight is not that game. Forget this game,” he said on CBS.

“For me the big worry is that, ‘is this almost something that’s going to carry on through the season? Is this an end of a cycle?

“Liverpool massively got the transfer ideas in the summer wrong because this team is so far off and it has been at full pelt for five or six years.

“Is this a massive drop off physically because of what’s happened over the last five or six years the way they’ve played, how intensive they’ve been. And can this team get it back?”

Carragher blasted the club’s defending in Naples and called the manner of the goals conceded ‘kids stuff’, admitting urgent changes are needed if results are to improve in the coming weeks.

“It’s embarrassing. It really is,” Carragher said of Liverpool’s defending.

“I said before it’s kid stuff and this is the big problem with Liverpool right now. They’ve built their success on intensity on the ball, which means the opposition can’t get the head up to put the ball over.

“So your team’s always tight. Always really compact. At times [there’s a] risk, but you get an energy on the ball, that energy is not there now, so that back four has to adapt and it has to go back three or four yards.

“That’s all we’re talking about. But if they keep playing [like that] they’re gonna have a big problem in terms of the Premier League this season and qualifying for the next round of the Champions League, because that is suicide football.”