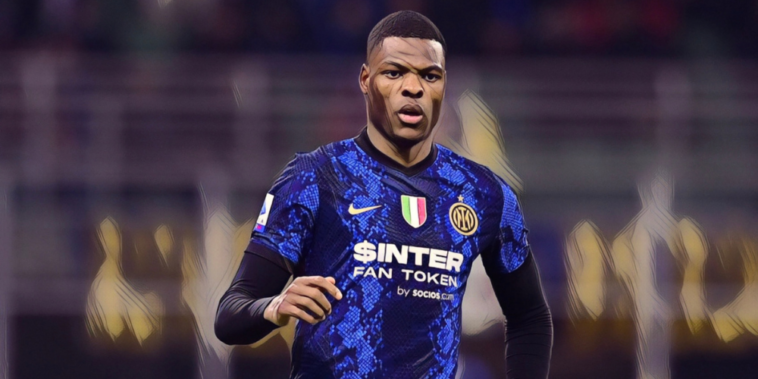 Chelsea are interested in signing Denzel Dumfries and are ready to fight Manchester United for the signature of the Inter Milan defender.

Inter Milan are prepared to allow Dumfries to leave the club this summer and the right-back’s availability has attracted interest from the Premier League, with Chelsea now considering a move to sign the 26-year-old.

La Gazetta dello Sport are reporting that the Blues are preparing a bid of around £21m for the Dutch defender as Thomas Tuchel looks to add options to a backline depleted by the exits of Antonio Rudiger and Andreas Christensen.

Manchester United have also been credited with an interest in Dumfries, though Chelsea’s pursuit of the full-back could be aided by Inter’s desire to bring Romelu Lukaku back to the San Siro this summer.

Lukaku is keen to quit Chelsea and return to the Italian side after a difficult debut season at Stamford Bridge and the two teams have held talks over a potential loan deal.

Dumfries signed for Inter in a €15m deal from PSV Eindhoven last summer after impressing for the Netherlands at Euro 2020. He made 21 league starts for the Nerazurri last season, scoring five goals and providing four assists in Serie A.

Former Inter forward Christian Vieri last week revealed his belief that Dumfries and Milian Skriniar were up for sale this summer as the club look to balance the books and raise funds for their summer recruitment.