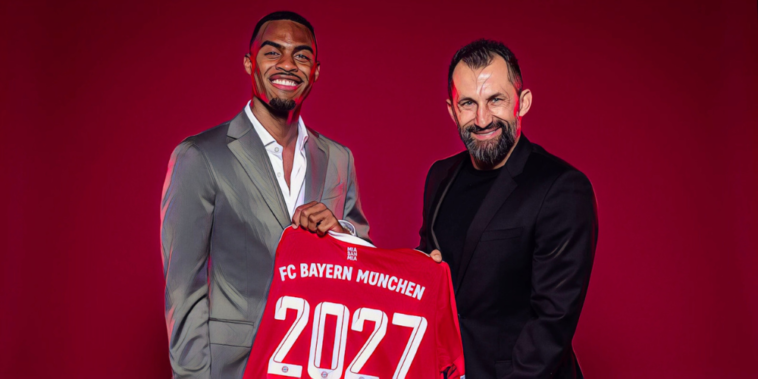 Premier League clubs are once again expected to be the biggest spenders of the transfer window and have wasted no time in flexing their financial muscle this summer.

However, clubs across Europe are quietly conducting their own business in a bid to improve and we’ve already seen several eye-catching additions at sides across the continent.

We’ve picked out five of the most interesting deals across Europe’s major leagues so far this summer.

Bayern Munich continue to dominate the landscape in German football and secured a tenth straight Bundesliga title during the 2021/22 campaign.

In a bid to evolve the German champions have moved quickly in this summer’s transfer window, raiding Ajax to sign both Noussair Mazraoui and Ryan Gravenberch.

Mazraoui has signed on a free transfer and will look to hold down the right-back position in Bavaria, though it is the signing of Gravenberch that will create most excitement at the Allianz Arena.

The 20-year-old is viewed as one of Dutch football’s most exciting talents and has shone since his emergence from Ajax’s academy system, making more than a century of appearances for the Amsterdam outfit and winning three Eredivisie titles.

Already established as a full Dutch international with ten senior caps, he has been likened to Paul Pogba for his mix of athleticism and technical ability in midfield.

Bayern have secured the signing of one of Europe’s most coveted young players for a reduced fee of just €18.5m (£16m), which could rise to €24m (£20m), and Gravenberch could star in the side’s midfield for the next decade.

Erling Haaland’s inevitable exit meant Borussia Dortmund were always set to be in the market for a forward this summer and one of Europe’s best-ran clubs wasted no time in agreeing a deal for Karim Adeyemi.

Adeyemi is the latest exciting youngster to emerge at Red Bull Salzburg with the Austrian champions have been a production line for top talent in recent seasons.

🗣️ "His strong finishing and incredible pace will make a valuable addition to our attacking play."

The 20-year-old enjoyed a breakout campaign in 2021/22 to score 25 goals in 39 appearances in all competitions, including netting three times in the Champions League for Salzburg.

Capped four times for Germany at senior level, he will return to his homeland with a point to prove after leaving Bayern Munich’s academy system as a teenager.

He will hope to follow in the footsteps of the man he has replaced, Haaland, in making an immediate impact after swapping Salzburg for the Westfalenstadion.

Real Madrid have won the race to sign Aurélien Tchouaméni from Monaco, landing one of Europe’s most exciting young midfielders ahead of interest from Liverpool and Paris Saint-Germain.

Tchouaméni becomes the second major signing of the transfer window for the European champions, following the free transfer capture of Antonio Rudiger from Chelsea.

Carlo Ancelotti’s side have invested around €100m to secure the signing of the 22-year-old, who will be tasked with evolving the Real Madrid midfield alongside compatriot Eduardo Camavinga, as the Spaniard’s prepare for life after their multiple Champions League winning trio of Casemiro, Toni Kroos and Luka Modric.

Tchouaméni has starred since signing for Monaco from Bordeaux two seasons ago and was named as Ligue 1’s Young Player of the Year following a brilliant 2020/21 campaign, in which he ranked second in the division for tackles won.

The midfielder impressed once again last season to earn a second successive inclusion in the divisional Team of the Year and has established himself as a central part of Didier Deschamps’ plans with France, despite a wealth of competition for places in Les Bleus’ engine room.

Europe’s elite clubs have monitored the progress of Adam Hlozek in recent seasons with the Czech forward having emerged as one of his nation’s brightest prospects.

Hlozek became Sparta Prague’s youngest league debutant aged just 16 in 2018 and finished as the joint-leading scorer in the division during the 2020/21 campaign with 15 goals, despite missing large periods with injury.

The 19-year-old has already amassed 132 games at club level, scoring 40 goals and providing 36 assists. The multi-functional forward comfortable on both flanks or as a supporting striker and he will now hope to link-up with compatriot Patrick Schick at Leverkusen.

19-year-old Adam Hložek joins the Werkself on a five-year deal.

He provided 23 goal involvements (9G, 15A) in 33 league game last season and Leverkusen sporting director Simon Rolfes believes his side have secured the signing of a talent who can add to their attacking threat.

“He is a player who can develop a great goal threat as a hanging striker from a central position and also coming from the wing,” Rolfes said, as per The Athletic.

“His versatility, power and, above all, his finishing power will give our offensive game further possibilities for variation.”

Danilo Pereira’s prolific record for Jong Ajax failed to provide the forward with a sustained run in the senior Ajax side, with the Brazilian deciding to depart the Johan Cruyff Arena this summer.

The 23-year-old had scored 17 league goals during a successful loan spell at FC Twente in 2020/21, but found the presence of Sebastien Haller a difficult obstacle to navigate upon his return to Ajax this season.

Pereira made just 13 league appearances last season, of which just one came from the start, and scored twice for Ajax, though added a further six goals in just two starts in KNVB Cup.

It will be an honor to defend the @feyenoord shirt! Very happy and motivated with this new challenge! May God bless us and seasons of many joys
! 🙏🏽🔴⚪️⚫️ pic.twitter.com/cPhdYcnazI

Despite that record he failed to win favour under Erik ten Hag and has departed on a free transfer, signing for fierce rivals Feyenoord ahead of the 2022/23 campaign.

The Rotterdam outfit finished a distant third behind Ajax and PSV Eindhoven last season and will hope the presence of Danilo can help bridge the gap to his former side. He’s unlikely to receive a warm welcome upon his return to Amsterdam.