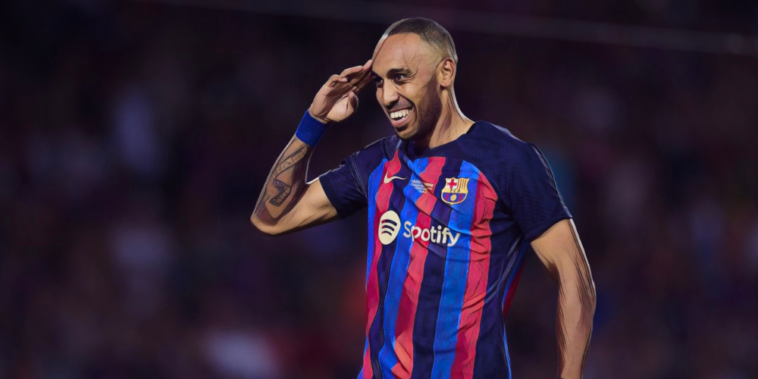 Chelsea’s move for Pierre-Emerick Aubameyang is ‘progressing’ ahead of the transfer deadline as talks continue for the Barcelona forward.

Thomas Tuchel wants to bring in a centre-forward as Chelsea’s active summer spending continues, with the club having been in negotiations with Barcelona over a deal for Aubameyang.

The deal was complicated following an incident that saw Aubameyang sustain a broken jaw this week, after he was assaulted during a violent robbery at his home in Barcelona. The injury is expected to sideline the 33-year-old for a ‘few weeks’ but will not impact his move to Chelsea.

Chelsea new official bid for Pierre Aubameyang has been received by Barcelona right now. As mentioned in the afternoon, includes again Marcos Alonso as part of the deal. 🚨🔵 #CFC

According to Fabrizio Romano, Chelsea’s deal for Aubameyang is believed to be worth a fee of £10m, with Marcos Alonso set to sign for Barcelona in part-exchange.

The transfer will see Aubameyang return to the Premier League after a successful spell at Arsenal, in which he scored 92 goals in 163 appearances for the Gunners.

Tuchel previously worked alongside the Gabon international at Borussia Dortmund, where he scored 79 goals across two seasons under the German’s management.

The exits of Romelu Lukaku and Timo Werner have left Chelsea short of centre-forward options, with Kai Havertz having failed to score or assist in five Premier League appearances so far this season.

All parties confident to complete the deal before Deadline. #FCB pic.twitter.com/SPLP64n1AJ

Aubameyang could become Chelsea’s seventh signing of a busy summer that has seen new owner Todd Boehly invest more than £220m in the squad.

Raheem Sterling, Marc Cucurella, Kalidou Koulibaly, Carney Chukwuemeka and Gabriel Slonina have all arrived at Stamford Bridge this summer, alongside the £75m deal for Leicester centre-back Wesley Fofana which was confirmed on Wednesday.