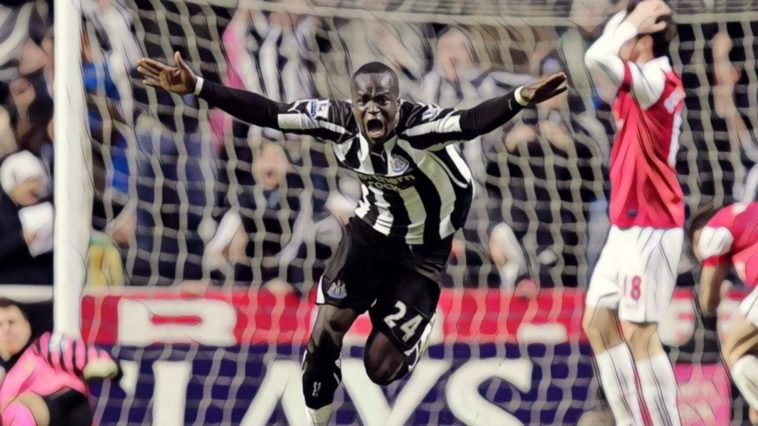 Newcastle United are not a club short on cult heroes. Over the years, St James’ Park has seen them arrive in all shapes and sizes.

From the magic and mayhem of Faustino Asprilla, the boisterous and bolshie Temuri Ketsbaia, and the cherished inspiration of Jonás Gutiérrez.

Nothing defines a club better than who the fans take a shining to – men who would perhaps play out a mediocre career on the football pitch save for one moment of utter brilliance that captures the imagination of the terraces, forging memories long after they move on for pastures new. In an instant, a player can cement themselves as a fan favourite.

A lofted cross is sent into the 18-yard box by Joey Barton. The ball is cleared from the penalty area by the head of Gael Clichy. It sits up nicely on the volley for Cheick Tioté. Cult hero status: secured.

Newcastle United completed perhaps the greatest comeback in Premier League history on 5 February 2011, coming from 0-4 down at home to Arsenal. The final nail in the coffin for the Gunners was dealt by the left boot of the Ivorian and the only goal Tioté would ever score for the club.

An unassuming and shy character, Cheick Tioté arrived on Tyneside having made the move from Dutch champions FC Twente – relinquishing the opportunity to play Champions League football in order to follow in the footsteps of his idol, Michael Essien, and make a name for himself in the English top flight.

Under the tutelage of Steve McClaren, during a season which saw the Englishman leap from wally to wizard as he led the club from Enschede to their first league title, Tioté formed part of a formidable midfield trio alongside Theo Janssen and Wout Brama. A midfield that gave the side a rigid and resolute base allowing the attacking trio of Bryan Ruiz, Miroslav Stoch and Blaise Nkufo to roam, create and attack however they pleased.

But, before the first notes of the Champions League anthem had begun to ring out around De Grolsch Vester, Tioté made a £3.5 million switch to St James Park to bolster the base of the Geordie midfield, firstly alongside Kevin Nolan and Joey Barton before striking up a devastating partnership in the middle of the park with Yohan Cabaye.

Cleverly dismantling the game to its most basic elements, Tioté built his reputation upon uncompromising yet uncomplicated play, tackling mercilessly and feeding the ball to Cabaye to begin an attack.

Tioté was seen as a vital cog during the north west side’s impressive 2011/12 campaign, when the team finished fifth under Alan Pardew – a quiet, consistent, stabilizing presence at the base of a midfield that would chase for the Champions League right up until the final day of the season.

His performances during that Premier League season led to rumoured bids from both Manchester United and Chelsea of around the £25 million mark – each rebuffed in its entirety as Tioté had his sights set on stepping out for the club during their Europa League adventure the following season.

The subsequent year saw much of a Jekyll and Hyde performance from the tenacious Ivorian ball winner as his displays in the league dipped, although this is likely due to the absence of his regular midfield partner Yohan Cabaye through injury. However, in European competition Tioté shone and was a key factor in the Geordie side reaching the quarter-finals of the tournament, narrowly edging the likes of Metalist Kharkiv and Anzhi Makhachkala in the knockout rounds, before succumbing to Benfica in a 4-2 aggregate defeat.

🗣 @SteTudor123 on what made the 'inconsistent' David Ginola such a lovable flair player.

The awarding of two sizeable contracts on Tyneside – Tioté received a six and half year deal to tie him down until 2017, while manager Alan Pardew was rewarded for the club’s league finish in 2012 with an eight year deal that would run through 2020 – preceded the almost immediate decline of both club and player. Pardew jumped ship for Crystal Palace in 2014, leading the club to take a dramatic slide under caretaker John Carver. The arrival of Steve McClaren the following summer saw Tioté linking up with a tactician who placed so much faith in him during their shared title success at FC Twente.

By 2015 that magic was long gone. What subtle alchemy McClaren had invoked during his time in the Netherlands had abandoned him and Tioté’s position in the starting XI became less and less assured with Gini Wijnaldum, Moussa Sissoko and Vurnon Anita eating up the lion’s share of minutes in the midfield third. Before even the slightest hint of the first April shower, McClaren was handed his P45 and Rafael Benitez took the reins in an attempt to fight off relegation, but to no avail.

Following the club’s drop down to the Sky Bet Championship, Cheick Tioté would make one final starting appearance at the beginning of the 2016-17 campaign in a 1-1 with Aston Villa before moving onto Beijing Enterprise in the Chinese First Division. Benitez had made the decision in the summer to retain Tioté as a squad player for their promotion push but after seeing himself fall down the pecking order to Jonjo Shelvey, Jack Colback and Isaac Hayden, the time felt right for Tioté to move on.

Unfortunately, fans are left to take a eulogistic approach to their fond remembrance of the Ivorian. Unanswered questions of what else the Ivorian midfielder could have gone on to achieve fill the minds of supporters from the north east of England, along with Enschede, Brussels and Beijing. Just weeks shy of his 31st birthday, Tioté took to the field at his club’s training complex and collapsed, suffering a cardiac arrest. According to reports the club failed to have emergency cardiac equipment on hand for unfortunate instances such as these, meaning he sadly never stood a chance.

Though Tioté’s love affair with the city of Newcastle may have ended in acrimony and disappointment, fans should remember the midfield stalwart for his efforts in the impressive campaign of 2011-12. With one fell swoop of his left boot he repaid his £3.5 million transfer fee in full and ensured value for money for any fan who purchased a ticket for that afternoon performance against Arsenal

They say you only live once but you die twice; once when your heart stops beating, once when your name leaves a person’s mouth for the final time on this earth. Cheick Tioté’s quick thinking and hopeful pot shot attempt at St James’ Park on February 5th, 2011 definitively ensures he’ll live on in the hearts and minds of Newcastle supporters for generations to come.

Read: Tino Asprilla could win matches all on his own – if he was arsed

See Also: Glamourous Ginola was a scorer of great goals, but not a great goal scorer