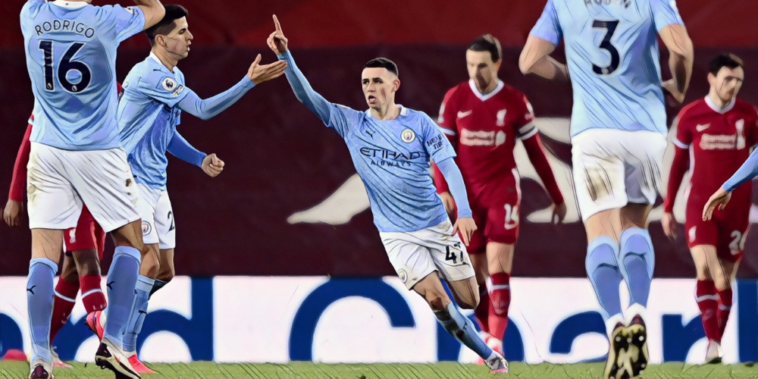 Manchester City have been crowned as champions of England for the third time in four seasons, defeat for Manchester United against Leicester leaving the league leaders with an unassailable lead at the summit.

Pep Guardiola’s team have been head and shoulders above the rest of the division for much of the season, bouncing back from an indifferent 2019/20 and shaky start to the current campaign to emerge as the Premier League’s finest once again.

It is another triumph for a City side who have strengthened their claim as one of the best of the Premier League era, with the prospect of the Champions League to follow ahead of a maiden final against Chelsea later this month.

Following the club’s coronation as Premier League winners, we look at six games that shaped the club’s title-winning 2020/21 season.

The opening weeks of the Premier League season were filled with shock results including this stunning success for Leicester at the Etihad, the Foxes running riot in a ruthless attacking performance.

Riyad Mahrez opened the scoring for City against his former side after just four minutes, only for Leicester to hit back in stunning style to become the first team to score five times against a Pep Guardiola managed outfit.

Jamie Vardy scored a hat-trick including two penalties, with James Maddison and Youri Tielemans also on the scoresheet, the latter netting from Leicester’s third penalty of the game as City’s defensive shortcomings were exposed in an Etihad embarrassment.

It was the first time in six years that a team had conceded three penalties in one fixture, the centre-back pairing of summer signing Nathan Ake and Eric Garcia woefully exposed against Leicester’s vibrant frontline.

Crucially, this was the club’s last fixture before the signing of Ruben Dias, the club-record addition at centre-back making a huge difference to his side’s fortunes.

Defeat to Leicester and draws with Leicester, West Ham and Liverpool had left City playing catch up to the sides setting the early pace, Guardiola’s team in 10th as they travelled to face Tottenham in November.

City were in need of a result but found themselves on the receiving end of a Jose Mourinho masterclass, as Spurs defended brilliantly before punishing the visitors on the counter-attack.

Goals from Son Heung-Min and Giovani Lo Celso secured three points for the north London side, who moved eight points clear of their beaten opponents at the top of the Premier League.

Guardiola’s team were 13th in the division and a long way from looking like title contenders, with changes needed to get the club back in the mix at the top.

The game that Guardiola acknowledged as the turning point in his side’s season, City held to a frustrating home draw with struggling West Brom at the Etihad.

Ilkay Gundogan opened the scoring after half an hour, though Ruben Dias’ unfortunate own goal brought the battling Baggies level just minutes before the half-time whistle.

City boasted 77% of the possession and fired a huge 26 shots on goal but found no way through the West Brom resistance, goalkeeper Sam Johnstone making two brilliant saves in stoppage-time to rescue a point for the visitors.

Guardiola’s side had not conceded since the defeat to Spurs – a total of 608 minutes in all competitions – though their failure to find a breakthrough meant more tweaks were needed if the club were to finding a winning formula on a consistent basis.

Speaking in February, Guardiola admitted the clash prompted a rethink from his coaching staff.

“It was the game after – West Bromwich – that we could win because of three incredible chances at the end. After that game I had a feeling this isn’t a team I can recognise. I didn’t like what I saw.

“We started to rebuild and reconstruct the team from that point. We had success in the past and [we had to] come back on our positional play, move the ball quicker, do more passes, stay more in position, run less with the ball.”

“We could have won at Tottenham and West Bromwich, but I didn’t like [the way we played]. We talked with Juanma [Lillo], Rodolfo [Borrell], Manel [Estiarte], Txiki [Begiristain] and I said we have to come back to our first principle.

City bounced back from the draw and won each of their next 15 league fixtures to open up a lead at the top that ultimately proved impossible to catch.

The draw with West Brom was followed by wins over Southampton and Newcastle, before a difficult-looking trip to face Chelsea at Stamford Bridge.

Chelsea had won each of the previous two meetings in west London but proved no match for the visitors who produced a sublime first half performance, racing into a three-goal lead inside the opening 34 minutes.

De Bruyne netted a third against his former side after Raheem Sterling’s effort came back off the post, Guardiola’s side rampant in their best performance of the season to date.

Callum Hudson-Odoi’s stoppage-time consolation was the only blemish on a pleasing performance, as City moved within four points of leaders Liverpool with a game in hand.

City’s winning streak extended to nine consecutive fixtures ahead of the trip to face champions Liverpool, the Reds having wobbled since topping the table at the turn of the new year and in need of a result to keep in touch with the in-form visitors and league leaders.

Liverpool had not lost to City on home soil since April 2003, but Guardiola’s side ended their Anfield hoodoo in comprehensive fashion, securing a statement result to take a definitive grip on the title race.

Ilkay Gundogan responded to missing a first-half penalty to open the scoring four minutes into the second half, reacting to Phil Foden’s spilled shot to put the visitors into the lead.

Mohamed Salah capitalised on Ruben Dias’ mistake to win a penalty he subsequently converted, before the game turned on two catastrophic errors from Liverpool goalkeeper Alisson.

The Brazilian twice conceded possession with a slack passes, the first seeing Gundogan net his second of the game before gifting the ball to Bernardo Silva, who crossed for Raheem Sterling to head home.

Foden’s sensational strike made it four and sealed a nightmare night for the defending champions, a fixture which symbolised the passing of the Premier League torch.

Pep Guardiola’s side’s 15-game winning streak between December and March ultimately provided City with an uncatchable lead, though a hard-fought win over Aston Villa spared any late nerves in the title race.

Two defeats in five fixtures – to Manchester United and Leeds – offered the chasing pack faint hope, and when City followed their loss to Leeds by falling behind early at Villa Park there were fears over an improbable collapse.

John McGinn scored inside the opening 20 seconds to hand Villa a shock lead, though City turned the game around before breakthrough goals from Phil Foden and Rodri.

The result moved City 11 points ahead of Manchester United having played a game more, an important result in keeping the chasing Red Devils at bay in their pursuit of the Premier League title.