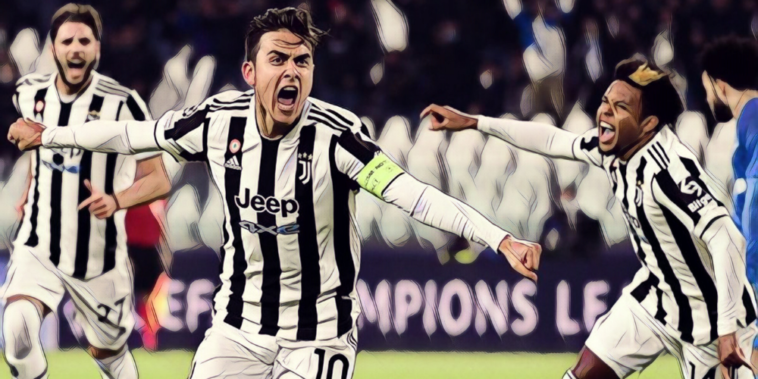 Matchday four in the UEFA Champions League saw several sides secure their passage to the knockout stages, and we’ve delved through the action to pick out some of the competition’s leading performers.

Elsewhere there was a milestone moment for Robert Lewandowski and both Juventus and Ajax maintained perfect records in their respective groups.

Following the midweek action, here is our Champions League Team of the Week for matchday four.

Gianluigi Donnarumma produced another fine Champions League performance on only his second start in the competition, the goalkeeper crucial in a below-par PSG leaving RB Leipzig with a point.

The Parisian side had fallen behind inside eight minutes when Christopher Nkunku came back to haunt his former team, before RB Leipzig were handed the chance to double their lead from the penalty spot.

Gianluigi Donnarumma has now saved 16 penalties in his senior career.

And a reminder that he's won 5/5 penalty shoot-outs. 🤯 pic.twitter.com/GJDGpnQD5k

The draw eliminates Leipzig and leaves PSG in strong shape to qualify, the trip to Manchester City in matchday five seemingly set to decide who crucially finishes top of Group A.

Liverpool sealed progress to the knockout stages with two games to spare after beating Atletico Madrid at Anfield, with Jurgen Klopp’s side having cruised through a group deemed amongst the most challenging after the initial draw.

The win over the Spanish champions in matchday four was kickstarted by two moments of quality from Alexander-Arnold, his first assist of the evening a wonderfully inviting cross for Diogo Jota to head home from close range.

Another masterclass from Trent Alexander-Arnold last night. He now has more assists than any other defender in the Champions League since his debut in the competition. He now has 50 assists and 10 goals in 190 games for the club.

There is arguably no better player in world football when free on the inside-right channel and the right-back turned provider once again for Liverpool’s second, a driven cross turned in by Sadio Mane to double the host’s advantage.

Job done for Klopp and his side, who can turn their attentions firmly towards the Premier League after qualifying as group winners.

Bailly made just his second appearance of the season and was arguably Manchester United’s best player against Atalanta, the defender bailing out the Red Devils on several occasions as his teammates around him struggled in Italy.

The Ivorian’s recovery pace was crucial to Ole Gunnar Solskjaer’s side leaving Atalanta with a point, though he will need greater support if his side are to secure a result in this weekend’s Manchester derby.

With Raphael Varane out through injury and Harry Maguire in dire form at present, Bailly must retain his place on the evidence of his midweek Champions League showing.

Virgil van Dijk looked back to his imperious best as Liverpool beat Atletico Madrid 2-0 at Anfield, the Dutch defender producing a dominant performance against the Spanish champions.

Van Dijk won 100% of his duels both in the air and on the ground, his strong showing contributing to a clean sheet and the Reds’ progress to the knockout stages.

The 30-year-old has not quite reached his pre-injury levels since his long-awaited return to the side, but this was an encouraging performance and one that indicated Van Dijk remains one of the very best in the business.

Cancelo is surely as close to a guarantee as you can get in a Pep Guardiola side, the full-back brilliant once again in a Manchester City team that bounced back from the weekend defeat to Crystal Palace with a convincing win against Club Brugge.

The Portugal international came close to scoring himself after bursting clear before hitting the post, later showcasing his creative threat after assisting three of City’s four goals at the Etihad.

Cancelo rolled a cross into the path of Phil Foden for the opening goal, before a curling a cross perfectly onto the head of Riyad Mahrez to restore the host’s advantage after the break.

He claimed his third assist of the contest after swapping to right-back, driving forward across the penalty area before teeing up Gabriel Jesus.

Any side with aspirations of winning the Champions League this season will need to find a way past Bayern Munich’s winning machine, the Bundesliga champions extending their formidable record in Europe this season with a 5-2 thrashing of Benfica at the Allianz Arena.

It’s now 17 goals from just four fixtures for the Bavarians, whose ruthless punishing of Benfica was orchestrated by a magnificent performance from Joshua Kimmich.

Kimmich protected his back four in fine fashion with five ball recoveries, whilst the range and accuracy of his passing dissected the Portuguese side time and time again and led to three of Bayern’s goals, finding the runs of Serge Gnaby, Leroy Sane and Kingsley Coman.

Georgino Wijnaldum has publicly discussed his frustration with his limited role at Paris Saint-Germain this season, having completed 90 minutes of league action on only two occasions since his free transfer arrival from Liverpool.

The Netherlands international has had to be patient at PSG after being an indispensable member of the Liverpool midfield, but he provided Mauricio Pochettino with a reminder of his qualities during the Ligue 1 side’s 2-2 draw with RB Leipzig.

Happy to contribute with ⚽️⚽️ goals, but unfortunately it wasn't enough for the win 😔 pic.twitter.com/Whc5WyBpWc

Wijnaldum scored his first goals for PSG with a brace in Germany, his movement off the ball brilliant as he turned home Kylian Mbappe’s cross for a first, before ghosting into space to head home a second.

The 30-year-old’s goals came alongside a performance of trademark midfield aggression and energy, and Wijnaldum will hope this can be the start of a more prominent role in Paris.

Pedro Gonçalves scored twice as Sporting Lisbon ran riot in the first half to thrash Besiktas at Estadio Jose Alvalade, the Portuguese side’s convincing back-to-back wins over Besiktas having given them a real chance of reaching the knockout stages.

Gonçalves was sensational to finish as the Primeira Liga’s leading scorer during Sporting’s 2020/21 title triumph and has continued his rich vein of goalscoring form this time around, taking his haul to the season to six with a well-taken brace in matchday four.

The 23-year-old – who made just one League Cup appearance during a two-season spell at Wolves – opened the scoring from the penalty spot, before a fine feint and finish doubled Sporting’s advantage.

The midfielder is already attracting attention from Europe’s elite, though his immediate focus is on securing Sporting’s passage to the last 16, with the Portuguese side now level on points with Borussia Dortmund ahead of their meeting in matchday five.

Juventus’ form in Europe has juxtaposed their disappointing domestic performances, with the Bianconeri extending their Champions League record to four wins from four against Zenit St Petersburg.

Paulo Dybala – captaining the side in Georgio Chiellini’s absence – was the star of the show for the Italians, scoring twice and creating another in an impressive 4-2 victory at the Allianz Stadium.

Two goals and an assist for Paulo Dybala tonight 🔥 pic.twitter.com/WurdiArUYK

The Argentine rifled home a loose ball to open the scoring, before holding his nerve to convert a spot-kick at the second attempt after encroachment, having dragged his initial effort wide of the post.

Dybala created the fourth with a delicate lofted pass into Alvaro Morata, the win sealing Juventus’ place into the knockout stages.

Dybala’s double saw him move past Michel Platini for Juventus goals, whilst he also moved above Filippo Inzaghi as the club’s third-highest goalscorer in the Champions League era.

Ronaldo has now scored vital goals in each of the club’s past three European fixtures, securing results their performances have perhaps not deserved with Ole Gunnar Solskjaer’s side top of Group F on the head-to-head ruling as things stand.

CR7 has started the #UCL campaign on fire 🔥

The competition’s record goalscorer provided two moments of brilliance around the penalty area to score a brace, securing his side a point with an exquisite volley in the dying seconds after Atalanta had dominated the second half.

United remain in pole position to reach the knockout stages, but performances must improve with Ronaldo’s rescue acts becoming all too common.

Robert Lewandowski celebrated becoming a Champions League centurion in the only way he knows how, providing another masterclass of finishing in Bayern Munich’s 5-2 thrashing of Benfica.

Lewandowski helped himself to a hat-trick to make it eight goals in four games during this season’s competition, heading home a first before lifting two delicate finishes over the goalkeeper to claim the match ball.

There was even time for a dreadful spurned penalty from the Poland international, a rare blot on the copybook of a footballer who now has 81 goals in his 100 Champions League appearances.

No player has ever scored more in their first 100 games amongst Europe’s elite, with Lewandowski even outscoring the likes of Cristiano Ronaldo and Lionel Messi.