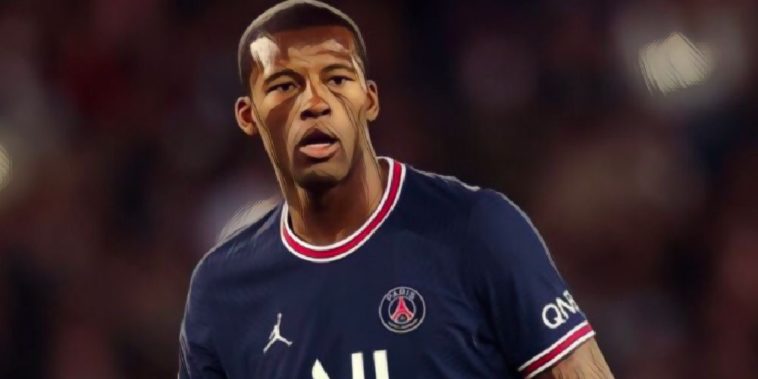 Gini Wijnaldum has revealed that he’s not ‘completely happy’ at Paris Saint-Germain, having joined the club from Liverpool over the summer.

The Dutchman opted to depart the Reds at the end of the season after five hugely successful years on Merseyside, during which time he played a pivotal role in helping the club to a Premier League title and to a Champions League triumph.

With his contract expiring over the summer, the midfielder had looked all set to link up with compatriot Ronald Koeman at Barcelona, before PSG swooped in with a more tempting offer in order to persuade him to make the move to Paris.

His arrival at the Parc des Princes was one of many high profile signings made by the Ligue 1 giants in the summer window, as the likes of Gianluigi Donnarumma, Sergio Ramos and Lionel Messi all arrived on ‘free’ transfers, with Inter Milan’s Achraf Hakimi the club’s major outlay.

With those incomings bolstering an already immensely talented squad, there has unsurprisingly been fierce competition for places in the opening weeks of the season, with manager Mauricio Pochettino attempting to get the best out of his star-studded line-up.

In order to accommodate the likes of Messi, Neymar and Kylian Mbappe, the former Tottenham Hotspur boss has tended to opt for more defensive-minded central midfielders, with Idrissa Gueye and Ander Herrera getting the nod over Wijnaldum thus far, with Marco Verratti also ahead in the pecking order.

That has seen the former Newcastle United man largely feature off the bench in recent games, with the 30-year-old admitting it is a far from ideal scenario, although he is keen to ‘turn it around’.

“The situation is not what I wanted. I have played a lot in recent years, was always fit and also did very well. This is something different and that takes getting used to. I was really looking forward to the new step and then this happens. It is very difficult.

“That’s football and I’ll have to learn to deal with that. I’m a fighter. I have to stay positive and work hard to turn it around.”