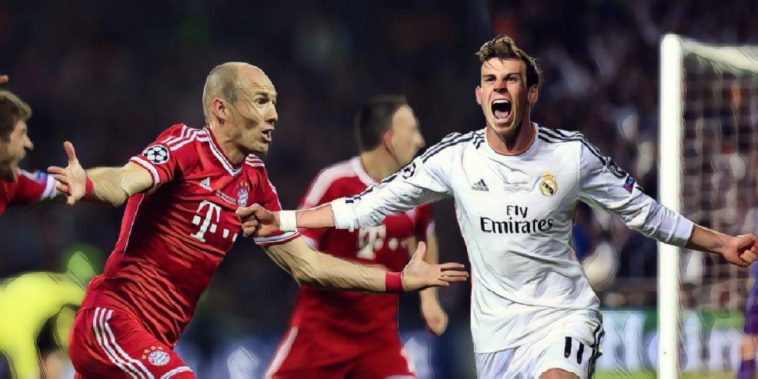 A competition that pits European football’s elite together to determine the finest side on the continent, the Champions League has long been the pinnacle of success in club football.

The leading sides from respective nations across Europe do battle, so putting together a winning streak in the competition is far from easy. We’ve looked back at some of the most successful sides in Champions League history, who have managed to maintain impressive runs of momentum…

Borussia Dortmund would embark on a memorable run in the mid-nineties, a run of consecutive wins that would see the club crowned champions of Europe for the first time in their history.

Ottmar Hitzfield’s side actually finished second in their group, level on points with Atletico Madrid, though it would be an entertaining 5-3 victory over Steaua Bucharest in the final fixture of the group stage that would begin their winning run.

Dortmund would beat Auxerre home and away at the quarter-final stage, before also achieving the same feat with a pair of 1-0 wins over Sir Alex Ferguson’s Manchester United in the last four.

Facing a formidable Juventus side featuring the likes of Zinedine Zidane, Didier Deschamps and Christian Vieri in the final, the underdogs would secure a sixth successive win to lift the Champions League for the first time with a 3-1 victory in the Olympiastadion in Munich.

Their defence of the crown would begin with consecutive group stage victories over Galatasaray and Sparta Prague the following season, before a Hernan Crespo goal condemned the club to a 1-0 defeat at Parma in October 1997.

The only side in this list not to have lifted the famous trophy during their winning streak, Louis van Gaal’s Barcelona side looked like genuine contenders to become European champions for just the second time in their history after winning nine consecutive fixtures in the 2002/03 season.

The Catalonian side would qualify from the first group stage with a perfect record from home and away fixtures against Galatasaray, Lokomotiv Moscow and Club Brugge, before being given a tougher looking test in the then second group stage round.

Drawn against Inter Milan, Bayer Leverkusen and Sir Bobby Robson’s Newcastle United, Barcelona would beat each of their three opponents before a goalless draw at the San Siro halted their winning run at nine matches.

The draw would be the only points the club dropped over 12 group stage fixtures, though their early form in the competition counted for little as they were eliminated by Juventus at the quarter-final stage.

Barcelona would once again put together a nine-match winning streak in the Champions League over a decade later, though this time it would come in a campaign that the club were crowned champions of Europe.

Having lost a thrilling group stage clash 3-2 at Paris Saint-Germain, Luis Enrique’s side would respond with back-to-back victories over Ajax before defeating Apoel Nicosia and PSG in the return fixture to qualify for the knock-out stages as group winners.

Premier League champions Manchester City were defeated home and away in the last-16 to set up a rematch with PSG in the last eight, where the Spanish giants would again win both legs to progress to a semi-final meeting with Bayern Munich.

An inspired Lionel Messi would to the damage as the German side were beaten 3-0 at the Nou Camp in the first leg, before a 3-2 defeat in Munich ended the club’s winning streak.

It would matter little, however, as Barcelona advanced to a final meeting with Juventus where they would win the Champions League for a fifth time in Berlin, completing a famous continental treble in the process.

Real Madrid would finally win their elusive La Decima in 2014, ending a 12-year wait for Europe’s biggest prize which would be the start of their equal-record 10-game winning run.

Their streak would begin in the semi-final stage, as Bayern Munich were beaten both home and away, the second leg a memorable 4-0 victory in Germany as Sergio Ramos and Cristiano Ronaldo both netted twice.

Those victories set up the first Champions League final meeting between two teams from the same city, as Real headed to Lisbon to face Atletico Madrid. Sergio Ramos’ 93rd minute goal would dramatically send the contest into extra-time, where Real would score a further three goals to beat their shell-shocked city rivals 4-1 and be crowned European champions for the tenth time.

The following season saw the club complete a flawless group stage campaign, including home and away victories over Brendan Rodgers’ Liverpool side to make it nine consecutive wins, before a tenth was secured with a 2-0 victory at Schalke in the first leg of their last-16 clash.

The Bundesliga side would ultimately end Real’s winning streak by winning a topsy-turvy second leg 4-3 at the Bernabeu, though Madrid would progress before seeing the defence of their crown ended by Juventus in the last four.

In the 2012/13 edition of the tournament, Jupp Heynckes’ Bayern Munich side would start their impressive winning streak by beating Juventus home and away in the Champions League quarter-finals before repeating the trick in the semi-finals against Barcelona, thrashing the two European giants by a combined aggregate score of 11-0.

Dortmund would await in the final in the first-ever all-German showpiece at Wembley, where a late Arjen Robben goal secured a fifth European title and complete a continental treble.

The club would continue their winning streak under the guidance Heynckes’ successor Pep Guardiola the following season, winning five successive group stage fixtures to take their tally to 10 before a home defeat to Manchester City in November 2013.