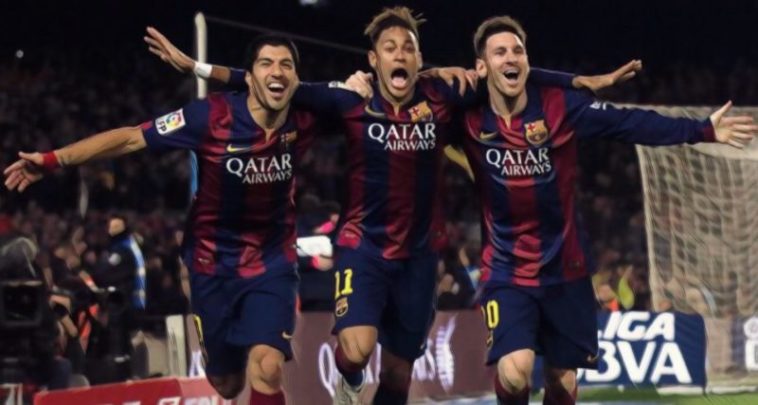 Few teams have enjoyed more success on the European stage in modern times than Barcelona.

Crowned winners in the final edition of the European Cup, the Catalan side have since lifted the Champions League on a further four occasions since its rebranding in 1992, with only Liverpool, AC Milan and rivals Real Madrid having ever enjoyed greater success on club football’s biggest stage.

The club’s Nou Camp home has played host to some of the tournament’s most iconic figures, and we’ve decided to look back at some of the greatest goalscorers to have donned the club’s famous colours.

The Brazilian international arrived at the Nou Camp in a highly anticipated deal in 2013, and after a season of adaptation to life in Europe began to demonstrate his undoubted talents on the Champions League stage.

Forming part of a famed attacking trio alongside Lionel Messi and Luis Suarez, Neymar would help fire Barcelona to a continental treble in 2014/15, scoring in the club’s Champions League final success over Juventus and finishing as the equal highest scorer in the competition.

He would be instrumental in one of the club’s greatest ever results, the miraculous 6-1 comeback victory over Paris Saint-Germain in 2017, eventually moving to the French side later that year in a world-record deal after scoring 21 goals in 40 European appearances for Barcelona.

10 of the best quotes about Brazilian superstar Neymar

Kluivert would announce himself to world football following his emergence as a teenager as part of Ajax’s Golden Generation, famously scoring the winning goal as an 18-year-old as the Dutch side won the Champions League in 1995.

Like many of that side he would depart for Europe’s giants, firstly to Milan before moving to Barcelona, where he continued to score prolifically.

In six seasons in Spain Kluivert would strike up a prolific partnership with Rivaldo and score 124 goals, 21 of those coming in the Champions League.

Despite his best efforts, however, the semi-final stage would be as far as the forward would go in Barcelona colours, as his bid to add a second European Cup to his haul ultimately failed to materialise.

The second of the famed Neymar-Messi-Suarez trio to make our list, the Uruguayan has been a formidable presence in the Barcelona forward line since moving to Spain from Liverpool in 2014.

Unpredictable but often brilliant, Suarez’s goalscoring exploits in Europe have dipped somewhat in recent seasons, though he remains key to Barcelona’s hopes of winning a sixth title and will hope to add to his record of 22 goals in 50 appearances during the current campaign.

15 of the best quotes about Luis Suarez

One of Brazilian football’s greatest players, Barcelona probably saw the peak years of Rivaldo during a hugely successful spell at the Nou Camp between 1997 and 2002.

That five-year spell saw Rivaldo crowned as World Player of the Year in 1999, as he led the club to back-to-back La Liga titles and twice into the latter stages of the Champions League.

Creative, skilful and with a penchant for the spectacular, Rivaldo would become a huge fan’s favourite to an adoring Nou Camp crowd.

Whilst success would ultimately not come in the form of a Champions League winner’s medal at the Nou Camp, Rivaldo would make his impact on the biggest stage and scored 25 goals for the club, the second-highest amount in Barcelona history.

Possessing more goals than the other four players on this list combined is Lionel Messi, who continues to expand the boundaries of what we thought was possible from an elite footballing talent.

A four-times winner of the competition, Messi has hit 112 Champions League goals in just 137 appearances, second only to great rival Cristiano Ronaldo in the tournament’s history.

The Argentine superstar has finished as the competition’s top scorer on six occasions, whilst no player has ever scored more than his eight Champions League hat-tricks.

Averaging 0.82 goals per game, Messi has comfortably the best ratio since the rebranding of the old European Cup. He continues to thrive on Europe’s biggest stage, and will be the central figure in the club’s pursuit of a sixth Champions League title this season.

10 of the best quotes about Lionel Messi