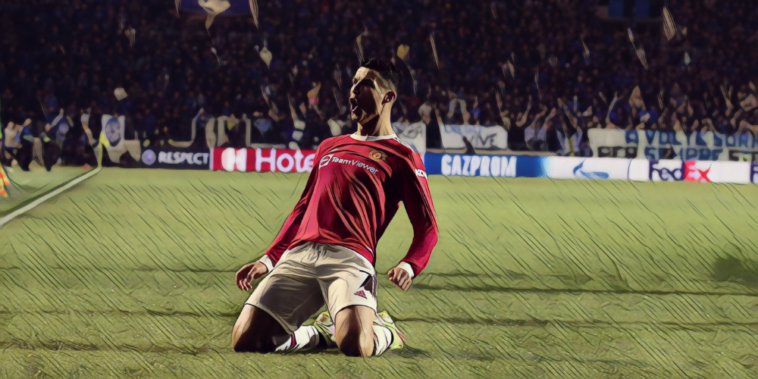 Our Champions League awards honour the best – and worst – of the European action from the midweek fixtures.

Just how many times can Cristiano Ronaldo come to the rescue for Manchester United?

For the third successive Champions League fixture, a late Ronaldo goal rescued his side a result, with the Portugal captain netting a stunning second goal in stoppage-time to secure the Red Devils a 2-2 draw at Atalanta.

How does he keep on doing this!

Such a clean volley to rescue Man Utd yet again! pic.twitter.com/UaVyRFQsy6

The narrative that Ronaldo’s arrival is more problematic than positive is beginning to look increasingly foolish, with the 36-year-old’s goalscoring genius papering over cracks rather than creating more in Ole Gunnar Solskjaer’s side at present.

Twice he hauled his side level with outstanding finishes against Atalanta, the second a wonderful volley from just outside the penalty area to produce his latest salvation act for Solskjaer.

Just where would the Red Devils – shambolic defensively and ineffective once again in midfield – be without Ronaldo this season? In truth, probably facing a Champions League group stage exit.

Lewandowski marked the occasion in signature fashion with a ruthless hat-trick for Bayern Munich, scoring three times as the Bundesliga champions dismantled Benfica at the Allianz Arena.

The Poland international was clinical once again – a dreadful missed penalty aside – as the Bavarians secured a 5-2 win on home soil, extending their record in this season’s competition to four wins from four with 17 goals scored.

Eight of those have come from Lewandowski, who is now the Champions League’s leading scorer and boasting a record of 22 goals from 16 games across all competitions already this season.

Lewandowski’s treble also saw him move to a staggering 81 goals from his 100 appearances at this level, more than both Cristiano Ronaldo and Lionel Messi managed at the same landmark and a Champions League record.

Recent reports have suggested Lewandowski could narrowly miss out to Messi for the Ballon d’Or, having cruelly missed out following the 2020 cancellation of the accolade when red-hot favourite to take the prize.

Each have strong cases to be crowned as the world’s finest footballer, but Lewandowski’s is one that grows ever stronger with each passing performance.

Bayern were brilliant during that aforementioned win over Benfica as the German giants scythed through the visitor’s defence on countless occasions, the laser-like passing of Joshua Kimmich finding the probing runs of a formidable forward line.

It’s the Bundesliga side’s second of the evening that earns our Goal of the Week accolade, as Kimmich, Lewandowski and Serge Gnabry all combined to score a delightful effort.

Kimmich’s perfect pass – on his supposedly weaker left side – released Lewandowski down the right channel, with the forward’s cut-back finding Gnabry in space.

A lethal combination for Bayern…

With the ball slightly behind him, Gnabry’s improvised flicked finish found the far corner, guiding the ball home with his heel to score his eighth goal of the season in all competitions.

RB Leipzig were dealt a difficult group stage draw after finding themselves paired with two of the pre-tournament favourites in Manchester City and Paris Saint-Germain, but many will have expected the Bundesliga side – semi-finalists in 2019/20 – to have made a stronger push for qualification.

Leipzig are, however, already out after taking just one point from their opening four fixtures, a 2-2 draw with Paris Saint-Germain confirming their elimination and leaving the Germans with a task to finish third and reach the Europa League.

Andre Silva spurned the chance to double Leipzig’s early lead against PSG after his tame penalty was saved by Gianluigi Donnarunna, the summer signing – scorer of 29 goals for Eintracht Frankfurt last season – far from convincing from the spot.

The miss proved costly as PSG fought back to turn the game around with Dominik Szoboszlai’s late equaliser for Leipzig following a second penalty, one greeted with bizarre celebrations given the circumstances, not enough to prevent European elimination.

Having likened Manchester United’s humiliating 5-0 defeat to Liverpool to heavyweight boxer Tyson Fury being put on the canvas, Ole Gunnar Solskjaer delved back into his list of sporting comparisons following Cristiano Ronaldo’s late equaliser at Atalanta.

The Norwegian compared the five-time Ballon d’Or winner to basketball great Michael Jordan, so often the saviour of the Chicago Bulls during the nineties.

“[Ronaldo] is one of the best that’s ever played this game. I’m sure this is the same feeling Chicago Bulls got with Michael Jordan…. If you want the ball to fall to someone in the last minute, Cristiano is the one.”

Ajax have emerged as potential dark horses once again in this season’s Champions League, maintaining their 100% record with a 3-1 win over 10-man Borussia Dortmund in Germany.

The surprise package of Ajax’s campaign has been Sebastien Haller, the one-time West Ham flop having taken to Champions League football like a duck to water this season.

Haller continued his fine goalscoring record with the decisive second in Ajax’s win at Dortmund, moving to seven goals for the season and extending his record of scoring in each Champions League fixture for the Dutch champions.

4 – Seb Haller is only the fifth player in Champions League history to score in each of his first four appearances in the competition, after Zé Carlos (1993), Alessandro Del Piero (1995), Diego Costa (2014) and Erling Haaland (2019). Fantastic. pic.twitter.com/WBBDywI23r

It came as perhaps little surprise to see the tensions of the Atletico Madrid players threaten to boil over, with the Spanish side finding themselves two goals down within the opening exchanges at Liverpool.

Diego Simeone’s side received three yellow cards and one red inside the opening 45 minutes at Anfield, with central defender Felipe giving his side a mountain to climb following a first-half dismissal.

The centre-back cynically raked his boot down Sadio Mane’s calf to stop a counter-attack, before refusing to approach referee Danny Makkelie as he summoned the defender over for punishment.

Makkelie brandished the red card and whilst it is unclear whether Felipe’s dismissal came for the initial challenge of the defender’s apparent show of disrespect to the official, the Brazilian’s ill-discipline all but ended Atletico’s hopes of a comeback and leaves the Spanish champions with plenty to do in the race for qualification.