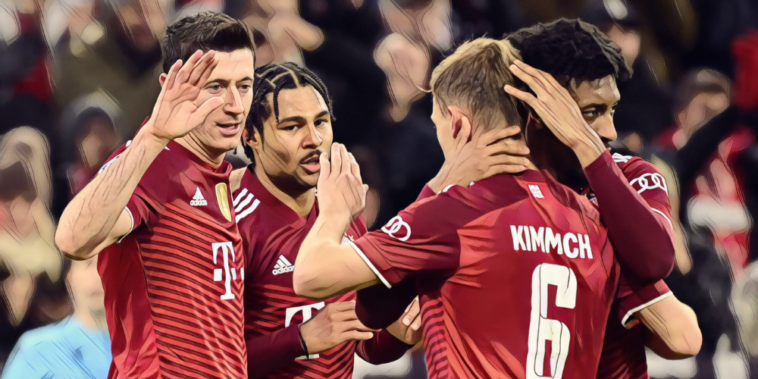 Following the latest round of Champions League action, we pick out some of the heroes and villains from the best and worst of the midweek fixtures.

Bayern Munich, Liverpool, Juventus and Ajax all maintained their perfect records to secure qualification to the knockout stages with two games to spare, whilst both Chelsea and Manchester City moved closer to the last 16 after wins over Malmo and Club Brugge respectively.

Manchester United remain in need of points after securing a last-gasp draw at Atalanta, however, while both AC Milan and RB Leipzig have already crashed to early exits.

Heroes and Villains from the Champions League’s matchday four

Karim Benzema has claimed most of the spotlight at Real Madrid this season following a phenomenal start to the season, the forward scoring twice as the Spanish giants beat Shakhtar Donetsk 2-1 in matchday four.

Benzema’s brace sealed the points, but it was arguably the performance of Vinicius Junior that deserves the greater mention, the winger continuing his scintillating recent form with two assists against the Ukrainian side.

Once maligned for a lack of end product, the 21-year-old has produced nine goals and five assists from just 14 appearances so far this season, emerging as the perfect support act to Benzema’s brilliance.

Electric when in possession and with an improving tendency to make the right pass at the right time, Vinicius is rapidly becoming a special talent and irreplaceable to Carlo Ancelotti’s side.

For the second successive fixture against Liverpool, Atletico Madrid found themselves two goals down before finding their rhythm in the game.

Simeone has brought huge to success to Atletico with his famed demand for defensive discipline, but his pragmatism raises questions over what could be achieved with a little more ambition.

Atletico troubled Liverpool during the first meeting in Spain when operating on the front foot and have the attacking quality to play in a more expansive fashion, their best moments at Anfield coming once again after being forced out of their defensive shape by a deficit.

Liverpool – far from impregnable so far this season – had failed to keep a clean sheet in this season’s group stage, whilst Brighton scored twice at Anfield in the Premier League last weekend.

Simeone’s reluctance to attack from the first whistle made it all too comfortable for Liverpool and the Argentine may just be left wondering whether attack could have been the best form of defence.

Ruben Loftus-Cheek’s renaissance at Chelsea continued with an encouraging performance at Malmo, the midfielder handed his first Champions League start in six years against the Swedish side.

The 25-year-old has seen his career stall in recent campaigns following serious injury and an indifferent loan spell at Fulham last term, but he has been reintroduced to the fold under Thomas Tuchel and provided a reminder of his qualities against Malmo.

Loftus-Cheek – operating in a deeper midfield role as part of a two-man pivot – led Chelsea for big chances created (2), take-ons completed (7) and total shots (4), whilst his 14 duels won was the most on the pitch by a significant margin.

Tuchel spoke post-match over his hope that Loftus-Cheek can finally fulfil his potential, a midfielder with all the attributes but in need of the right combination of guidance, consistency, and luck to cement himself in the Chelsea side.

Semi-finalists two seasons ago, RB Leipzig are out of this season’s Champions League after failing to win any of their four group stage fixtures.

Three successive defeats had left the Bundesliga side with a mountain to climb, but their hopes of a much-needed win against Paris Saint-Germain began brightly following Christopher Nkunku’s early goal.

Awarded a penalty moments after, Andre Silva stepped up despite the presence of regular taker Emil Forsberg on the pitch, with the summer signing hitting a tame effort that was easily saved by Gianluigi Donnarumma.

The miss proved the turning point as PSG roared back with two goals from Georginio Wijnaldum, with a late Leipzig equaliser not enough to save the Germans from an early exit.

No footballer has ever scored more goals than Robert Lewandowski in their first 100 games in the UEFA Champions League.

Not Raul or Karim Benzema. Not even the iconic duo of Cristiano Ronaldo and Lionel Messi.

Lewandowski celebrated becoming the 42nd centurion in the competition’s history with a ruthless hat-trick as Bayern Munich emphasised their status as leading contenders with a 5-2 thumping of Benfica, the prolific Poland international scoring three time to make it eight goals in four UCL games this season.

Lewandowski's goal scoring since turning 30 is something else 🤯 pic.twitter.com/e6ZsmqrUFT

Lewandowski’s numbers are absurd and have been for some time, his 81 goals in 100 games amongst Europe’s elite a frightening rate of productivity and further evidence – if needed – that we are currently witness to one of the greatest goalscorers the game has seen.

It’s now an astonishing 125 goals across all competitions in the last two-and-a-bit seasons alone, a haul achieved in just 103 games since the start of the 2019/20.

Unfortunate to miss out after the Ballon d’Or was cancelled in 2020, the forward would be a fitting recipient of the accolade this time around with no player having arguably been as consistently brilliant across the past three seasons.

Even in the age of VAR, referees are still prone to mistakes.

The Premier League’s Michael Oliver was on the receiving end of some fierce criticism from Borussia Dortmund’s Mats Hummels after his decision to send off the defender this week, during the first half of the German side’s defeat to Ajax.

Hummels’ challenge on Antony failed to make contact with the ball and was undoubtedly mistimed, though the decision to reach for the red from Oliver was harsh to say the least.

No more words for that red card…get the VAR straight!

It wasn’t enough in the end but the boys fought hard for the whole game 👏🏻 pic.twitter.com/ZkrBePOD2R

Hummels, speaking to DAZN after the game, made his feelings apparently clear on the dismissal, one that proved costly for Borussia Dortmund who crashed to a 3-1 defeat and face a fight to qualify for the last 16.

“I have no idea how you can give red as a referee at supposed Champions League level.

“I was in complete disbelief, that’s an absurd wrong decision.

“The referee decided the game today and I think he knows that. I’ll ask him about it again in the dressing room, because I’m very interested in what he saw.

“He (Antony) came to me himself and said it was not a red card. But the video referee, if he does it full-time, has to see that for himself.”

Antony’s night proved much more than just being on the receiving end of Hummels’ red card challenge, however, the winger once again in brilliant form as Ajax maintained their perfect start to the campaign.

The Brazilian was inventive and dangerous down the right flank, with each of Ajax’s three goals coming via fine wing-play from Antony who is rapidly emerging as a top talent in Amsterdam.

Such a special talent. 🇧🇷 pic.twitter.com/4PUW9mFAis

The 21-year-old took his tally to nine goal involvements in 12 appearances across all competitions this season, after setting up goals for Sebastien Haller and Davy Klaassen at the Westfalenstadion.

Antony’s five assists in this season’s group stages are a tournament-leading total alongside Bruno Fernandes and few will fancy facing an Ajax side in confident mood in the next round.

Ole Gunnar Solskjaer may have hoped last weekend’s win at Tottenham was the springboard his Manchester United side needed on the road to improvement, but just days later the familiar flaws in this Red Devils’ team surfaced once again.

United emerged from Atalanta with a point in large thanks to Cristiano Ronaldo’s brilliance and Eric Bailly’s one-man attempt to shore up a shambolic defence, though the evening was littered with poor performances including another disappointing display from Paul Pogba.

The use of Pogba in a midfield two has often left United exposed and it once again proved the case as Atalanta carved out a number of opportunities, the France international proving a more creative presence for the opponents after gifting Duvan Zapata an opportunity.

Eric Bailly’s superb block denied Zapata and spared his teammate’s blushes, with the defender unfortunate to miss out on our Hero nominations following a commanding performance in Italy.

It was a different story for United’s number six who was hauled off after another display in which he failed to stamp authority on proceedings, and it is increasingly hard to see where Pogba fits into Solskjaer’s best XI at present.

Alex Oxlade-Chamberlain’s career has taken a similar recent road to that of the aforementioned Loftus-Cheek, form and fitness issues having seen the midfielder fail to make a significant impact at Liverpool.

The 28-year-old returned to the starting side for Wednesday’s 2-0 win against Atletico Madrid, remarkably Oxlade-Chamberlain’s first Champions League start since the loss to the same opponents in March 2020.

That evening saw Oxlade-Chamberlain star in an ultimately failed attempt to seal the Reds’ progress, and his latest performance was one that will offer Jurgen Klopp hope he can rediscover his best form.

Oxlade-Chamberlain was bright, busy and bustling in the Liverpool midfield, with no teammate registering more tackles (three), interceptions (two), or completing more dribbles (five) with his directness and drive offering the Reds’ engine room a different option ahead of a busy period.