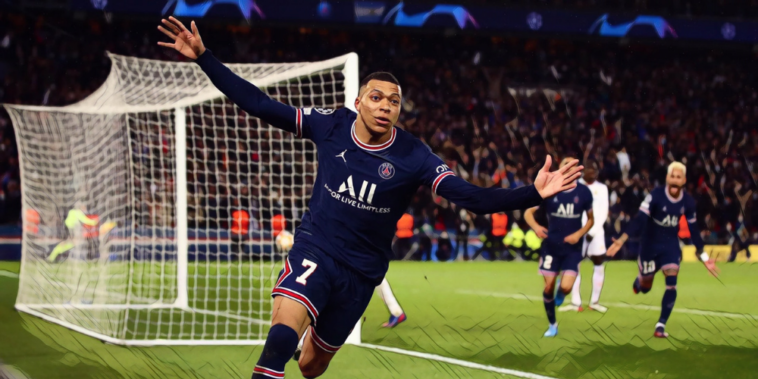 It was impossible to ignore the talk surrounding Kylian Mbappe heading into Paris Saint-Germain’s clash with Real Madrid, a meeting between the forward’s current club and his Spanish suitors.

Mbappe is expected to leave PSG as a free agent at the end of the season and sign for Real Madrid, with his performance at the Parc des Princes a reminder of why he is so coveted.

The 23-year-old was superb as he tormented Real Madrid in a dominant PSG performance, one which came so close to ending in frustration, but for a moment of magic from the jewel in the Parisian’s crown.

Just when it looked like we were set for a 0-0 draw, up pops Kylian Mbappe with a bit of absolute magic 😍

Mbappe’s late, late winner means its advantage PSG ahead of the return at the Bernabeu, as the Ligue 1 side – supremely talented but often lacking cohesion – go in search of an elusive European triumph.

Given the club have Mbappe in their ranks, it appears anything is possible.

Pep Guardiola’s waxed lyrical about the ‘unique’ talents of Bernardo Silva, following a Manchester City win that issued a statement of intent to their Champions League rivals.

Last season’s runners-up destroyed Sporting Lisbon in the Portuguese capital, making a mockery of those who had suggested Rúben Amorim’s side could pose a potential banana skin to their crusade towards a maiden Champions League crown.

City were 4-0 up as the whistle blew for half-time, the first time in history a side has led a knockout round fixture by a four-goal margin at the interval.

It was 5-0 at full-time, with Bernardo Silva having been the architect of a punishing performance from the Premier League champions.

High praise from Pep for this man’s performance last night 👏🏼

Bernardo was the star of the show as Manchester City thrashed Sporting Lisbon 5-0 to move towards the Champions League’s quarter-finals.#SPOMCI #ChampionsLeague #ManCity pic.twitter.com/gwbf2NUq5t

Silva scored two and created another, whilst the midfielder had a hat-trick goal chalked off for a narrow offside as Sporting struggled to live with the industrious invention of the 27-year-old.

“I always tell him ‘you are the perfect player’,” Guardiola gushed post-match. “With the ball, he is more than exceptional, but I always say to him you have to go and win games, you have to have the ability to do it. He has the technique, everything.”

Bernardo Silva earns his second nomination in our Champions League awards, courtesy of his sublime strike in Manchester City’s humbling of Sporting Lisbon.

Pep Guardiola described Silva’s stunner – a wondrous execution of technique as he lashed home a dropping ball on the half-volley – as ‘one of the best goals’ he has seen, a brilliant moment for the former Benfica star on his return to the Portuguese capital.

He's slammed the ball home right on the half-volley! A tricky technique made to look so easy… 🤤

Kylian Mbappe’s individualism and a thumping effort from Raheem Sterling deserve honourable mentions, but Silva’s first of the evening was something special.

Just how crucial could Thibaut Courtois‘ save from Lionel Messi be for Real Madrid?

The Spanish side were second-best throughout on a difficult evening against Paris Saint-Germain, but will head into the return trailing just 1-0 after an inspired showing from Courtois in goal.

The Belgium international made a huge eight saves to frustrate the home side, including two excellent stops to deny Kylian Mbappe in the first half.

Courtois most important intervention came after the break, however, guessing right to push away Messi’s penalty with the game goalless.

The big Belgian comes out on top!

This could be a huge moment in the tie.#UCL pic.twitter.com/8i4GZAZxqK

PSG secured a late win through Mbappe’s goal, but Courtois’ save from Messi means the tie remains in the balance heading to the Bernabeu.

Jurgen Klopp utilised his options to great effect as Liverpool won 2-0 at Inter Milan, the German turning the tide at the San Siro with a brave triple substitution.

Inter had began the second half in fine fashion and were threatening a breakthrough, creating chances against a Liverpool side who found themselves on the ropes.

Klopp turned to his supporting cast and introduced Jordan Henderson, Naby Keita and Luis Diaz, with the former duo regaining control of the midfield and Diaz showing his threat in another encouraging cameo.

Roberto Firmino – another substitute introduced at half-time for the injured Diogo Jota – scored the game’s opening goal to deflate the hosts, before Mohamed Salah’s second soon after made Liverpool firm favourites to progress.

Surprise of the Week

Red Bull Salzburg produced a spirited showing to hold Bayern Munich in the first leg of their tie, the Austrian champions coming agonisingly close to a win in their first ever Champions League knockout round fixture.

Salzburg’s inexperienced side caused problems for a Bayern side enduring an indifferent spell, Kingsley Coman’s last-minute equaliser preventing back-to-back defeats for Julian Nagelmann’s side after the weekend loss to Bochum.

The average age of the Salzburg side was just 23 years and 242 days, the youngest for a Champions League knockout round fixture since Ajax (22 years and 205 days) faced AC Milan during the 2002/03 campaign.

That average had been increased significantly by the presence of 36-year-old left-back Andreas Ulmer, with Salzburg – coached by 33-year-old Matthias Jaissle – showing no fear against the Bundesliga giants from across the border.

Carlo Ancelotti lavished praise on Kylian Mbappe after watching the forward down his Real Madrid side, labelling the French forward as Europe’s finest footballer.

Mbappe continues to be linked with a move to the Spanish capital at the end of the season and Ancelotti will no doubt be delighted to have the 23-year-old among his options should a deal materialise.

Ancelotti hails Mbappe as the best in Europe after his performance against Real Madrid 👀 pic.twitter.com/e9vgxLnTPu

In a huge clash, the forward showed his ability to deliver at a vital time with his stoppage-time winner, a big moment on a big occasion.

Mbappe appears to be getting better and better – a terrifying thought for European defences.

Liverpool became the first team to play successive Champions League away fixtures at the same venue, having faced AC Milan in their final group stage game, before drawing city rivals Inter Milan in the first knockout round.

Jurgen Klopp’s side won on both occasions, with Mohamed Salah netting in each win. The Egyptian became just the second player to have scored against both Milan teams in the same Champions League season, matching the achievement of Peter Crouch from the 2010/11 campaign.

2 – Mohamed Salah is only the second player to score against both AC Milan and Inter Milan in the same Champions League season, after Peter Crouch for Tottenham in 2010-11. Robot.

Sporting qualified for the knockout stages for the first time in over a decade, having recovered from a difficult start to the campaign to thrash Borussia Dortmund and Besiktas to reach this stage.

Having conceded 12 goals in six fixtures – including 5-1 and 4-2 defeats to Ajax – in the group stage, there were strong questions regarding the defence of the Portuguese champions.

City exposed their frailties with Sebastian Coates struggling at the heart of the defence. The centre-back has forged a strong career at Sporting since an underwhelming spell at Liverpool, but he could not deal with the incisiveness and movement of City’s attacking football in a Champions League last-16 mismatch.