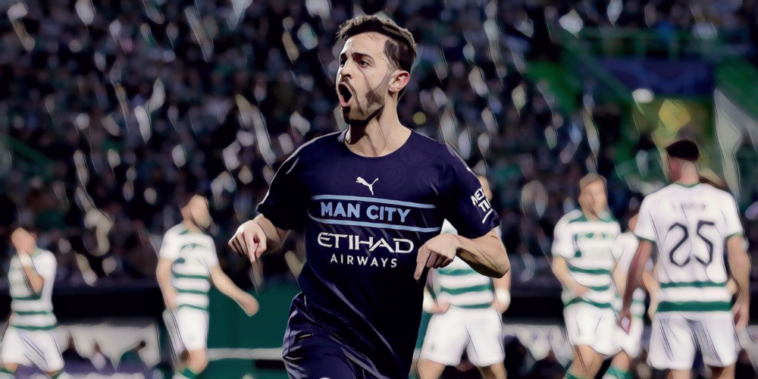 The UEFA Champions League returned this week with the first round of last-16 fixtures, some of the tournament favourites all in action as Manchester City, Liverpool, Bayern Munich and PSG resumed their campaigns.

Manchester City took a huge step towards the quarter-finals after thrashing Sporting Lisbon in the Portuguese capital, whilst Liverpool also secured an impressive away result after grinding out a win at Inter Milan.

Following the opening fixtures of the Round of 16, we’ve compiled the star performers into our Champions League Team of the Week.

Real Madrid were second best throughout their defeat at Paris Saint-Germain, but the performance of Thibaut Courtois ensured the Spanish side remain in the tie.

Courtois made eight saves in total, including two fine stops to deny Kylian Mbappe in the first half. The towering Belgian then saved Lionel Messi’s penalty in what could prove a pivotal moment, diving to his left to keep out the Argentine’s spot-kick.

😬 He's had 28 attempts in that time, including last night's penalty miss. The streak goes on… pic.twitter.com/NsHY59gzb1

Mbappe’s late winner means its advantage PSG ahead of the return, but Courtois’ showing keeps the 13-time winners chances of turning the tie around firmly alive.

Achraf Hakimi produced a fine performance against his former side at the Parc des Princes, with the Moroccan a threat all evening with his marauding runs down the right.

The 23-year-old has developed into one of Europe’s elite full-backs in recent seasons and was defensively strong against the threat of Vinicius Junior, succeeding where several others have failed this season in keeping the Brazilian quiet.

Real Madrid must have been wondering whether they had made a major mistake in sanctioning his sale in 2020, with Dani Carvajal having struggled in his duel with Kylian Mbappe.

Red Bull Salzburg’s youthful side came close to an upset against Bayern Munich, leading the Bundesliga champions until the closing stages of their 1-1 draw in Austria.

Oumar Solet was central to a Salzburg side that frustrated the visitors for much of the contest, with the centre-back outstanding as he dealt with the threat of Robert Lewandowski.

The 22-year-old has grown in stature since leaving Lyon to sign for Salzburg in 2020, the Austrians continuing to demonstrate their talent for unearthing unpolished gems.

Liverpool were not quite at their best but emerged from the San Siro with a valuable 2-0 win, the Reds beating Inter Milan to move a huge step closer to the last eight.

Virgil van Dijk marshalled the side superbly as Liverpool soaked up the host’s pressure, with the Dutchman dominant in his duel with Lautaro Martinez and nullifying the threat of Edin Dzeko with his speed and athleticism.

The 30-year-old was calm and composed in an authoritative defensive display alongside Ibrahima Konate, with the duo extending their unbeaten record as a partnership to nine games since the latter’s summer arrival from RB Leipzig.

Manchester City outlined their status as Champions League favourites with an emphatic first-leg win in Portugal, racing into a four-goal half-time lead during their 5-0 win at Sporting Lisbon.

Joao Cancelo was among a number of the visiting side making their return to the Portuguese capital and the former Benfica defender continued his brilliant season with another showing of defensive diligence and creative output.

Cancelo continually looked to carve out openings for City and was central to his side’s fourth, a wonderful ball over the top releasing Raheem Sterling to tee up Bernardo Silva.

Mohamed Camara produced an exceptional showing in Salzburg’s draw with Bayern Munich, the midfielder a dynamic presence at the centre of his side’s spirited showing.

The 22-year-old won six tackles and completed 6/7 attempted dribbles, with the Mali international a prolific ball-winner with the technical talent to get his side on the front foot.

Salzburg’s side will no doubt have attracted even greater interest after holding Bayern in Austria, with clubs once again set to circle for the club’s brightest talents.

Camara’s class in tight spaces, drive, and ability to regain possession will no doubt have him near the top of recruitment lists for sides looking to overhaul their midfield options.

Pep Guardiola lauded Bernardo Silva as the ‘perfect player’ following Manchester City’s thrashing of Sporting Lisbon, with the midfielder continuing his outstanding season with an unstoppable showing on his return to Portugal.

Bernardo was brilliant from start to finish as the Premier League champions dismantled their Portuguese counterparts, scoring twice – including a stunning strike on the half-volley – and creating another as City ran riot in Lisbon.

He's slammed the ball home right on the half-volley! A tricky technique made to look so easy… 🤤

The 27-year-old’s first goal was something special, before showing the desire to get forward and net a second following Raheem Sterling’s cut-back.

He had the ball in the net for a third time but saw his hat-trick chalked off for a narrow offside, with Sporting unable to cope with the former Benfica midfielder.

Riyad Mahrez’s prolific form continued as the Algerian netted his 17th goal of the season against Sporting Lisbon, the winger having been in fine form around goal for Manchester City this season.

Mahrez was at his mercurial best against Sporting, drifting in-field dangerously with the home side’s defence afraid to get close to the mesmerising feet of the City star.

Riyad Mahrez has now scored 10 goals in his last 11 games in this competition 🔥#UCL pic.twitter.com/YrCv2qUoPt

He has now scored 10 goals in his past 11 games in the Champions League, whilst he has also netted nine goals and provided four assists in his last nine appearances for Pep Guardiola’s side.

A man in form at present.

Kingsley Coman came to Bayern Munich’s rescue with a late equaliser at Salzburg, arriving at the back post to fire home a poacher’s effort and level the tie.

Coman had been Bayern’s leading threat throughout in the contest, injecting positivity into a below-par performance from the Bundesliga champions.

Bayern’s best moments came through the France international, who tormented Rasmus Kristensen with his speed and skill, completing a game-leading seven take-ons.

In a game that saw the Bavarians far from the standard we have come to expect, Coman’s last-minute intervention ensured Bayern remain strong favourites to reach the last eight.

The pre-match talk surrounded the future of Kylian Mbappe, as the forward came up against the side he is expected to sign for on a free transfer this summer.

Mbappe provided a reminder as to why Real Madrid are so keen to secure his signature, producing an electric display in which he tormented the Spaniard’s defence time and time again.

Having been frustrated with a number of efforts, he came to the fore in the closing stages with a brilliant winner to hand PSG a narrow advantage after a dominant first leg performance.

Ancelotti hails Mbappe as the best in Europe after his performance against Real Madrid 👀 pic.twitter.com/e9vgxLnTPu

Mbappe has now been directly involved in 51 goals in his 53 Champions League appearances, the 23-year-old heading rapidly towards a status as the world’s finest footballer.

Karim Adeyemi headed into Salzburg’s clash with Bayern Munich with a point to prove, having spent time in the Bavarian’s youth system before making his name elsewhere.

The 20-year-old demonstrated just why he is so highly coveted with a superb showing, providing the Bayern backline with endless issues in the 1-1 draw between the sides.

"Everybody is going to be talking about him!"

"Against Bayern, world-class players, he stepped up to the stage."

And it's clear to see why. Crazy ability, and he's only 20 🤯#UCL pic.twitter.com/zVKZXOAny8

Adeyemi has scored 18 goals in all competitions this season and whilst he failed to find the net against the Bundesliga champions, his latest performance showed he is ready to make the step up to a top-five league with Borussia Dortmund the front runners for his signing.

Bayern will not want to face Adeyemi on a regular basis domestically, having seen the starlet impress and create Salzburg’s goal with a driving run at the Red Bull Arena.