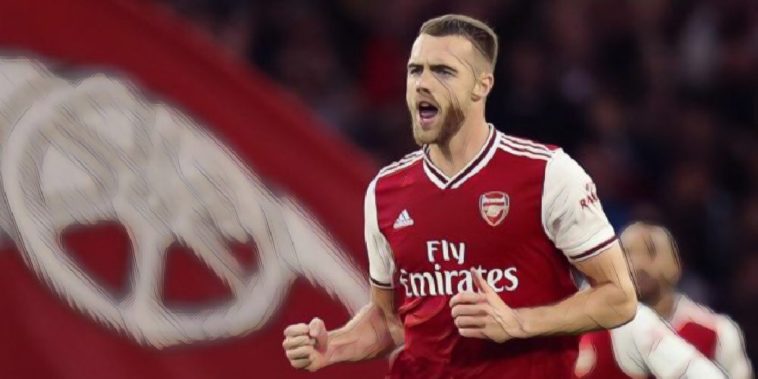 Callum Chambers has admitted that he is looking to feature regularly for Arsenal this season following his 45 minute goalscoring cameo against Aston Villa at the weekend.

Chambers came on as a half-time substitute during the Gunners 3-2 comeback win over the Villains, slotting in at right-back following Ainsley Maitland-Niles’ red card four minutes before the break.

The 24-year-old would be the unlikely goalscorer of Arsenal‘s second equaliser of the game in the 81st minute before Unai Emery’s side collected all three points courtesy of Pierre-Emerick Aubameyang’s stunning free-kick, and having spent the last few seasons on loan at Middlesbrough and Fulham, Chambers said he is now aiming to play ‘week in, week out’.

Calum Chambers doesnt score many goals, but what a big one this one was! 🔴pic.twitter.com/vNihPlc464

“I’m back now too and I feel good. We had a good summer, pre-season’s gone well and I’ve settled back in nicely with the lads, the new manager and coaches,” Chambers told arsenalfc.com.

“To establish myself here, I need to play week in, week out and that’s been the same at every club I’ve been to. When you’re playing every week, that’s when you’ve got that confidence and you can prove yourself to the fans. That’s a goal I want to push for, it’s one of my aims.

“I’ve got to figure out how to do that by working on things off the pitch to help me achieve that. I want to be starting at Arsenal. That’s the aim for this season. ”

See also – Premier League Team of the Week for Gameweek 6