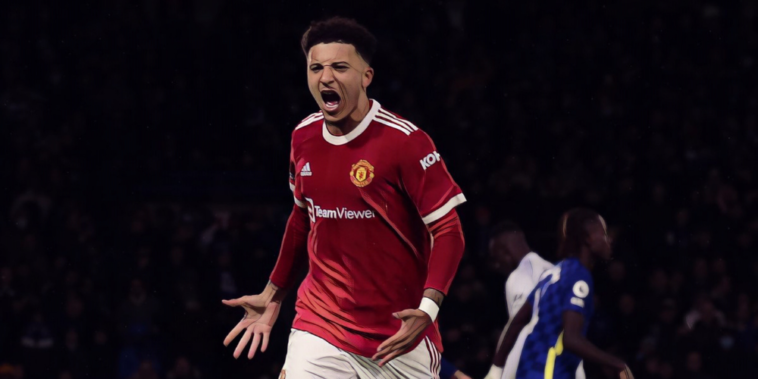 Edinson Cavani has backed Jadon Sancho for success at Manchester United after the winger scored his first goals for the club.

Sancho has endured a difficult period since his highly-anticipated £72.9m move from Borussia Dortmund last summer, but has scored in each of his past two fixtures with crucial goals against Villarreal and Chelsea.

Cavani has opened up on a testing spell for his young teammate, but is confident that Sancho can find a consistent run of form with the Red Devils and has backed the 21-year-old to ‘do even greater things’ at Old Trafford.

“I reckon that one of the things that scoring goals can give you, a lot of the time, is the sense of assurance and peace of mind to keep on working and training hard,” Cavani told the Manchester United website.

“I think, a lot of the time in football, you have to have an extra inner strength about you, which is to be able to keep going when on many occasions we don’t get on the scoresheet.

“And being able to always keep your spirits up and maintain that same dedication and hard work, while keeping your fitness levels high.

“We are all really happy for him scoring his first goal. I think it’s been quite a tough period for him, but football is like that. When you get to a certain level of the game, I think that people are always full of expectation and there’s always a lot of chat and questions being asked about players.

“I think he just needs to keep demonstrating everything he has shown us up to now and keep working calmly and with a clear head; because often, the only thing that can make you enjoy success and able to keep your standards high and the rest of it, is the peace of mind that hard work gives you.

“And the perseverance and discipline to be up there. That’s the only way to keep a cool head when perhaps things aren’t quite going for you. So, here’s hoping he can do even greater things for the club, and I personally wish him every success and hope he can go on to achieve lots more in his career and for Manchester United.”