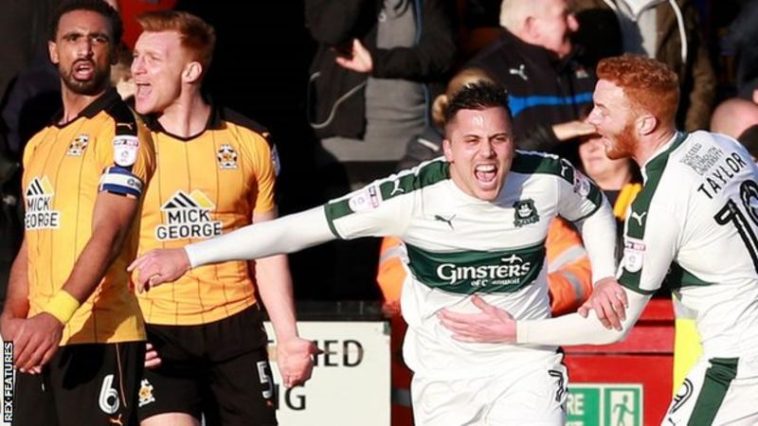 Plymouth Argyle overcame some serious Cambridge United pressure on Saturday, proving their promotion credentials just a week before they host Devon neighbours, Exeter, in what’s shaping up to be a cracking automatic promotion shoot out!

Argyle boss Derek Adams started four of their January signings in this game, including deadline day newbie Matthew Kennedy on loan from Cardiff.

Cambridge, who had lost their previous two league games, were the team that started brighter as Ben Williamson had a header deflected wide and Liam O’Neil chose not to respect the equipment as his fearsome shot struck the bar. Eventually Argyle were carving out chances though. The front four of Taylor, Kennedy, Sarcevic and Carey were combining magically and U’s keeper Will Norris had to be at his best to deny Argyle a goal.

Four minutes before half time, Plymouth’s breakthrough came. Carey held the ball up well on the right-hand side and managed to whip in a perfect cross which was met by the head of Antoni Sarcevic on his first start for the Pilgrims. Norris stood no chance in the Cambridge goal as the header was cultured and well placed into the very top corner.

Penalty appeals filled the Cambs Glass Stadium right on the stroke of half time as Scott Wharton’s header was cleared off the line, with what looked like, to Cambridge fans, a hand. However, the ref was swift in waving away protests and Argyle went into the break a goal to the good.

Luke McCormick the Argyle keeper was called upon regularly in the second half as Cambridge came knocking on the door. Just two minutes into the final period, Jake Carroll had a right footed shoot blocked, that turned out to be his last real contribution as ten minutes later he was substituted as Cambridge made their first change. Argyle also opted to switch things up as Donaldson came on for Kennedy who had shown positive signs during his debut.

Argyle looked to have a reasonable amount of control until the 70th minute came and the U’s really turned it on. Two more changes and they began bombing forward. Scott Wharton, Gerry McDonagh and Paul Lewis all had numerous chances denied by a firm Argyle defence.

After seven minutes of added time, Plymouth Argyle’s mission was complete. They’d overcome a dangerous Cambridge side who refused to lie down. Resolute defending and tricky attacking play was key for Argyle as they proved they really deserve to be promotion favourites.