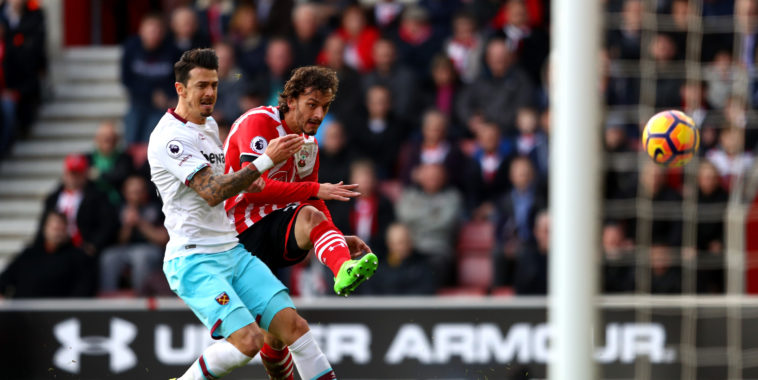 West Ham United beat Southampton 3-1 at St Mary’s on Saturday to record a rare win on the south coast. Here are five things we learned from the encounter.

West Ham have the ability to bounce back from a heavy defeat and win impressively away from home. After losing 4-0 at the London Stadium to Manchester City the previous Wednesday, the Hammers could have easily succumbed to another defeat. Instead they won, which is something they were not able to do earlier in the season.

Results have generally improved since December and the team look far more galvanized and together since Dimitri Payet left. The victory over Southampton was West Ham’s second successive 3-1 away win; a very creditable statistic taking into account the City result.

2. Andy Carroll is a leading marksman

Andy Carroll scores decisive goals. His importance to the club can not be underestimated. At Southampton he once again led from the front, scoring the Hammers equalising goal and coming close with a header a few minutes earlier.

If West Ham are to maintain or improve on their present ninth position in the Premier League, Carroll has to remain fit and raring to go.

3. Hoodoos can be broken

Trips to Southampton have not been the most fruitful for West Ham. Going into the game, the Hammers had never won at St Mary’s before. The last away win over the Saints was at the old ground, The Dell, in November 2000 when a 3-2 win was secured with goals from Freddie Kanoute, Stuart Pearce and Trevor Sinclair.

Since then a string of narrow defeats and draws has meant the Hammers haven’t enjoyed their visits to this part of the south coast, until yesterday that is.

4. What next for West Ham

For the remainder of February West Ham have two winnable games. Firstly at home to West Bromwich Albion and then away to Watford before entertaining Chelsea at the beginning of March. Having lost 4-2 to both WBA and Watford in September, reversing these results is now a distinct possibility, bearing in mind that Southampton’s 3-0 victory at the London Stadium was avenged on Saturday.

5. Southampton are heading in wrong direction

After a promising start to the season these are now nervous times for the Saints. They are now only seven points above the relegation zone having lost six of their last seven games.

The team struggled defensively against West Ham and desperately missed injured central defender Virgil Van Dijk. To rub salt into their wounds, their former captain Jose Fonte, who joined West Ham in January for £8M, had a good game and looked confident and assured on his first return visit to St Mary’s.