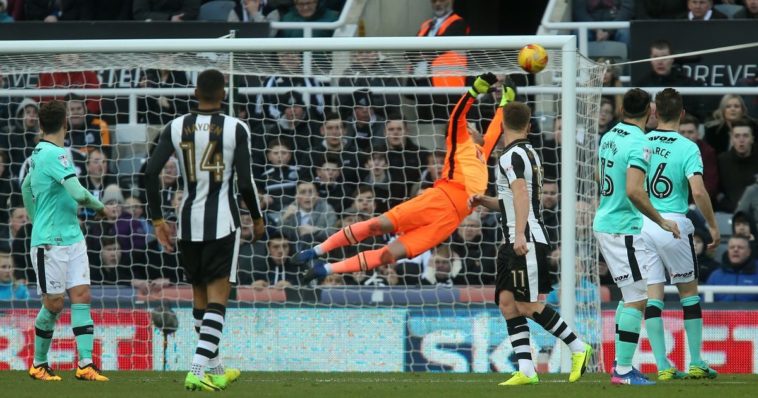 Newcastle leapfrogged Brighton at the top of the table with a win over Derby County, against their former manager Steve McClaren.

The home team were desperate to bounce back with a win against Steve McClaren’s Derby. They had been left distraught in midweek as a late Ciaran Clark own goal surrendered two points against QPR. The Rams came into this game on the back of two consecutive league wins over Ipswich Town and Reading. A win here for the away side would most definitely help them in their battle for promotion to the Premier League.

Rafael Benitez, well known for his rotation of the starting eleven, made three changes. In came Aleksandar Mitrovic for Daryl Murphy, Mo Diame for Ayoze Perez and Grant Hanley in place of his captain Jamaal Lascelles.

As for Derby there was only one change made to the team that won 3-0 away win against Ipswich Town; Johnny Russell came in for Abdoul Camara who dropped to the bench. Tom Ince started against the club that were heavily linked with him regarding a transfer in January.

It was the team in the black and white who started the brightest. The first opportunity came in the opening minutes when Mo Diame intercepted Bradley Johnson’s attempted forward pass. The Senegalese then advanced into the box with the ball glued to his feet before striking a shot on goal but the midfielder saw his effort go straight into Scott Carson’s chest.

Isaac Hayden was then presented with a chance. Mitrovic controlled a pass into his feet by Diame, the Serb then passed the ball out to the left to Hayden however his shot was a very tame effort and did not trouble the keep at all.

There was a scare for The Magpies shortly after as Matt Ritchie played a pass across his own penalty area where Darren Bent was lurking. The striker had a glorious chance to open up the scoring, luckily for Newcastle Ciaran Clark put himself in front of the ball preventing a shot from Bent.

And then, the breakthrough. Aleksandar Mitrovic cleverly took the ball out of the air with his chest. He played a one-two with Diame before laying the ball off to Matt Ritchie. He hit a hard shot which took a big deflection off Bradley Johnson. The deflection caused the ball to loop over Scott Carson and drop into the Derby net. Ritchie netting another goal continuing his great goalscoring form.

The goal was a huge lift to the Magpies who then created another tremendous chance to double their lead. Isaac Hayden crossed the ball to Mo Diame from the by-line. Diame hit a venomous volley which was denied by a spectacular save from the former England goalkeeper.

In the second half, Mitrovic was gifted an opportunity to break his scoring duck. All he need to do was direct his effort on goal but the Serbian somehow dragged it wide. It was easier to score than miss.

Following this, Derby had their best opening of the game. Substitute Abdoul Camara put in an inviting cross to the back post to the awaiting Tom Ince. The young winger had practically an open goal to aim at yet he put the ball horribly wide. An easier chance to score than Mitrovic’s at the other end.

It was proving to be an end to end second half when Jonjo Shelvey played a magnificent long ball over the top of the defence to Ayoze Perez. He lobbed the ball over Scott Carson who was racing off his line simultaneously; however Marcus Olsson was there to clear the ball off the line. After Perez’ effort on goal there was a collision between himself and the keeper. In all honesty it should have seen a free kick awarded to Newcastle and a red card for Carson.

In the final minute of the match, Derby were awarded a corner, prompting Scott Carson to sprint the length of the field to make himself an option. Penalty appeals were made by the away team; they felt Jamaal Lascelles pulled Carson to the floor. Video evidence shows that the goalkeeper fell down extremely easily.

It was a tense end to the game for Rafa Benitez but this time, his side were able to come home with the victory. The Geordies were back at the top with Brighton having one game in hand. The toon army were hopeful that their promotion rivals would suffer defeat to Brentford.