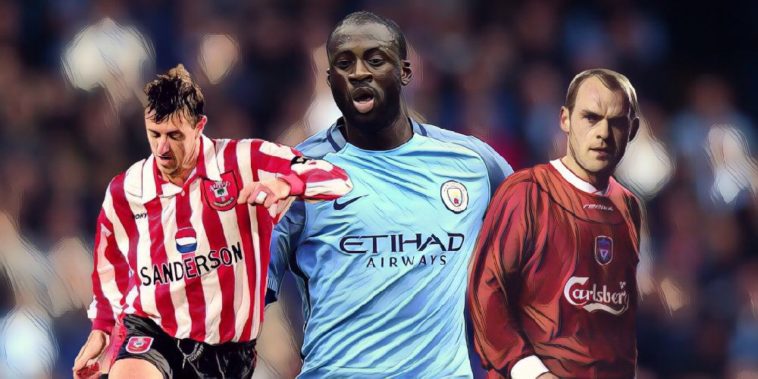 Manchester United’s penalty woes this season, have been something relished by fans of the other 19 Premier League clubs.

In fact, United have missed four top-flight penalties so far this campaign, which is more than all the other Premier League clubs combined. Although to give him his due Marcus Rashford has looked pretty reliable from the spot in recent weeks.

It takes a certain type of player to step up for penalty duty, with composure and technique both essential attributes. That said, throughout Premier League history we’ve seen some specialist spot-kick stars, and here are the very best…

The West Ham favourite possessed a good scoring record during two spells at the club, courtesy of his rocket left foot which placed him high on the priority list for set-piece duties.

Dicks’ style was a far cry from some of today’s skips and shuffles, the former full-back often taking the no-nonsense approach of striking the ball with maximum power.

The tactic worked, the Hammer’s hard man missing just one of his 16 penalties.

You can stick your Panenka penalties right up your arse. Put your foot through it, son.pic.twitter.com/8h6yaRThe3

The former Southampton and Everton forward was a regular goalscorer throughout his Premier League career, particularly during his spell at St Mary’s, whilst his reliability extended to duties from the penalty spot.

Often trusted with penalty duties at Liverpool ahead of the likes of Michael Owen and a young Steven Gerrard, former England midfielder Murphy was a nerveless spot-kick taker.

Murphy continued to take responsibility for penalties during a five-year spell at Fulham, his conversion record standing at 94.7% after scoring 18 out of 19 penalties during his Premier League career.

A man renowned for his ability from set-pieces, the Southampton legend missed just one penalty during his illustrious career on the South Coast.

Considered amongst the best penalty takers of all-time, Le Tissier scored 47 of 48 penalties throughout his career, with his record in the Premier League standing at 25 scored from 26 efforts.

His one miss came in the very first season of the Premier League, Nottingham Forest goalkeeper Mark Crossley becoming the only man to save a Le Tissier spot-kick.

Statistically, the best penalty taker in Premier League history, Manchester City icon Yaya Toure had a flawless record from the spot during his glittering career at the Etihad.

The Ivory Coast international was instrumental in City’s emergence as a powerhouse of English football, scoring several vital goals including a series of penalty kicks.

The former Barcelona star scored 11/11 penalty kicks for City, meaning he is the only player in Premier League history to have taken at least 10 penalties and possess a 100% record.