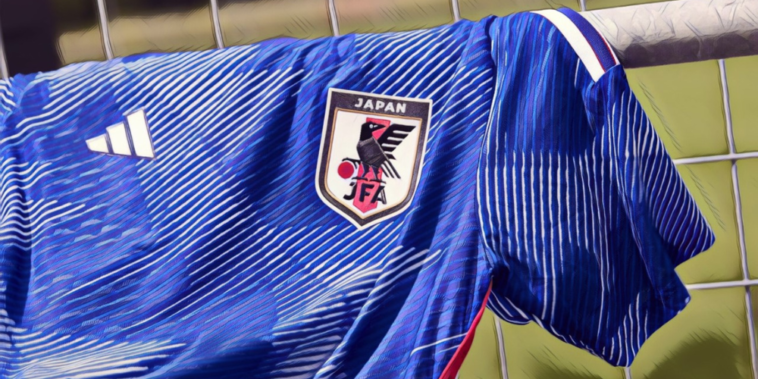 Excitement is building ahead of the FIFA World Cup with all eyes set to turn to Qatar.

There’s nothing that gets the juices flowing quite like a major international tournament and ahead of a feast of football we’ve decided to look through some of the best new threads on offer in Qatar.

From quirky designs to statement shirts of protest, here are five of the best kits that will feature at the World Cup this winter.

Nike have somewhat salvaged an uninspiring home kit with this clean away design for England, a shirt which incorporates the traditional red (the away shirt, in our eyes, should always be red), with a large Three Lions crest and 90’s style collar.

The vibrant red number is a huge improvement on the home shirt that England will adorn, one with a strange blue graphic on the shoulders. According to Nike, it is ‘a distorted Three Lions graphic, layered with aggressive angles and lines to replicate claw marks’. Sorry Nike, but it’s a bit s***.

The red number for on the road is resemblant of England’s away kit at the turn of the millennium, one which was worn at Euro 2000 as Kevin Keegan’s side – but for an Alan Shearer winner against Germany – disappointed in spectacular style.

The new away shirt 😍

Our next #ThreeLions kit competition gives you the chance to win one:

France will travel to Qatar as world champions as Les Bleus look to become the first team since Brazil in 1962 to defend the trophy.

Kylian Mbappe and co will do so in style, thanks to this design from Nike. There’s a sense of elegance that comes with the blue that the French adorn, while the sharp gold trimmings are befitting of the World Cup holders. Throw in the tricolour flag on the sleeve and there’s subtle class to this kit.

The henley collar earns France a slight mark down, but there’s more than enough to like here. France will head to the World Cup as one of the best dressed sides and with one of the finest squads on show.

Hummel have chosen to make a statement with their designs for Denmark’s World Cup campaign, opting for toned down shirts in protest against the host nation.

The Danish manufacturer released a statement saying the brand ‘don’t wish to be visible during a
tournament that has cost thousands of people their lives’, with each of the red, white and black designs featuring a monochrome look.

🚨 OFFICIAL! Hummel presents Denmark's shirts for the World Cup, which are a protest against Qatar. 🇩🇰👏🇶🇦

🎙️ “We've toned down all the details of the shirts because we don't want to be visible in a tournament that has claimed thousands of lives.”

Each are smart, but there’s just something about black on black that looks superb. The third kit is a winner.

In contrast to Denmark’s subtlety, South Korea have gone bold with their away design for the World Cup.

Nike have gone for a dark template with splatters of colours across the jersey. According to the designers, the kit highlights Taegeuk, the symbol found on the Korean flag that represents national pride and balance between heaven (blue) and earth (red).

What do we think? 🤔 pic.twitter.com/dUMJs1st8x

After Nigeria – the benchmark for World Cup kits that catch the eye in recent editions of the tournament – failed to reach Qatar, South Korea have taken over the mantle for shirts that stand out from the crowd.

This would be a true festival favourite, if the World Cup wasn’t taking place in the winter…

Another which is categorised into the bolder shirts section, Japan rarely disappoint when it comes to World Cup kits.

The latest offering incorporates a design that takes inspiration from an origami crow, a good luck symbol in Japan. The textured badges, new Adidas logo and classic three-stripe sleeves give this a brilliant aesthetic, in the traditional blue colours of the Japanese.

The likes of Takehiro Tomiyasu and Takumi Minamino will lead Japan’s campaign in Qatar, as Hajime Moriyasu’s side look to upset the odds and escape a tough group containing Germany, Spain and Costa Rica.