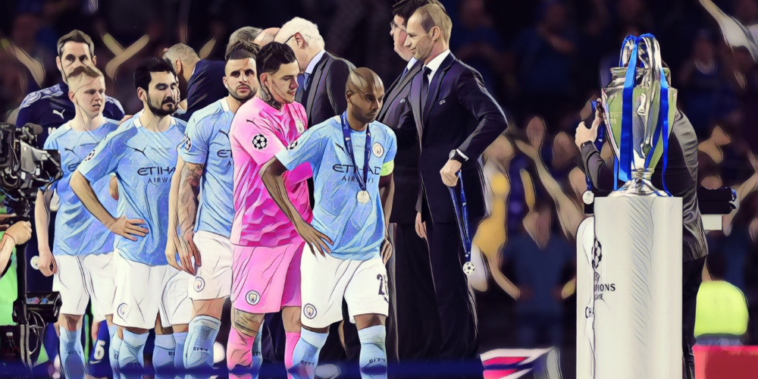 The UEFA Champions League remains the toughest and most demanding competition in club football, a tournament in which the very best teams in Europe compete to be crowned as the continent’s finest.

Becoming European champions is no easy feat and throughout the years we’ve seen a succession of top teams fall short in their quest to win the trophy, Manchester City the latest side to suffer heartbreak following their final defeat to Premier League rivals Chelsea.

Pep Guardiola’s side have dominated English football in recent years to be crowned champions three times in the past four seasons, but have struggled for success in Europe with a maiden Champions League crown proving elusive.

Following City’s defeat in this season’s final, we look back at five of the best teams not to win the Champions League.

Juventus are one of the most respected clubs in European football and Italy’s most successful side, though the Bianconeri have often struggled to turn domestic dominance into success on the continent.

The Turin side have been crowned champions of Europe on two occasions throughout their history, winning a maiden European Cup in 1985, before winning the Champions League in 1996 by beating holders Ajax on penalties.

Over the following seasons Juventus came agonisingly close to adding to their trophy haul however, reaching two further finals and suffering a semi-final collapse during the late nineties.

Juventus have not achieved further success in the 25 years since that mid-nineties triumph, despite ending that decade as one of the best in Europe after Marcello Lippi invested to keep the Italians at the summit.

Zinedine Zidane arrived from Bordeaux in the aftermath of that Champions League success, alongside stellar names including Christian Vieri, Alen Boksic and Pablo Montero, each joining an already formidable side featuring an emerging Alessandro del Piero and Didier Deschamps.

Juventus were crowned Serie A champions in both 1997 and 1998, though lost the Champions League final in each of those seasons –  Borussia Dortmund and Real Madrid – as part of a run of three consecutive final appearances.

The 1998/99 campaign also saw the Old Lady surrender a semi-final lead to exit the competition, leading 2-0 on the night and 3-1 on aggregate in the second leg of their clash against Manchester United, before crashing to a 3-2 defeat to bow out in the last four.

That proved largely the end of that side as a force in Europe, though Juventus have since reached a further three finals (2003, 2015 and 2017) without lifting the trophy.

Valencia enjoyed a fine period in their history during the early 2000s, winning trophies both at home and abroad under the guidance of Hector Cuper and later Rafael Benitez.

The former guided the Spanish side to back-to-back European finals following the turn of the century, the first coming in Valencia’s first ever appearance in the Champions League since its rebranding.

A talented spine featuring Santiago Canizares, Mauricio Pellegrino and the brilliant Gaizka Mendieta made it all the way through to the showpiece in 1999/2000, eliminating compatriots Barcelona 5-3 on aggregate in the semi-finals, before another all-Spanish meeting with Real Madrid.

It was the first-ever same nation final and one that saw Valencia crash to a disappointing 3-0 defeat, though Cuper’s side responded the following season despite selling a host of leading names to reach a second successive final.

Imports including John Carew, Pablo Aimar and Didier Deschamps helped Valencia eliminate Arsenal and Leeds to reach a showpiece showdown with Bayern Munich, where a tense final was decided via a penalty shoot-out.

Bayern emerged victorious to exorcise their final demons of two years earlier, and despite winning two La Liga titles in three seasons under Benitez between 2002 and 2004, Valencia have since failed to make a genuine impact on the Champions League.

Chelsea’s success in this season’s competition saw the west London side crowned European champions for a second time, their first also coming in surprise fashion as Roberto Di Matteo led an unfancied side to the trophy.

Roman Abramovich waited almost a decade to see his investment returned with Champions League glory, despite Chelsea emerging as one of the continent’s best teams during the mid-2000s.

Jose Mourinho’s arrival as manager accelerated the Blues’ rise to the summit of the game, the Portuguese coach appointed after guiding rank underdogs Porto to Europe’s biggest prize in a stunning triumph.

Backed by Abramovich’s billions, Mourinho assembled a side that dominated English football over the next two seasons, signing names including Ricardo Carvalho, Didier Drogba, Petr Cech and Arjen Robben during his first summer in charge.

Chelsea won a first league title in 50 years during the 2004/05 season with a record low of just 15 goals conceded, before retaining the Premier League the following season in comfortable fashion.

Chelsea possessed arguably the strongest spine in world football with their expensive imports adding to a core already including John Terry, Claude Makelele and Frank Lampard, though fell short in their quest to conquer Europe to familiar opponents.

Having eliminated both Bayern Munich and Barcelona during Mourinho’s first season, it was Liverpool – a side who finished 37 points adrift of the champions domestically – who ended their run after frustrating the Blues over two fiercely contested semi-final clashes.

It proved the start of an intense rivalry as Liverpool again bettered a superior Chelsea side in the last four two years later, the west Londoners wait for European success finally ending five years after Mourinho’s departure.

Another side whose defensive strength led to success both domestically and further afield, Diego Simeone’s Atletico Madrid side of the mid-2010s proved nightmare opposition for Europe’s finest.

Simeone steadied a side in disarray before building a fighting spirit that would define their game, with Atletico securing La Liga title success during the 2013/14 season to end a nine-year duopoly from Barcelona and Real Madrid.

Diego Godin’s goal looked to have crowned Atletico champions with Simeone’s side leading until the final seconds, only for Sergio Ramos’ dramatic equaliser to force extra-time.

Atletico were shell-shocked and overpowered in the added period as Real sealed La Decima, and it was their cross-capital rivals that crushed their dreams once again two years later after triumphing on penalties in Milan.

Manchester City have become English football’s most successful side over the past decade, winning five league titles and a wealth of domestic competitions to become the Premier League’s benchmark.

City’s success has been elevated to a new level since the appointment of Pep Guardiola as manager, the Spaniard winning three of those Premier League titles and overseeing the transformation of the side.

The club’s 2017/18 title came following a record-breaking 100 points, with City’s incredible consistency seeing their crown retained the following campaign with 98 points – as part of an unprecedented domestic treble – despite fierce competition from Liverpool.

Guardiola has failed to transfer that form onto the Champions League stage however, exiting the competition at the quarter-finals or earlier in ties the club started in as favourites, losing to Monaco, Liverpool, Tottenham and Lyon.

City’s fortune appeared to have changed this season as they reached the latter stages for the first time, beating Borussia Dortmund and PSG on their way to a first-ever final, in pursuit of a historic treble.

Guardiola’s side suffered defeat to Chelsea in a disappointing final performance however, their wait for a first Champions League crown extended into a further season at least.

you missed the arsenal invincible squad.