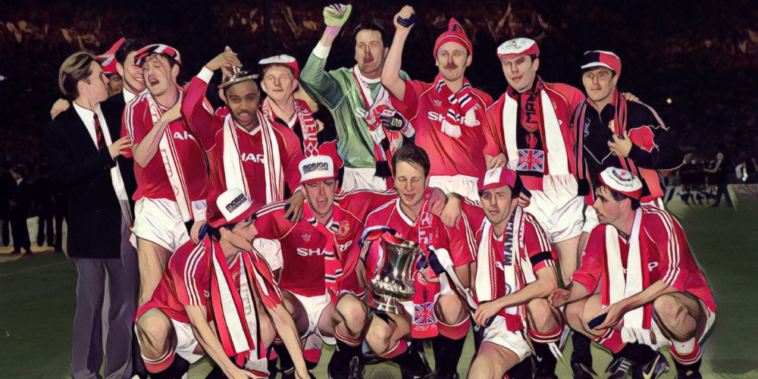 Sir Alex Ferguson is the most successful manager in British football history and an iconic figure in both Manchester United’s history and the world game.

Ferguson inspired the most successful period in the Red Devils’ history during a glittering 26-year reign at Old Trafford, one which saw the club dominate the first two decades of the Premier League to win 13 league titles, five FA Cups and two Champions League trophies under the Scot’s guidance.

It could have all proven so different for Ferguson however, who found himself under pressure during the early part of his tenure, an FA Cup final with Crystal Palace proving a sliding doors moment for English football.

Ferguson had failed to win a trophy in any of his first four seasons in charge and heading into the 1990 FA Cup final his job was on the line, the Red Devils having regressed from 2nd two years earlier to finish the league season a disastrous 13th.

Lee Martin’s winning goal in the replay – following a thrilling 3-3 draw in the first meeting – secured silverware for United and saved Ferguson’s job, lighting the touchpaper for what proved a dynasty of success.

Here is the Manchester United XI from their 1990 FA Cup final win over Crystal Palace.

Les Sealey was a surprise inclusion in the Manchester United side as Sir Alex Ferguson dropped established first-choice Jim Leighton, following an indifferent period of form for the former record signing who made just one further appearance for the club after his omission.

Sealey had signed on loan for the Red Devils from Luton in December and had made just two league appearances before the final, but was thrust into action for the replay and kept a clean sheet as Ferguson’s side won the FA Cup.

The goalkeeper earned a permanent deal following the success and was first-choice as United won the European Cup Winners’ Cup the following season, though moved on to Aston Villa in 1991.

Sealey – who became a cult hero for his courageous displays – tragically died of a heart attack in 2001 aged just 43.

Mike Phelan came through the ranks at Burnley before starring at Norwich, his performances earning the versatile midfielder a £750,000 move to Old Trafford ahead of the 1989/90 season.

Phelan spent the majority of his debut campaign at right-back before the arrival of Denis Irwin from Oldham and started the final in a defensive role, winning the first of four major honours he claimed with the club.

Following his retirement Phelan moved into coaching and has spent much of the past two decades on the backroom staff at United, the 58-year-old currently assistant manager to Ole Gunnar Solskjaer.

Steve Bruce’s signing from Norwich proved a brilliant purchase for Ferguson early into his reign, signing the centre-back in a £875,000 deal with Bruce becoming a bedrock of the Red Devils’ early successes of the era.

Bruce formed a brilliant partnership with Gary Pallister with the two affectionately dubbed ‘Dolly and Daisy’, the uncompromising style of the former perfectly complimenting the speed and elegance of the latter.

Bruce spent nine seasons with the Red Devils and made 414 appearances in all competitions, starring during the club’s title successes in 1993, 1994 and 1996.

The defender remarkably finished as the club’s leading scorer in the season following their FA Cup triumph, netting 19 in all competitions aided by a responsibility as United’s penalty taker.

The perfect partner for the aforementioned Bruce, Pallister arrived in a £2.3m record deal from Middlesbrough ahead of the 1989/90 season, the highest fee ever paid between two English clubs.

Pallister had been called into the England set-up whilst still a second tier player and immediately handled the step-up a division, establishing himself as one of the best defenders in English football over nine seasons at Old Trafford.

Pallister was named as the club’s Player of the Season during that debut campaign and won the PFA Player of the Year two years later, helping United to FA Cup and Cup Winners’ Cup successes before winning four of the first five Premier League titles.

A product of the Manchester United academy, Lee Martin’s timely final winner was one of just two goals he scored across his career with the club, controlling Neil Webb’s pass before lashing home a high finish.

The 1989/90 season proved the most productive of the left-back’s time with the Red Devils, though he struggled for minutes the following season amid competition from Clayton Blackmore. Martin made 73 appearances for the club before joining Celtic in 1994.

The technically talented Webb was another signing ahead of the 1989/90 season as Ferguson bolstered his options, with the creative star providing the FA Cup final winning assist with an exquisite pass into Lee Martin.

Webb had recently returned from a serious Achilles injury that disrupted a bright start to his career with the Red Devils, his passing helped decide the replayed final win over Palace before inclusion in England’s World Cup squad that summer.

The midfielder struggled to recapture his finest form following his injury lay-off however, though remained with United until returning to Nottingham Forest in 1992.

Robson proved an inspirational figure for both club and country to earn the moniker ‘Captain Marvel’, the midfielder the heartbeat of the United side throughout the eighties and early nineties.

Robson was blessed with endless energy, ferocious courage and an ability to ghost forward and score goals, a complete midfield talent who helped United win the FA Cup in a bruising battle at Wembley.

The former England international had formed part of the Red Devils’ sides that won the FA Cup in 1983 and 1985, collecting a third winners’ medal after Palace were edged in the final replay.

He made 461 appearances for the club and scored 91 goals, winning Premier League titles in each of his final two seasons.

Partnering Robson in midfield was Paul Ince, the youngster having been signed from West Ham ahead of the campaign in a deal that saw the east Londoners support rage about his exit.

Ince was a box-to-box talent who was strong in the challenge, quick and capable of influencing games across the pitch, developing into an integral member of Ferguson’s first great sides.

Ince won two league titles and two FA Cups amongst 10 trophies won across six seasons at Old Trafford, whilst he was named in the PFA Team of the Year for three consecutive campaigns during the early nineties.

Wallace signed for United in 1989 as Ferguson looked for attacking threat on the flanks, the Southampton winger having won plaudits for his explosive and exciting style.

He made 317 first-team appearances for the Saints before making the move, though he struggled to recapture his former performances and fell out of favour following the 1989/90 season amid competition from Lee Sharpe and later Ryan Giggs.

Brian McClair became an instant fans’ favourite after becoming the first player since George Best to score 20 league goals in a season for United during his debut campaign, the forward proving a hugely popular figure on the terraces.

McClair proved influential in the Red Devils’ 1990 FA Cup success, scoring against Newcastle, Sheffield United and Oldham on the club’s way to the final against Palace.

The former Scotland international won five trophies between 1990 and 1992 as the Ferguson era got up and running in the early nineties, before playing a key role in the side’s early successes of the Premier League – winning four league titles.

Mark Hughes returned for a second spell at Manchester United in 1988, having spent two seasons at continental giants in Barcelona and Bayern Munich.

Hughes was named as PFA Player of the Year in 1989 and 1991 as he starred for Ferguson’s emerging side, scoring 15 goals in all competitions during their 1989/90 FA Cup-winning campaign.

The Wales international had scored twice in the 3-3 draw with Crystal Palace in the first meeting, part of a haul of 163 goals he scored for the Red Devils across two separate spells.

He scored twice in the 1991 Cup Winners’ Cup final and completed a domestic set of trophies with United, after winning the club’s first League Cup in 1992 and a Premier League winners’ medal the following season.