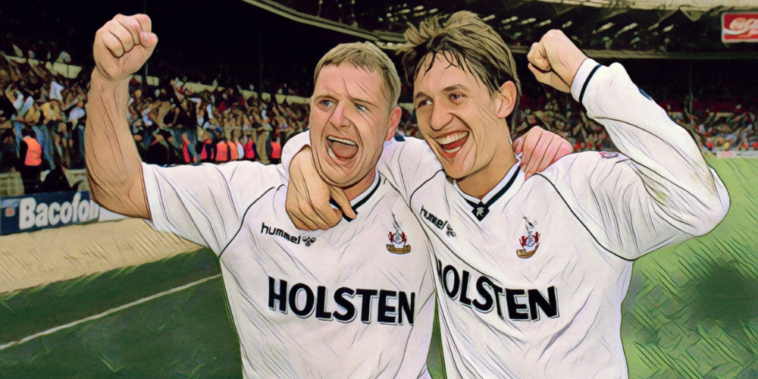 Everton face Tottenham in a huge Friday night clash at Goodison Park this evening, a high-stakes encounter as both sides seek to secure European qualification.

Just a single point separates the two teams ahead of the clash on Merseyside, with both amongst a congested collection of teams chasing a top-four finish and place in next season’s Champions League.

Ahead of what promises to be an important clash, we look at five of the best players to have played for both Everton and Tottenham.

One of the great goalscorers in English football history, Gary Lineker remains the only man to have finished as the top-flight’s leading scorer with three different clubs.

Lineker rose to prominence at hometown side Leicester where he racked up over a century of goals after coming through the ranks, a Golden Boot-winning campaign in 1984/85 earning him a move to reigning champions Everton.

Everton had just secured the league title and UEFA Cup Winners’ Cup before bolstering their ranks with the signing of the England international, though despite a prolific season from Lineker ended the season trophy-less following a series of near misses.

Lineker, however, retained the Golden Boot and was named as the PFA Player of the Year and FWA Footballer of the Year after a campaign that saw him score a staggering 40 goals in all competitions, the most by an Everton player since the legendary Dixie Dean scored his record-breaking 67 in 1927/28.

He left after just a single season, however, joining Barcelona in a £2.8m deal after finishing as the leading scorer at the 1986 World Cup, returning to England three years later at Tottenham.

Lineker scored 80 goals in 138 appearances for the north London side over three seasons, winning a third Golden Boot in his debut campaign and the FA Cup during his second – his one and only major honour in English football.

He was named as the FWA Footballer of the Year for a second time in 1991/92 before finishing his career with a spell in Japanese football at Nagoya Grampus Eight.

Arguably the defining English player of his generation and an iconic figure, Paul Gascoigne’s story is one of flawed genius.

Gascoigne broke through at boyhood side Newcastle before bigger clubs began to circle the gifted midfielder, the star signing for Tottenham in a British-record deal despite strong interest from Manchester United.

It was with the north London side – as well with England – that we saw the best of Gascoigne, arguably the most naturally talented player the Three Lions have ever produced and at his best, one of the world’s finest footballers.

Gascoigne’s free-spirited style was infectious to those around him and he delivered no end of magic moments for Spurs, his finest, a stunning free-kick from distance as Arsenal were beaten in the FA Cup semi-finals on the club’s way to winning the trophy in 1991.

His career changed following a serious knee injury in the final of that competition, eventually leaving Spurs to sign for Lazio where he became a firm favourite in the Italian capital.

After a successful spell with Rangers, his later career included short stints at Middlesborough and Everton, though the version of Gascoigne that spent two seasons at Goodison Park was a pale imitation of the one who wowed crowds at his best.

It takes a special player to scoop the game’s biggest individual accolades whilst playing in a mediocre team, but David Ginola was a player whose talent was difficult to ignore.

The fleet-footed Frenchman became one of the Premier League’s most exciting talents during a spell at Newcastle’s entertaining side of the mid-nineties, a winger capable of beating players effortlessly and possessing improbably two-footed technique.

Ginola’s box-office brilliance spent two seasons in the north east before making the move to Spurs, where, in three seasons he became a firm favourite for his style, skill and showmanship.

Ginola formed part of the side that won the League Cup during the 1998/99 campaign, a season which saw him win the PFA Player of the Year and FWA Footballer of the Year accolades – ahead of the stars of Manchester United’s treble-winning side – despite Spurs finishing in the Premier League’s bottom half.

The flamboyant Frenchman possessed a penchant for the spectacular and amassed a highlight reel of glorious goals, spending two seasons with Aston Villa upon leaving Spurs before a short spell at Everton delivered just five league appearances.

Signed from Leeds as a teenager for just £1 million as the Yorkshire side encountered financial difficulties, Tottenham’s acquisition of Aaron Lennon proved brilliant business.

The winger spent a decade with the club and played a key role in their successes, an electric wide talent whose lightning pace left many a full-back chasing shadows.

Lennon’s first season saw him called into the senior England side for the 2006 World Cup following a succession of exciting performances, the winger nominated for the PFA Young Player of the Year for three consecutive campaigns between 2005/06 and 2007/08.

There was an endearing simplicity to Lennon’s game, a winger who hugged the touchline tightly and raced to the byline on countless occasions before delivering – often erratically it must be said – from wide on the right.

The England international excited fans, however, but after thriving in an entertaining team under Harry Redknapp his influence began to wane and after 364 appearances in all competitions he left for Everton – although he didn’t look so pleased about the move in his official photo.

Lennon: “It was nothing really. The photos might have turned out that way but I’m buzzing to be at Everton.” #THFC pic.twitter.com/ndRMQvQQ7H

He spent four seasons with the Merseyside club and made 77 appearances, but the declining fortunes of the traditional winger made Lennon appear a throwback even in the midst of his later career.

Gylfi Sigurdsson will hope to form part of the Everton side for this evening’s clash against his former side, having spent two seasons with Tottenham between 2012 and 2014.

The Icelandic midfielder broke through at Reading before a spell in the Bundesliga at Hoffenheim, a subsequent impressive loan spell at Swansea attracting several suitors from England’s top tier.

Spurs secured his signing in an £8m deal as the midfielder became the first arrival of the Andre Villas-Boas era, but he struggled to command a regular starting place in the side and rejoined Swansea in search of opportunities after just 19 league starts across two seasons.

The move proved a brilliant decision as Sigurdsson thrived once again in South Wales, becoming one of the Premier League’s most productive creative midfielders during his time with the club.

He spent three seasons at Swansea and was named as the club’s Player of the Season in two consecutive campaigns, joining Everton in a club-record £45m deal in 2017.

He has since made 148 appearances for the Toffees, scoring 29 goals, but has often struggled to find his best role in the side since moving to Goodison.