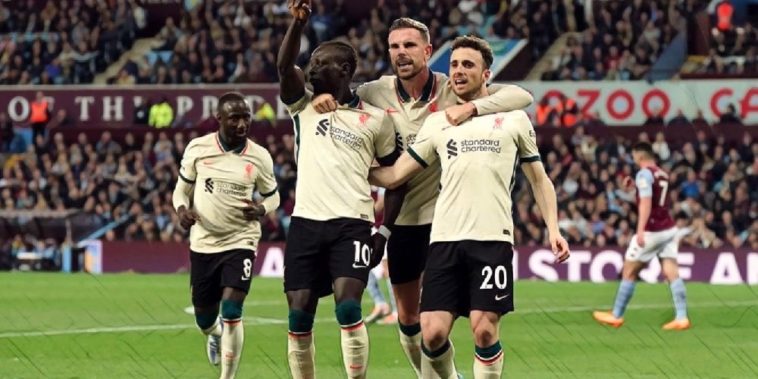 Liverpool maintained their hopes of a second Premier League title and an unprecedented quadruple following a hard-fought 2-1 win over Aston Villa.

Liverpool came into the game having dropped points against Spurs at the weekend, while seeing Man City stick five past Newcastle to open up a three point lead at the top of the Premier League going into the final three games of the season.

It was a rapid start at Villa Park as Steven Gerard’s side capitalised on some slack Liverpool defending in just the third minute as the Villains took the lead. Douglas Luiz found himself unmarked at the back post as he met Lucas Digne’s cross, and while Alisson kept out his initial effort, the Brazilian followed up and finished off the rebound.

Less than three minutes later though and the scores were level after some more awful defending following a Trent Alexander-Arnold free-kick. Diogo Jota’s initial effort was blocked with the ball eventually dropping to Virgil van Dijk. The Dutchman’s effort was kept out by Emi Martinez, though fellow centre-back Joel Matip followed in and levelled the scores.

After its chaotic start, the game finally started to settle down, with Liverpool eventually starting to dominate possession, though Villa remained a threat on the break through Oli Watkins, Danny Ings and Philippe Coutinho.

Villa looked relatively comfortable in dealing with the threat of the title chasers, though would eventually fall behind in the 65th minute as Diogo Jota released the ball into the path of the impressive Luis Diaz. The January signing put in a delicious cross from the left, picking out Sadio Mane in the middle who guided a glancing header beyond Martinez to move his side level on points with Man City at the top of the table.

Aston Villa certainly ensured it wasn’t a comfortable victory for Liverpool, with Danny Ings seeing a strike ruled out for offside as they continued to push forward on the counter attack, and speaking after the game, Jurgen Klopp said he was pleased with his side’s reaction to going behind early on in the game.

“It was a massive result and a massive performance,” he told Sky Sports. “After the games we have played and not a good start, we needed time to adapt, but made a very good response to going 1-0 down.

“We cannot do more than winning.

“I am pretty sure that a lot of people again thought this could be a struggle for us and how the boys sorted that is absolutely outstanding.

“Next we have the cup final on Saturday, and we will be ready.

Asked about a potential offside in the build-up to Villa’s opener, Klopp said: “If you think I only speak about these things when we lose, this is a problem which needs solving.

“It was an obvious offside situation but was just played on and we were under pressure at that moment. VAR today was not important [in the end], but in general, we could really think about how we could solve that.”

Liverpool midfielder Fabinho was forced to be withdrawn midway through the first half with an injury, and Klopp is hoping that that it is ‘not too bad’ ahead of a definitive period of the season.

“He felt something, which is a big blow for us. Hopefully it is not that bad, but we don’t know.”

Sadio Mane – who has been linked to Bayern Munich in recent days – has now netted 12 goals for Liverpool since the start of February, and the Reds boss was full of praise for the Liverpool number 10’s influence.

“He’s a machine, I told him after the game. He is a massive player. His physicality is brutal. He is a mix of technique, desire and physicality when at the moment everyone has a few yards in the legs. You can see it with him to be honest.

“Top goal, he is just a fantastic world-class player.”

Next up for Liverpool is the FA Cup final against Chelsea, before Premier League fixtures against Southampton and Wolves.