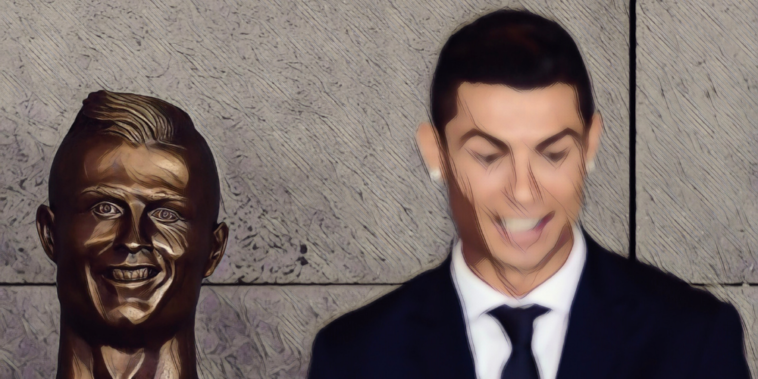 Being awarded a statue is perhaps the ultimate individual honour for footballers, a permanent commemoration of their achievements in the sport.

Manchester City are the latest side to unveil statues honouring club greats, revealing their tributes to Vincent Kompany and David Silva over the weekend.

The duo formed part of the spine of a side that dominated the Premier League, each playing an unmistakable role in City’s transformation into a sporting superpower following the club’s billionaire backing.

The eye-catching structures reside outside the Etihad stadium and have gone down well with supporters, though not all footballing statues have proven quite as successful.

Here are some of the best and worst football statues.

Arsenal unveiled statues to three club greats on the club’s 125th anniversary celebrations, and it’s fair to say the Gunners did well with these efforts in comparison to some sporting statues later in this list.

Each player played a prominent role during the north Londoners successes of the Premier League era, with the depiction of Bergkamp particularly impressive.

There can be few players more deserving of a statue than Cristiano Ronaldo, a footballer who has shattered all manner of records on his way to becoming one of the all-time greats.

The record goalscorer in the history of Real Madrid, Portugal, the Champions League, and international football was ‘honoured’ with this bizarre tribute in his hometown of Madeira.

After renaming the city’s airport as Cristiano Ronaldo International Airport in 2017, this ‘work of art’ was revealed with social media users quick to point out its likeness to Niall Quinn and the Art Attack head amongst others.

I don't know what you're talking about guys, I think the Ronaldo statue looks pretty good pic.twitter.com/JIUwQBuqUY

There have been multiple questionable Ronaldo statues, but this is by far the worst.

Manchester United’s ‘holy trinity’ statue sits proudly outside the club’s Old Trafford home, a tribute to the club’s iconic side of the 1960s that became England’s first ever European champions.

The star names in that team were Charlton, Best and Law, with the statue a popular site for visitors to the Red Devils’ historic stadium.

It cost Southampton £112,000 to make their first attempt at a statue for Ted Bates, the cost clearly not enough to fund arms and hands of a normal size.

The out of proportion statue soon attracted complaints and was replaced with a more fitting tribute to the former player and manager who dedicated four decades of service to the Saints.

Here's a comparison of the original Ted Bates statue and the version that was commissioned following complaints. pic.twitter.com/QygYQLBKP8

One of Sweden’s favourite footballers, Henrik Larsson was honoured with a statue in his hometown of Helsingborg in 2011.

A favourite of travelling Celtic fans, the forward’s feature boasts one of finer surroundings amongst football statues, overlooking the North Sea.

Honestly, we’re just not sure what to make of this one.

Quickly compared to Harry Potter’s Dobby, Gail Platt and Marv from Home Alone, it’s fair to say it resembles each of those as closely as it does Liverpool’s ‘Egyptian King’.

A new @MoSalah statue was unveiled today… And it's different? 😂pic.twitter.com/NY17yhRxyl

Nigel Pearson, is that you?

Situated outside Newcastle’s St James’ Park, this is not a tribute to the Magpies’ former assistant manager but one indeed for Alan Shearer.

The Premier League’s greatest ever goalscorer and scorer of a record 206 goals in the colours of his boyhood side, it’s fair to say that Shearer enjoys god-like status in the north east.

Having wheeled away in celebration on more occasions than any other Newcastle player, it’s strange that the constructors could not get Shearer’s signature raised palm celebration right.

Unmissable during his playing days and similarly recognisable in statue form, this commemoration of Carlos Valderemma is an eccentric masterpiece and fitting celebration of the Colombian icon.

Santa Marta in Colombia must be by far the best place to visit in the whole world because the Carlos Valderrama statue is only rated #17 of the 49 best things to visit there on Tripadvisor: pic.twitter.com/pAwITjbvts

It may not be wholly lifelike and the pose chosen is different to say the least, but it’s bonkers and brilliant nonetheless.

One of Ghana’s greatest exports, the former Chelsea midfielder was awarded a statue in his home country in 2018.

In 2018, a Ghanaian sculptor created arguably the best statue ever for the great man himself… 👀🤣 pic.twitter.com/3oBroHZe12

If Valderemma’s was a masterpiece, this should be filed under monstrosity and is the kind of figure that haunts the dreams of children.

It’s been a decade and we’re still unsure as to why Fulham owner Mohamed Al-Fayed erected this MJ monument, with no correlation between the King of Pop and west London side.

The statue received a negative reaction from fans who called the club a ‘laughing stock’, though Al-Fayed was undeterred and called supporters ‘stupid’ if they cannot appreciate the ‘gift’ Jackson gave to the world.

“If some stupid fans don’t understand and appreciate such a gift this guy gave to the world they can go to hell.

It remained outside Craven Cottage for two years, before being removed by new owner Shahid Khan in September 2013.