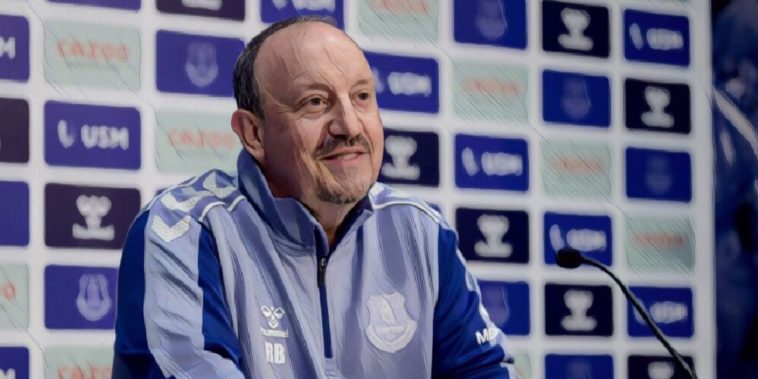 Everton boss Rafa Benitez has demanded improvements in every department within the club’s setup, as he looks to steer his new side towards the top end of the table.

The Spaniard was originally a hugely polarising and controversial appointment having previously spent six years at Merseyside rivals Liverpool, where he notably won the Champions League in 2005.

Since his arrival at Goodison Park in the summer, however, the 61-year-old has already made an impressive impact, with Everton currently eighth after picking up 14 points from their opening eight league games to leave them just a point off the top four.

While it has been a strong start to life at the club for the former Newcastle United boss, the vastly experienced coach is seemingly intent on helping the club improve even further and is keen to enhance every aspect of the club’s set-up.

Benitez appears to have already begun those improvements, with Everton recently appointing Cristian Fernandez as a first-team rehabilitation fitness coach, in order to try and combat the ‘repeat injuries’ that have been suffered by members of his squad this season, as well as under his predecessor Carlo Ancelotti.

Forward Dominic Calvert-Lewin recently suffered a setback in his recovery – the England international having not featured since August – while Yerry Mina and Abdoulaye Doucoure also joined the club’s lengthening injury list.

Ahead of the clash with Watford on Saturday, Benitez has insisted that the shake-up of his medical department is part of his larger desire to take the club forward, as he seeks to make them a ‘competitive’ outfit once again.

Everton boss Rafa Benitez provides an update on Richarlison ahead of their Premier League fixture against Watford. pic.twitter.com/3e6Cl6YDHD

“I have a lot of confidence in my staff but if we have to do something then we will do it,” he said. “One thing I want to be very clear is that I am trying to improve every single department. The fans, the club, the owners who have spent a lot of money, they are desperate to be competitive.

“I said in one press conference that eighth [place] means nothing to me and I really mean that. I don’t want to stay here and try to survive. I want to be sure I can improve anything with my experience, my view and my staff.”

Benitez admits that while his main focus is improving the players, he wants every department to improve by 5%-10% in order to give his side the best possible chance of success.

“The main thing will be the players,” he said. “I am not stupid. It depends on the players what we do on the pitch. I want to be sure every player understands what it means to play for this club and go on the pitch in front of the fans and give everything. They are doing that and I think the fans appreciate the effort of the players. But it has to be the same in each department.

“When you see the money spent the club has to be in a much better position. You have to compete against all the teams and it is not straight away that you start winning games and doing everything right. I will be the first to make mistakes, but I have experience and I want to win. How can we win? By improving 5%-10% in each department.”