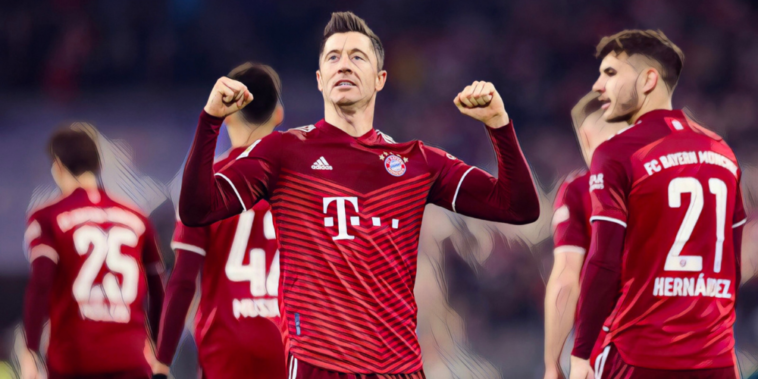 Bayern Munich remain ‘relaxed’ over Robert Lewandowski’s future despite interest from Barcelona in the forward.

Lewandowski will have just a year remaining on his contract this summer and has so far failed to agree terms on a new deal with the Bundesliga champions, with Barcelona reported to be interested.

The Spanish side want to sign a leading forward this summer and are understood to be considering a move for Lewandowski, who has enjoyed another outstanding season to score 47 goals in just 41 appearances for Bayern in all competitions.

Sport are reporting that Bayern remain relaxed over the Poland international’s future, however, with general director Oliver Kahn having told Münchner Merkur that ‘voices from outside’ won’t pressure the club when it comes to negotiating a new deal.

Lewandowski has spent eight seasons with Bayern Munich since arriving from Borussia Dortmund on a free transfer in 2014 and has scored 341 goals in 371 appearances for the Bavarians.

The 33-year-old is the second-highest scorer in both Bundesliga and Bayern Munich history behind Gerd Muller, and is 56 goals from equalling Muller’s record as the leading scorer in German top-flight history.

Having broken the record for most goals in a Bundesliga season in 2020/21 (41), he leads the rankings at the top of the division once again and is pursuit of a fifth consecutive top scorer accolade and record-equalling seventh accolade.