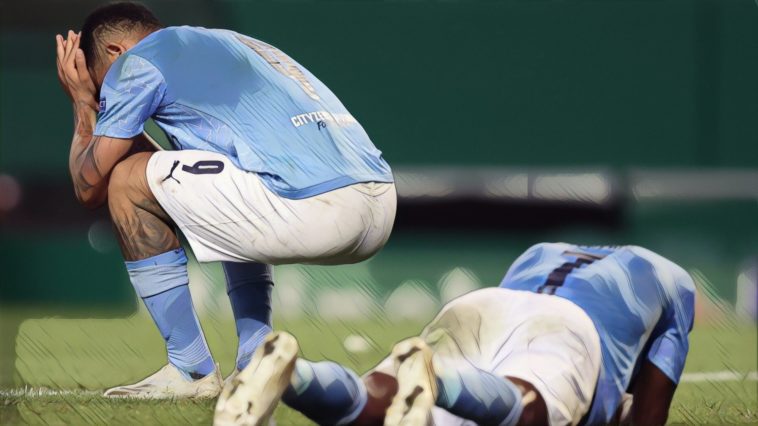 The look on Raheem Sterling’s face said it all, as did the manner in which Pep Guardiola fell to his knees.

It wasn’t quite as dramatic as when the downtrodden manager slowly slipped to the ground in the dying stages of last year’s quarter-final clash with Spurs, but it was still telling: it was ordained at that moment that this was most definitely not Manchester City‘s night.

The English winger had just been played in by Gabriel Jesus in the six yard box, the goal gaping in front of him, only to pop the ball over the bar. It was the single worst miss of his career, one he will likely never live down.

Just moments later the roles were reversed, Sterling teeing up Jesus right in front of goal. It wasn’t as clear a chance, but it was the Brazilian’s best of the night – and he fluffed it, smacking the ball into the ground with a volley before it bounced safely over the endline.

Sometimes there's nothing else you can do.

Just 70 seconds later Lyon went up the other end of the pitch to retake the lead. A two goal swing, a killer blow. In the 15 minutes leading up to Moussa Dembele’s goal, Man City had taken eight shots, two of them on target, while their French counterparts had taken just one solitary shot in the same period.

City had been amping up the pressure, creating the best chances of the match, and yet they somehow ended up losing by two clear goals, exiting the Champions League at the quarter-final stage yet again. One might construe this outcome as a freak result, but in all reality it was just a microcosm of their entire season.

Even before kick-off it was obvious that Pep, in classic form, had over thought his team selection, having run an infinite number of mental algorithms before turning to a random name generator to pick the starting lineup for him. How else can you explain his tactical choices?

Guardiola raised some eyebrows by going with a back three, despite playing some form of 4-3-3 or 4-2-3-1 all season. Only once had he gone away from the back four, when he successfully combated Sheffield United’s overlapping centre-backs in January. He continued to mystify everyone by leaving Riyad Mahrez, Phil Foden, and David and Bernardo Silva on the bench. He inconceivably proceeded to keep things as they were until the 56th minute, meaning he lost over a half of this game for nothing.

Pep’s tinkering has long been a feature of this City team, but this seemed excessive. Having scored more goals than any other team in Europe’s top five leagues and facing the seventh best side in France, why was he trying to make this an ugly, dogged contest with Lyon?

Perhaps he has no faith in his backline anymore (assuming he had any to begin with), feeding into the second common feature of their season that was reflected in this match: City’s defence just is not what it once was. As has been the case for the past year, they were vulnerable down the middle against Lyon, conceding twice from counter-attacks in the second-half.

Up against the pace of Maxwel Cornet, Karl Toko Ekambi and Memphis Depay, Guardiola’s decision to start the leaden-footed Ilkay Gundogan and Rodri backfired. The back three didn’t stop them from conceding in the first half, and it blunted their immense attacking threat at the same time.

Just another night of the Champions League drama we've come to expect ?

All of the action as Lyon stunned Man City in Lisbon ?#Club2020 pic.twitter.com/6Xd8VA3bmQ

The absence of Vincent Kompany has long been established as the conventional wisdom for their defensive woes this season, but the problem is twofold. While the Belgian’s leadership is sorely missed, it’s worth noting that he only featured in 17 league games last season. Is it really possible that his exit has had this much of an impact on the team?

It’s possible, but it is Fernandinho who this side really misses. During the two title-winning seasons the Brazilian was the bedrock of the defensive effort as the team’s midfield destroyer, killing dead any attacks that came through the middle of the park. This was achieved through incredibly cynical fouling, but it was hugely successful when you consider he has only received 6.8 yellow cards per season.

At 35 years of age he is no longer in the kind of physical shape that would allow him to perform the role to the same degree. Although he started 26 league matches this season, many of them were at centre-back while Rodri took his place at the base of midfield. The Spaniard is a very good player, but hasn’t shown he can replace his predecessor just yet.

The cumulative effect of Kompany’s exit and Fernandinho’s decline has been devastating for City, but it’s also unfathomable that they have spent so much money on their backline yet found so few solutions.

On top of this, the third major factor in City’s poor campaign is the footballing gods laughing at them even while they are playing some of the best football in the world. On numerous occasions, Guardiola’s charges have been the far better side only to somehow come away without the win, killed by the randomness of football.

City’s fate in this regard was clearly sealed from the off when they battered Spurs in the second game of the season, only to be sucker punched by two goals out of nowhere and victory to slip out of their grasp. The return fixture was an even bigger drubbing in terms of the chances they created, and yet Jose Mourinho’s side won 2-0. It was a similar story against Norwich City, Man United and Southampton, leading to a series of unlikely defeats, as well as their draw with Crystal Palace.

Kevin de Bruyne is left to lament another disappointing exit from the Champions League for Manchester City.

And now you can add Lyon to that list. Despite all of the aforementioned problems, City were clearly the superior team creating the better chances. With 71% possession, eight of their 19 shots on target and 2.4 expected goals (versus Lyon’s 1.1 xG), they should have done more than enough to win.

And perhaps if Dembele had been called for a foul on Aymeric Laporte in the buildup to his first goal or Ederson not made a rare howler for the third, they would have. But that is both the beauty and cruelty of single knockout competition; there are no second chances and mistakes are doubly punished.

This has been the story of City’s season, though. No matter how scintillating in attack they’ve been, no matter how much they run up the score against weaker teams, it hasn’t been enough. Despite scoring 145 goals in all competitions and ‘ won’ the Premier League by 13 points based on xG, they end the campaign with just the League Cup in their back pocket.

Maybe there’s some bigger problem beneath the surface. Or maybe they’ll get a better rub of the green next season. Time will tell.