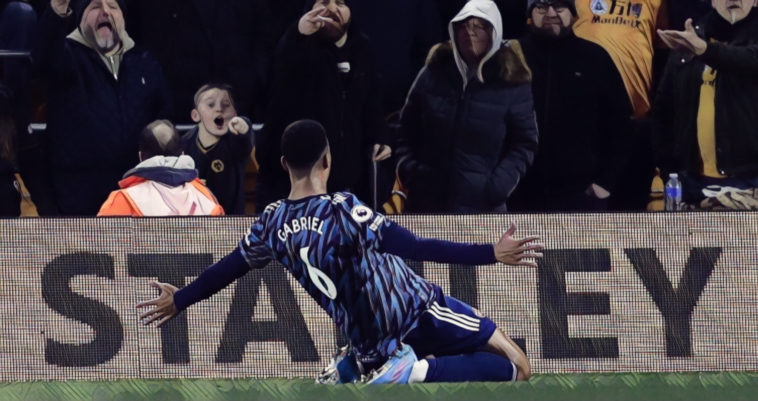 Arsenal enhanced their hopes of finishing in the top four by securing a hard-fought win away to Wolves tonight.

The game started in pretty tepid fashion with neither side looking confident in possession and lacking any attacking verve.

Arsenal would liven up proceedings in the 25th minute though when they took the lead through Brazilian centre-back Gabriel. Gabriel Martinelli had whipped a corner in from the left which Wolves made a mess of clearing, allowing the Brazilian centre-back to tap home into an empty net from just a couple of yards out.

Going behind seemed to awaken the home team and their fans, with Arsenal’s centre-back pairing of Ben White and Gabriel soon called into action to clear away a host of dangerous deliveries from either flank.

Clear cut chances continued to be at a premium during the second-half, but Wolves would be handed a major boost to their hopes of equalising on 69 minutes when Martinelli was sent off in bizarre circumstances. In a turn of events you rarely see, the youngster was shown two yellow cards at the same time having twice tried to halt the same Wolves counter-attack.

Gunners skipper Alexandre Lacazette then missed a glorious chance to score a crucial second for his side before Arsenal retreated to the edge of their own box in the hope of holding out the hosts.

Despite continually firing the ball into the area, the closest Bruno Lage’s side would come to scoring was through substitute Chiquinho’s close range effort that was scrambled off the line and Arsenal held on for a vital win that sees them move up to fifth in the table with two games in hand on fourth placed West Ham.

Speaking afterwards Arsenal boss Arteta hailed his sides spirit and character, but admitted his patience is wearing think with his team’s habit of having a player sent off.

“To win football matches like that [with 10 men] is extremely difficult and we have to stop it,” Arteta told BBC Sport.

”We’ve been talking about it. I have run out of ideas [about how to stop it], I think.

“The character, how we dug in, the spirit we showed, I’m really proud of the boys. There was togetherness and unity.

“We need to play with 11 players in the last 16 games and that is key. To win games with 10 men is very unlikely.”

Next up for Arsenal is a home clash against Brentford on the 19th of February.