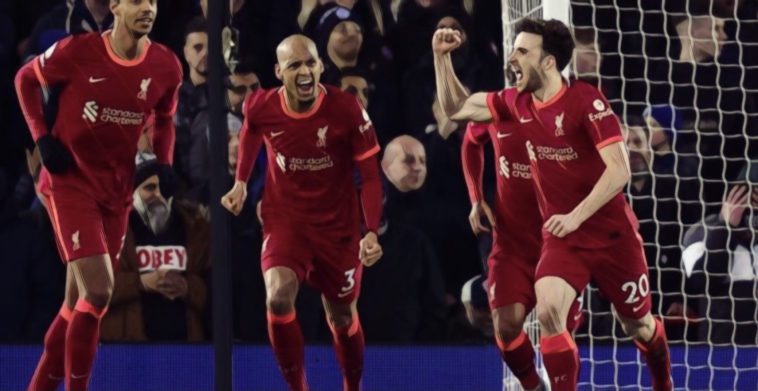 Liverpool continued their excellent run of form with a convincing 2-0 win over a struggling Leicester side at Anfield tonight.

Leicester came into tonight’s game on a woeful run of form and considering Brendan Rodgers side had not kept a Premier League clean sheet in 16 fixtures it was no big surprise when Diogo Jota put Liverpool ahead on 34 minutes. Foxes ‘keeper Kasper Schmeichel initially saved Virgil Van Dijk’s powerful header from a corner, but the Danish international could only force the ball into the path of Jota who slotted home gleefully from close range.

The returning Mohamed Salah entered the fray on the hour mark and the Egyptian superstar looked intent on putting his AFCON woes behind him by finding the back of the net. However, the prolific attacker missed a one-on-one before he saw a fine curling effort hit the crossbar.

On 86 minutes Liverpool would finally find the second goal that their domination deserved and it would once again come from the red hot Jota.

Liverpool remain nine points behind league leaders Man City – albeit with a game in hand – after tonight’s win, and speaking afterwards, Jurgen Klopp felt his sides victory was deserved.

”The set-up was a little like they played against us in the first league game. I don’t think they had too many finishes but they had moments that we had to defend.

”We had the bigger chances and we deserved the win. It was for sure not the best we ever played but it was really good enough to win.”

The entire Everton team only has 25 🔴 pic.twitter.com/YbrXhAQUNl

Matchwinner Jota’s brace tonight was the 25-year-old’s 16th and 17th of the season and the German coach waxed lyrical about the Portuguese attacker.

“The second goal is a brilliant goal,” Klopp gushed. ”A counter-press. I love it. Jota with a little genius moment to put it into the right spot. The first goal is really when you are in a goal-scoring moment then you are there. He is in that. Really happy for him and for us.

“We had a sense it could happen. He is not a bargain or whatever and we did not get him for free! But we hoped. He is still a young lad. We create more chances than Wolves did in all respect. We really thought he would be an outstanding player. He was already but he has improved for sure.”

Next up for Liverpool is an away trip to Burnley next Sunday.