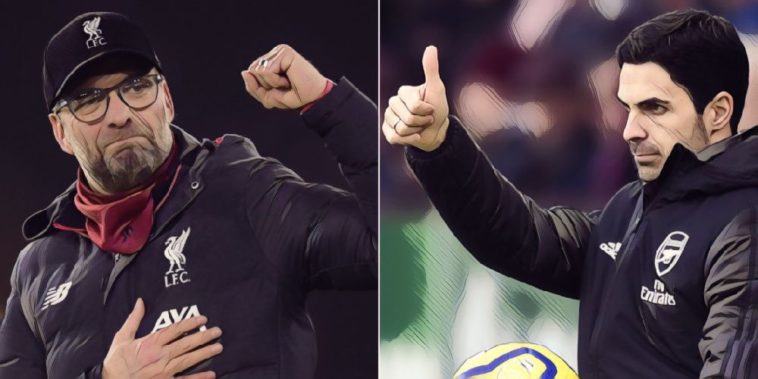 Mikel Arteta has lavished praise on Jurgen Klopp and his ‘smart’ rebuild of Liverpool, before urging Arsenal to ‘invest’ despite the club’s lack of Champions League football.

Arsenal host newly-crowned champions Liverpool this evening at the Emirates, with the visitors closing in on the Premier League’s all-time record points total following a season which has seen the Reds end a three-decade wait for a top-flight title.

The Merseyside club have developed into one of the finest sides in world football during Klopp’s five seasons in charge, and Arteta revealed his admiration for the progress Liverpool have made under the German’s guidance.

“What they have done is phenomenal,” Arteta said at his pre-match press conference. “Obviously the first two years it took them some time to rebuild the squad and to create a new culture, a new philosophy and a game model that suited the coach.

“Then they started to recruit every single player in relation to what they needed and that’s where I think they were really smart. They bought with specificity for every position that was required.

“Financially they had a big backing and made some big signings which completely changed the club in my opinion.”

Arteta was asked if he sees similarities between Arsenal’s current position and the job Klopp inherited at Liverpool almost five years ago and while he was keen to differentiate between the two, he said the rise of the Reds is a ‘great example’ to follow as the Gunners seek to challenge in the coming seasons.

Mikel Arteta says it would be a "massive blow" if Arsenal did not qualify for Europe next season.

Will the Gunners boost their chances with a win against Liverpool tonight?

“If you ask me that question in four years and we’re both sitting here and I can tell you ‘Yes, we’ve done it’, I will be so happy,” he said. “But I know how many decisions have to be right and how much support you need from the club and the people around, and how much connection you to have to generate from your fans to have the full package, and afterwards it’s football.

“The context right now is different to what it was as well four years ago and the abilities for a club to rebuild something is more limited, but it’s certainly something we have to look at and how they did it because it’s a great example.

“But we have to know that we have to do it our way with our resources and have it in mind that the content right now is different, but we are heading to be the best and this is my only objective with this club. We have to find a way to do it.”

Arsenal currently sit ninth in the Premier League and will spend a fourth consecutive campaign outside of the Champions League next season, and Arteta has warned that the gap will only become bigger to Europe’s elite if they fail to invest in the side this summer.

“[It will be] Harder and harder [to get back into the Champions League] because that’s obviously something that has to feed each other,” he added. “If you are not in the Champions League and you say ‘OK, I don’t invest because I don’t have the financial ability to do it’, but the other clubs invest, then the gap becomes bigger.

“If I do want to invest and risk, and then I don’t reach it, what happens? So at some stage you have to make a decision, whether I want to aim to make that gap closer and go for it, or I stay where I am.

“You see many good examples of teams that have done it [risked] and they have come back to their habit [of being in the Champions League].”