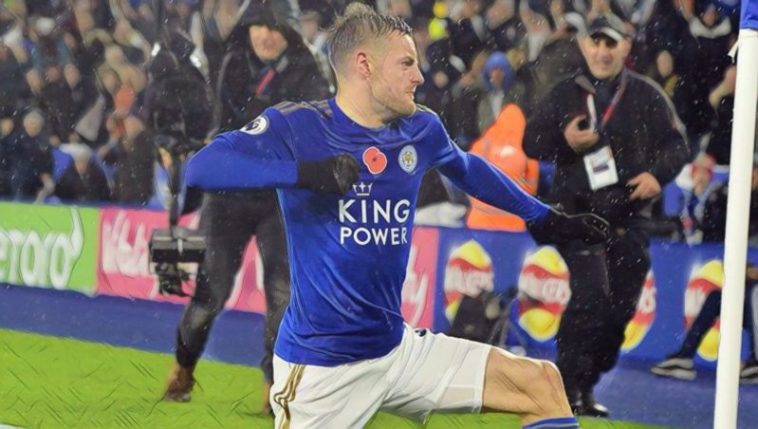 Jamie Vardy continues to edge closer to the Premier League’s Golden Boot following another sensational season at Leicester, the forward leading the race to finish as the division’s top scorer following a fine run of form since the restart.

The Foxes’ forward recently joined the Premier League’s 100 club after reaching a century of top-flight goals with a brace against Crystal Palace, a phenomenal achievement for a player who did not make their Football League debut until the age of 25 and their Premier League bow two years later.

Vardy set a new record of 11 consecutive games scored in during Leicester’s title-winning season four years ago, whilst his formidable record against the division’s leading sides has seen him score almost a third of his goals against the Premier League’s traditional ‘top six’.

We’ve decided to look back at the 33-year-old’s preferred opponents throughout his Premier League career, here are the five clubs Jamie Vardy has scored the most goals against:

The first top-six side to feature on this list, Vardy’s menacing style has proven problematic for Manchester City’s defence in recent seasons.

Often referred to as a big-game player, the forward has scored six times against the Manchester side throughout his Premier League career, the most memorable occasion a scintillating hat-trick – the first top-flight treble of his career – in a thrashing of Pep Guardiola’s side at the King Power Stadium in 2016.

Vardy’s haul has come in 11 league appearances against City – his most recent being a consolation in defeat at the Etihad earlier this season.

Only three teams have been on the receiving end of Vardy’s clinical talents more than Everton, the forward scoring six times against the Merseyside club throughout his Premier League career – including a goal in a 2-1 victory over the Toffees earlier this season.

Vardy’s tally has come in just nine Premier League appearances, his fruitful record against Everton contributing to a haul of 103 goals in just 208 appearances – the Leicester forward becoming the 12th quickest player to reach the division’s fabled 100 club and possessing the seventh-best goal-per-game ratio of any of its illustrious members.

Vardy’s goal against Bournemouth in midweek took the forward to seven goals against the Cherries, with only one side having conceded more goals to the Leicester star.

The 33-year-old’s strike on the south coast may have proven nothing more than a consolation in a disappointing defeat for Brendan Rodgers side, but it was a much different story earlier in the campaign as Vardy scored one of the stand-out strikes of his Premier League career.

The jet-heeled star raced away in typical fashion before executing a sublime lob with the outside of his right boot, setting Leicester on their way to an early season victory with a well-taken brace.

There’s just something about Vardy and the biggest of occasions, the Leicester talisman having produced some of his career-defining moments against the Premier League’s biggest sides.

Only one side has conceded more goals to the effervescent star than Liverpool, a side who Vardy scored arguably his greatest ever Premier League goal against during the 2015/16 campaign.

Claudio Ranieri’s side were beginning to build genuine belief they could be crowned champions for the first time ahead of the visit of Jurgen Klopp’s side in early February, their confidence increasing following a virtuoso Vardy display against the visiting Reds.

Vardy opened the scoring with a sensational dipping volley before adding a second to seal a vital victory, his brace amongst seven goals he has scored against Liverpool in just 11 league appearances.

Arsenal fans must be sick of the sight of the Leicester forward, Vardy having haunted the Gunners since his meteoric rise from the depths of non-league football into the top tier of English football.

Vardy has scored more times against the north London side than any other opponent, netting both home and away against Arsenal this season including a dramatic late equaliser against Mikel Arteta’s men earlier this month.

It could have all been so different had Arsenal proven successful in their bid to sign the Foxes’ hit-man following Leicester’s Premier League triumph, Vardy remaining loyal and opting to sign a new contract to stay at the King Power Stadium amid the Gunners’ interest.