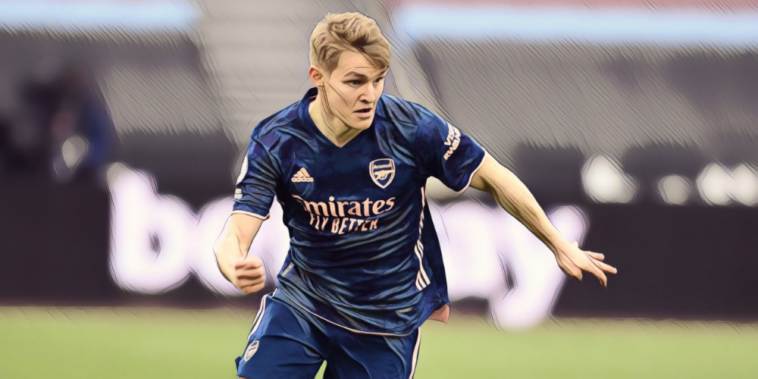 Mikel Arteta has praised Martin Odegaard following his instant impact at Arsenal and says the midfielder has quickly become a leader in the side.

Odegaard signed for the north London side on loan from Real Madrid during the winter window and has grown in influence in recent weeks, scoring his first Premier League goal during the victory over Tottenham last weekend before starring in Sunday’s thrilling 3-3 draw with West Ham.

Arteta has been impressed by the performances of the 22-year-old and admits the Norwegian has surprised the club with his leadership qualities, praising Odegaard’s desire to get on the ball and lead the Gunners’ pressing play.

“Well, he’s showing that I think from week one,” Arteta told reporters, as per Arsenal.com.

“The way he steps on the pitch, he always wants the ball, the way he commands the pressing. He’s been really influential.

“I think we’ve all been a bit surprised because he looks really shy and humble, but when he steps on that pitch he’s a real character and he loves to play football.”

Odegaard was a stand-out performer as Arsenal came from three goals down to secure a point at the London Stadium on Sunday, with the midfielder’s display catching the eye of his manager.

Arteta has hailed the loanee for keeping his composure as the Gunners fought back to snatch an unlikely draw, revealing his belief that Odegaard has provided his side with something ‘different’ since arriving at the Emirates.

“I think he had an incredible performance, he was very intelligent the way he read the game, the way he effected the game and again he showed how much he wants to win,” Arteta said.

“When everyone was a little bit trembling, he gave us that composure on the ball and he created chance after chance.

“I love talented and creative players that all the time are willing to take that ball and make things happen, that are mobile and also hard-working. He is one of them.

“We have some others with different qualities but it’s true that Martin is now giving us a different level on certain things that we didn’t have.”

Arsenal are believed to be keen to extend Odegaard’s stay at the Emirates beyond the end of the season, whether on loan or on a permanent deal, though according to The Athletic, there have so far been ‘no discussions’ between the two clubs.