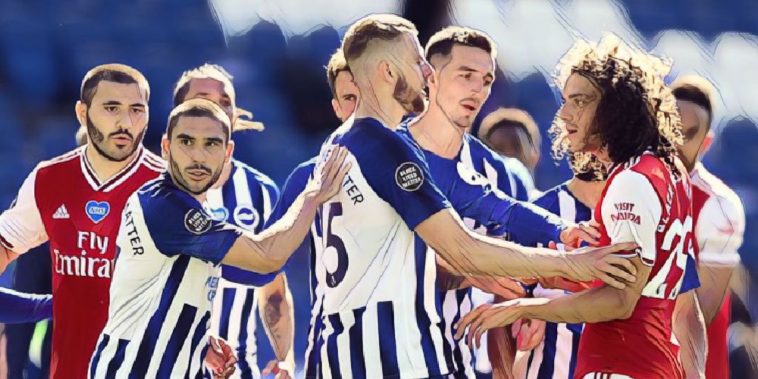 Mikel Arteta says he is not looking to find excuses following Arsenal’s poor performances since the Premier League’s restart and discussed a potential suspension for Mateo Guendouzi.

Arsenal suffered a late defeat to relegation-threatened Brighton on Saturday to make it back-to-back losses since the division’s restart, the Gunners having also been thrashed 3-0 at Manchester City in midweek.

Tempers flared following the defeat to the Seagulls and Arteta’s side may now be without midfielder Guendouzi through suspension, the 21-year-old facing the prospect of a three-match ban after being pictured grabbing Neil Maupay by the throat following the full-time whistle.

Arteta says he is yet to see the incident but has warned his side they must channel their frustrations in the ‘right way’, the north London side now languishing in 10th and facing an uphill battle to secure continental qualification for next season.

“When we show frustration we have to show it in the right way,” said Arteta, as per the Evening Standard.

“I haven’t seen the images [from Guendouzi] or what happened but we will talk about it if that is the case. Emotionally, we have to control the situations much better.

“I think every game is completely different. When I was talking about competing there are details when you go ahead and game management-wise where we have to improve a lot.

“But we are a very young squad, I don’t want to use it as an excuse because it is still a football game and it doesn’t matter at what age you are competing, but at this level you can’t do it.”

Arteta also refused to use consecutive away fixtures as an excuse for Arsenal’s poor restart to the season, insisting his side must compete to win games as they bid to salvage a disastrous season to date.

“It would be difficult at home as well without fans – we are taking a big part of what makes this sport so special,” he said.

“It is what it is, we are playing on fantastic pitches with the same distances and dimensions, 11 against 11, let’s compete and win football games, that is all.

“I think the preparations towards City and Brighton were completely different, even if we try to go on the same day.

“I don’t think it is an excuse for us to use about preparation, we had more than enough in the game to win it comfortably and threw it again so I don’t like to use excuses like this when we lose a football game.”

Eyebrows were raised by Arsenal’s decision to fly to Manchester for the game against City just three hours before the midweek kick off.