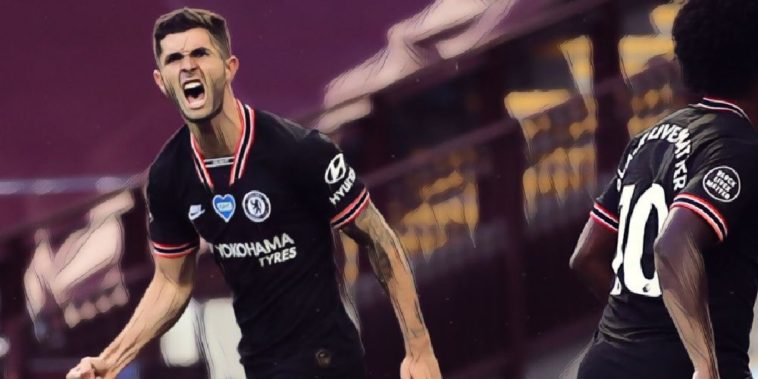 Christian Pulisic admits he’s ‘excited’ by Chelsea’s signing of Timo Werner and expressed his delight after making a goalscoring return to the side against Aston Villa.

Pulisic came off the bench and quickly scored Chelsea‘s equaliser as Frank Lampard’s side came from behind to secure a 2-1 victory at Villa Park, a result which extended the club’s advantage over fifth-placed Manchester United to five points in the race to secure Champions League football.

The US international had missed the club’s past eight league fixtures through injury prior to the season’s suspension and says he was keen to make an impact upon his long-awaited return.

“I’m really glad that I could come in and help the team in any way that I could,” he told Chelseafc.com. “Luckily I was able to get a goal and also help us get a great result.

“The manager just told me to go on and try and help us win the game. There was nothing special or anything in particular, I just wanted to try and use my talents and see what I could do. I’m happy I was able to do that.”

Pulisic admitted he was perhaps fortunate to see his effort hit the net after meeting Cesar Azpilicueta’s cross, turning home his sixth league goal of the season against Dean Smith’s struggling side.

“I don’t think I actually hit it perfectly with my left,” he admitted. “Luckily I got enough on it to steer it on target and I was just happy to see the ball go in.”

The 21-year-old also discussed the impending arrival of Timo Werner from RB Leipzig, admitting he is relishing the prospect of playing alongside the Germany international at Stamford Bridge next season.

“We already have a really strong team, with really good players and to add guys like that [Werner] it’s incredible,” Pulisic said. “We’re focused on this season for now, but at the same time we are excited for what’s to come.”