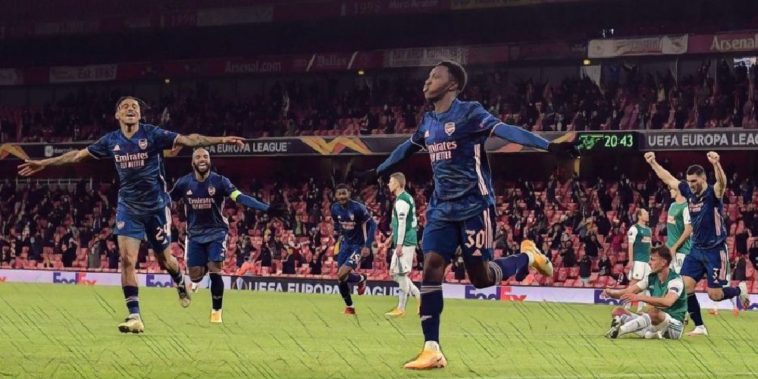 Mikel Arteta expressed his delight as Arsenal put in an excellent display to see off Rapid Vienna in the Europa League on Thursday night.

With the Gunners having already qualified for the knockout stages, the Spaniard was able to rest a number of key players, including out-of-form striker Pierre-Emerick Aubameyang who wasn’t involved in the matchday squad whatsoever.

Despite making changes, Arsenal looked impressive right from the off and – buoyed by the backing 2,000 home supporters – took the lead early on through a delightful Alexandre Lacazette effort. The Frenchman – who’d been deployed in a number ten role – picked the ball up in midfield before unleashing a stunning swerving strike that bamboozled ‘keeper Richard Strebinger.

The hosts then made it two inside 20 minutes courtesy of a fine glancing header from defender Pablo Mari, the Brazilian making his return after a six-month absence due to injury. Arteta’s men added a third just before half-time, with Eddie Nketiah rounded off an excellent team move, the England U21 international seeing his initial effort saved by Strebinger yet managed to nod home at the second opportunity.

Despite the away side grabbing a goal just after half-time through a rebound finish from Koya Kitagawa, the result was never really in doubt, with the Gunners adding a fourth through substitute Emile Smith-Rowe, the youngster making an instant impact in the 66th minute to tap home after good work from Nicolas Pepe and Nketiah.

To the 2,000 fans inside Emirates Stadium tonight and our supporters around the world.

That win makes it five wins from five in the competition for Arteta’s side and the former midfielder expressed his delight at the displays of a number of players as well as seeing the return of supporters to the Emirates.

“Many of them I am delighted with, the injured players who been out for so long they worked so hard we are so glad to have them back, to add numbers to the squad. [Alexandre] Lacazaette it was great to have him on the score sheet, some really good individual performances and some of the good from the young boys as well,” Arteta told BT Sport.

“The club has made such an effort to make sure today everything was set up in the right way so hopefully the fans had a good night, they were tremendous for us.”

After such a strong showing there may be a chance for some of Thursday’s performers to earn a place in the starting lineup for this weekend’s north London derby against Spurs, with Arteta outlining that it wasn’t out the question for an individual to have forced their way into his thoughts ahead of Sunday.

“We’ve seen that a lot of players playing on a Thursday who have strong performances in Europa who then play on the Saturday as well so yes I will be thinking about this performance,” he added.