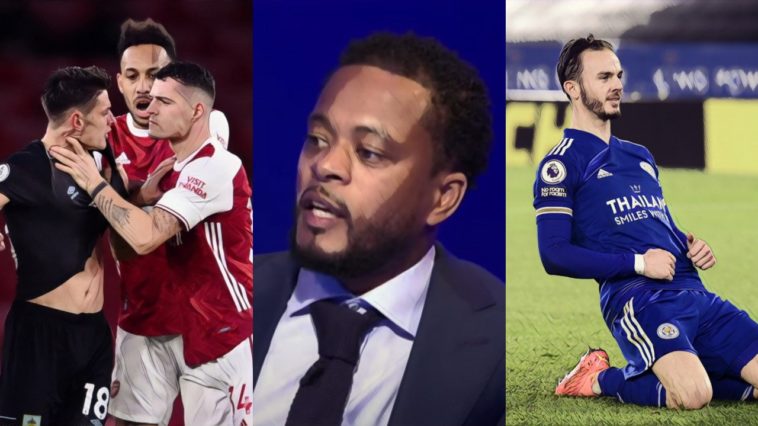 Every gameweek we reward the best – and worst – of the Premier League action with our weekly awards.

This week’s column features the bald headed stupidity of Granit Xhaka, the loose lipped Patrice Evra, a marvellous performance from James Maddison, and a wonder goal from Fulham.

Whether or not you think Patrice Evra is a good football analyst is kind of irrelevant to his TV performances on Sky Sports, because he always delivers something amusing, whether it’s bringing back up old Wilfried Zaha rumours, telling Roy Keane he’ll give the Man United players a lift home, or becoming a real life meme.

The Frenchman once again livened up our weekends by revealing an incredible story about Thierry Henry when the two were hanging out together:

Patrice Evra: “Thierry Henry invited me round his house once to watch the Arsenal game. I went round, Thierry Henry turned the TV off straight away and said ‘sorry, I cannot watch Xhaka be the captain of my club’.” #afc

We can’t imagine too many of Evra’s friends in football will be inviting him around much anymore while he’s still in punditry.

Imagine the cold sweats you'd get turning Sky on every Sunday if you've ever told Patrice Evra anything.

It’s been a difficult 2020 for James Maddison, who had to sit on the sidelines with an injury while his Leicester City teammates failed to hold onto their place in the top four last season. His fitness woes continued into this season and had to be content with starting five games on the bench for the Foxes.

But the midfielder is finally back fighting fit and delivered big time with two goals against Brighton. His general play was also magnificent, a reminder of why he should be in serious contention for a place in England’s Euro 2020 squad next summer.

Fantasy Premier League: Four of the best captaincy picks ahead of gameweek 13

Maddison’s strike was sweet, but Bobby De Cordova-Reid pulled an arrow from his quiver and directed it into the far corner of the Liverpool net. A sublime hit.

Speaking of Fulham, drink in this pass from Ola Aina. Have the Cottagers finally done some good recruitment?

Vicente Guaita was badly wrong-footed for Harry Kane’s goal, but he made a number of top class saves to deny Tottenham Hotspur victory at Selhurst Park. The Crystal Palace goalkeeper saved the best for last, though, stretching to stop Eric Dier’s free-kick in the 93rd minute. The facial expression says it all.

The Manchester Derby between United and City was one of the most unwatchable games of the season, but Roy Keane, as per usual, brightened it up somewhat with his punditry, excoriating both sides for being too matey.

“At the end of the game the staff were smiling and hugging, the players were chatting with each other. Just get down the tunnel and cut that… I don’t get it, everyone wants to be pals with each other and be popular.”

“You’re playing for these clubs, particularly Man United, to win football matches, not to be mates with everybody.”

It’s not been a good start to the season for Pierre-Emerick Aubameyang, has it?

Pierre-Emerick Aubameyang has scored more goals for opposition teams (1) than he has for Arsenal at the Emirates this season.

Leeds United got off to a great start when Mateusz Klich scored from the penalty spot in the first-half, but Illan Meslier gifted West Ham United an equaliser when he failed to grasp Tomas Soucek’s header.

It’s hard to believe Granit Xhaka was ever given the captain’s armband. The Swiss international is prone to blowing a gasket every now and again, as he did on Sunday when he grabbed Ashley Westwood by the throat. Why he did it is anyone’s guess, but he got sent off and Arsenal lost 1-0 at home to Burnley. Burnley!

It was Xhaka’s 40th card and third sending off since joining the club, who have had more red cards (6) since Mikel Arteta took over last year. It might be time to stop putting faith in the hot-headed midfielder.

Read: The Premier League clubs who survived relegation with the fewest points