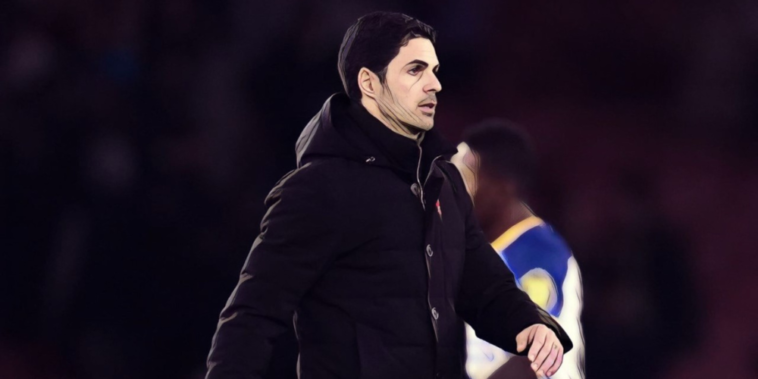 Arsenal crashed out of cup competition after a 3-1 defeat to Brighton at the Etihad, with the Seagulls coming back from a goal down to dump the Premier League leaders out in north London.

Eddie Nketiah had handed Arsenal the lead with a fine finish, but Danny Welbeck equalised from the spot against his former side. Kaoru Mitoma put Brighton ahead just before the hour, before Tariq Lamptey’s goal confirmed the Seagulls’ progress to the fourth round.

Arteta was disappointed with his side’s exit and believes the result failed to reflect the balance of the contest.

“I don’t think the result reflects what happened on the pitch, but the defence wasn’t in the boxes today. We created more than enough chances to win the game I think, but we come away with a painful result.

“We started the first 20 minutes of the second half really, really well. We were really dominant and we should have scored two or three goals, and in that moment we just conceded the second one and that changed the game.”

Arteta made ten changes from the team that won 1-0 at Chelsea last weekend and admitted the club’s cup exit proved that his squad needs additions.

“That’s the squad we have,” admitted Arteta. “We have to utilise in the best possible way and today we came short, especially because we didn’t do what we have to do in both boxes to win a football match. We paid that price.

“It’s the same squad as when we win. I said from day one that we have a short squad because at the end we left some players. It’s what we have.

“We know where we are and we have injuries in a squad that is already short. We have to manage that in the best possible situation.”

Arteta said new additions could arrive in the January transfer window, with the season’s pause for the World Cup providing managers with time to reflect and plan ahead for transfer activity.

“That’s a window that is open and we’ll have to discuss the opportunities that we have, the capacity that we have for any changes and be on the market for opportunities because we don’t know what’s going to happen the last game before the World Cup.

“So it’s a lot of options that are open.”