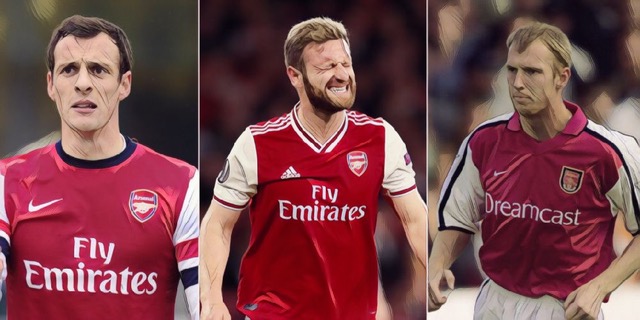 Few clubs can match Arsenal’s record of signing terrible centre-backs in recent years, a club once famed for its defensive prowess now often a laughing stock within the Premier League.

The north London side’s decline from title contenders to mediocrity is a sad reality for one of English football’s grand old clubs, their fortunes not helped by a horrifying recruitment drive when it comes to strengthening their now renowned Achilles heel.

We’ve decided to look back at some of the most dreadful defenders to head to the Emirates in the Premier League era, here are five of Arsenal’s worst centre-back signings:

The Latvian defender actually signed in an era when Arsenal were amongst the finest sides in the land, but soon exposed himself as a player horribly out of his depth at the highest level.

A goalscoring debut soon proved to be a false dawn, however, with a calamitous performance in a 6-1 defeat to title rivals Manchester United his most memorable contribution in a Gunners shirt.

Stepanovs surprisingly lasted three full seasons in north London but proved never to be of the standard required, his immediate post-Premier League career taking in spells at European heavyweights such as FK Daugava Rīga and Esbjerg fB.

Senderos was a hot property following his emergence in Switzerland and Arsenal reportedly beat off competition from the likes of Real Madrid and Manchester United to land the young defender in 2003.

What looked to be the loss of Europe’s elite was meant to prove Arsenal’s gain, though sadly for Senderos his career never quite took off despite some brief moments.

He played a key role in the club’s run to the Champions League final in 2006, notably keeping clean sheets both home and away to the likes of Real Madrid and Juventus in some of the best defensive performances of the Wenger era.

Senderos never quite evolved into the domineering centre-back he was once expected to, however, questions often raised about his ability to handle the pressure of the biggest occasions.

He joined Milan on loan in 2010 and later bounced round a succession of clubs, struggling with a succession of injury problems during spells a the likes of Fulham, Valencia and Aston Villa.

The bald bruiser rocked up in north London in 2002 but struggled to establish himself as much more than a fringe player, his defensive style often appearing flat-footed to put it politely.

He will, however, be forever immortalised as an ‘Invincible’ after making 18 league appearances during the club’s historic undefeated campaign in 2003/04, though it’s perhaps fair to say he’s arguably the least memorable component of that title-winning squad.

He made 98 appearances for the club in all competitions but commands little affection from the Gunners’ faithful, Cygan most remembered for this delightful terrace chant from his own support – “He’s bald, he s***, he plays when no one’s fit, Cygan!”

Has there ever been a more underwhelming signing in Arsenal history?

The arrival of Squillaci actually looked like shrewd business on paper for Wenger, the centre-back a full international with France and having won major honours with both Lyon and Sevilla before heading to the Emirates.

What conspired was as mediocre a player as the league has ever seen, Squillaci making a series of mistakes and establishing himself as a huge waste of space. The centre-back spent three seasons at the club, memorably refusing to leave despite soon falling firmly out-of-favour.

Happy to take home his reported £50,000-a-week for completing laps of the club’s training ground, Squillaci ranks as arguably the biggest pieces of deadwood in an era of deadwood in north London.

Shkodran Mustafi was a big-money signing from Valencia and the addition of the World Cup-winning defender was supposed to finally end an era of defensive fragility at the Emirates.

It hasn’t proved the case.

Mustafi’s notable list of high-profile blunders has seen the German become one of the most maligned figures in Premier League history, a regular punching bag for the rest of the division and subject of fierce criticism from his own support.

To his credit, the centre-back has continued to play through his difficult moments and fight for his career at Arsenal, though there is a sense his days are numbered after four seasons of error-prone service.

Such has been his flaws, Mustafi was voted as second worst defender in world football behind Manchester United’s Phil Jones in a poll conducted by Spanish publication Marca.