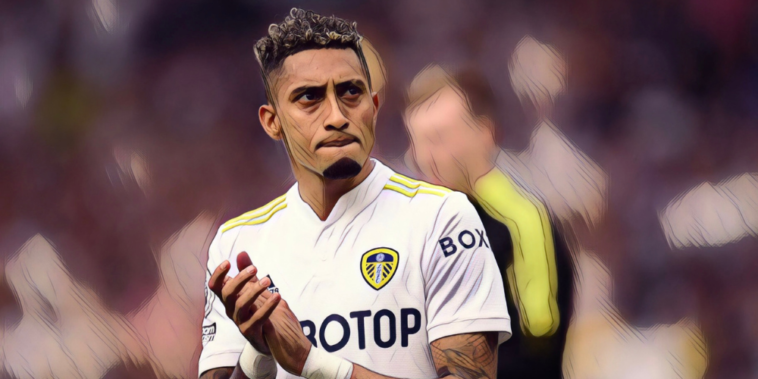 Arsenal’s opening offer for Raphinha is ‘expected to fail’ with the bid falling significantly below Leeds’ valuation of the winger.

The north Londoners have joined the race to sign Raphinha and have submitted an opening proposal to Leeds, though it is expected to be immediately dismissed with the Times reporting that the bid is ‘far below’ the club’s £50m valuation.

Mikel Arteta is keen to add the Brazil international to his plans for next season, but the Gunners face strong competition from Barcelona and Tottenham.

Raphinha – who has two years remaining on his current contract – has attracted interest from several leading sides after impressing across his two seasons at Elland Road, with the 25-year-old having scored 11 league goals for Leeds last season.

His performances have seen Raphinha break into the Brazil side and he is keen to test himself at a higher level, as he seeks to assure himself a prominent part in the nation’s plans for the 2022 World Cup.

Raphinha’s first-choice is to sign for Barcelona, but the Spanish side’s financial situation means matching Leeds’ valuation will be difficult. Arsenal are keen to capitalise despite their lack of Champions League football, whilst Chelsea are also said to be monitoring developments.

Arsenal’s technical director, Edu, is understood to have met Raphinha’s adviser, Deco, this week but the Gunners will need to improve their bid to persuade Leeds into a sale.

Arsenal are keen to conclude their summer business as soon as possible and have made early moves in the market, securing deals for Fabio Vieira, Marquinhos and Matt Turner.

Arteta’s side are also in ‘advanced talks’ to sign Gabriel Jesus from Manchester City as the Gunners look to improve their attacking options.