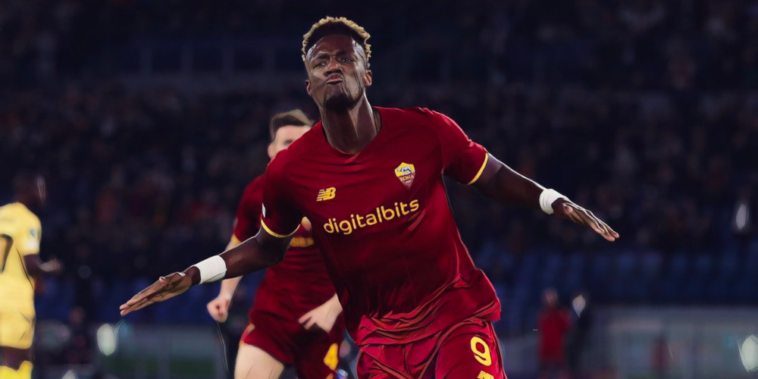 Arsenal are monitoring Tammy Abraham ahead of a potential summer move for the in-form Roma forward.

The Gunners will send scouts to watch Abraham in action as Roma take on Leicester in the Europa Conference League semi-finals on Thursday evening, with the England international having enjoyed an excellent debut season in Italy.

Abraham has scored 24 goals in all competitions for Roma since signing from Chelsea in a £34m deal last summer, setting a new club record for the most prolific first season with the Serie A side.

The 24-year-old is also the joint-leading scorer in the Europa Conference League and the Express are reporting that Arsenal are contemplating a move as the North Londoners consider centre-forward additions.

Abraham has earned a recall into the England squad following his performances in Serie A and it remains to be seen whether he would be interested in a Premier League return, having starred since leaving Stamford Bridge.

Roma are understood to value Abraham at around £67.5m, a figure equivalent to the buy-back clause Chelsea inserted into his sale last summer.

Arsenal are in need of forward additions with both Alexandre Lacazette and Eddie Nketiah out of contract at the end of the season, a situation that will leave Folarin Balogun – currently on loan at Championship side Middlesbrough – as the club’s only contracted centre-forward.

Mikel Arteta is also believed to be interested in Manchester City’s Gabriel Jesus and the Gunners are said to have entered ‘preliminary talks’ with the Brazilian over a potential move.