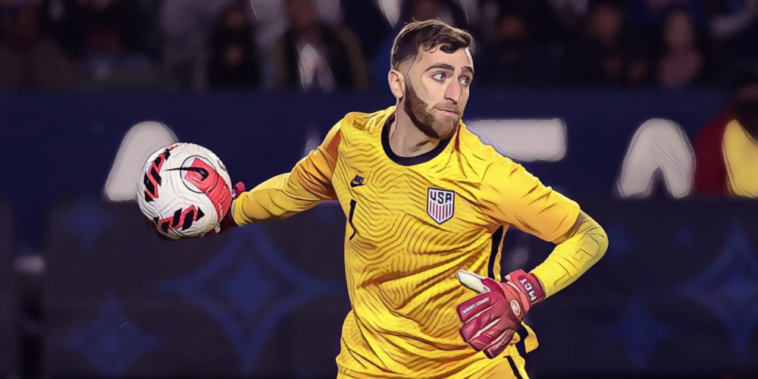 Arsenal have reached an agreement to sign Matt Turner from MLS side New England Revolution this summer.

The United States international will move to the Premier League at the end of the season, with the 27-year-old set to provide competition and cover for Aaron Ramsdale at the Emirates.

Turner was named as the MLS Goalkeeper of the Year in 2021 and broke into the US national side last year, impressing as Gregg Berhalter’s side won the Gold Cup, keeping five clean sheets in six fixtures.

Goal are reporting that Turner will move to Arsenal during the summer window, in a transfer that could allow Bernd Leno to leave in search of regular first-team football after the Germany international lost his position as number one to Ramsdale.

“It’s just a great story and I hope the public is aware,” he said at a post-match press conference on Thursday after the USA’s win over El Salvador.

“He went to Fairfield, undrafted out of college and now he’s playing with the USMNT and he’s headed to Arsenal.

“It’s an amazing story. His work ethic, his belief in himself and his never-give-up attitude, it’s a great story and Matt is a great guy, a great team-mate. We’re lucky to have him.

“Tonight was an example where he did everything he had to do. He was calm in all situations, wasn’t tested much, but he was there when we needed him and he looked like a guy that’s going to Arsenal for sure.”