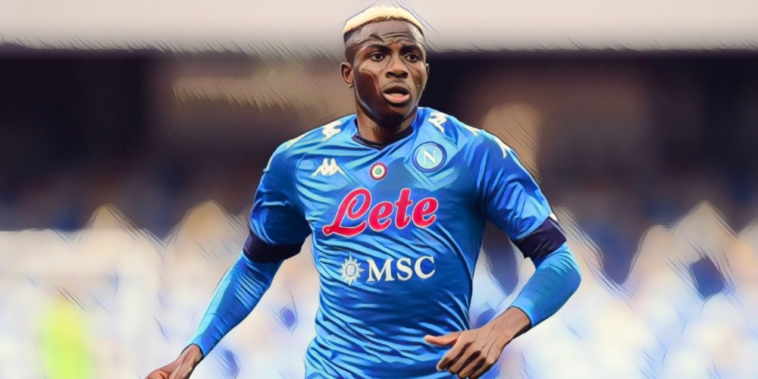 Arsenal have held talks over a move to sign Victor Osimhen from Napoli and are continuing to pursue a deal for Gabriel Jesus as the club look to sign two new forwards this summer.

Arsenal are expected to lose both Alexandre Lacazette and Eddie Nketiah on free transfers this summer and are working on deals to bring in new attacking options, with the North Londoners having opened talks with Osimhen.

Goal are reporting that the Nigerian’s agent flew to London last week to hold talks with Arsenal technical director Edu over a potential move from the Serie A side.

However, it will take a huge offer to persuade Napoli to part with the 23-year-old having signed Osimhen in a deal worth £68m from Lille in 2020 – making the forward the most expensive African transfer of all time.

Osimhen scored 18 goals in all competitions for Napoli in 2021/22, as the club secured a return to the Champions League after finishing third in Serie A.

Arsenal also remain interested in signing Jesus from Manchester City, with the 25-year-old expected to push for an exit from the Etihad.

Jesus scored 13 goals in all competitions as City won the Premier League this season, but is aware his minutes will be reduced following the arrival of Erling Haaland.

The Brazil international is understood to be open to move to Arsenal despite the club’s failure to secure Champions League football and will have just 12 months remaining on his deal this summer.