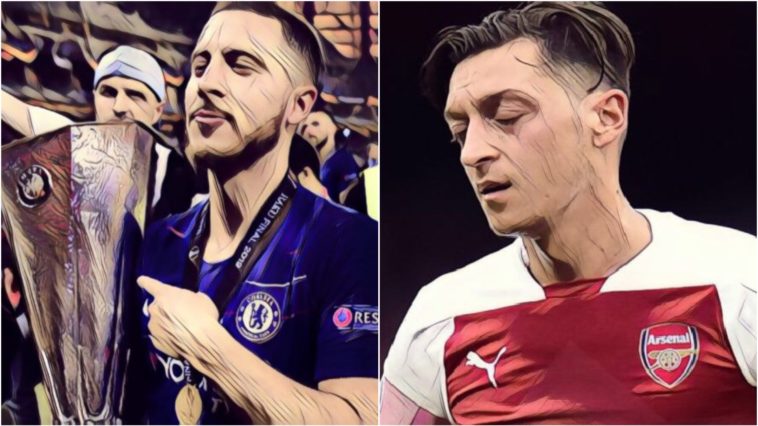 Chelsea’s emphatic victory over Arsenal in the Europa League final was a microcosm of the relationship between the two teams over the past decade and a half.

Watching Wednesday night’s massacre of Arsenal, one couldn’t help but feel a bit of sympathy for Joe Willock. The 19-year-old has only made four Premier League appearances in his fledgling career to date, featuring in just two games in this Europa League campaign before the final in Baku, but Unai Emery threw him into the fray in place of Mesut Özil at 4-1 down with just 13 minutes left on the clock.

It was an impossible task for the young Londoner, who impressed in his short time on the pitch nonetheless. There were some flashpoints that he won’t want to recall any time soon though: sent through on goal by Alexandre Lacazette, he had a glorious opportunity to bring it back to within two, but he hit it wide; then, with time ticking away, Lacazette attempted to keep the ball in play but it ricocheted out off Willock anyway.

What could have been a momentous occasion for a teenage prospect — playing a part in a European final —turned out to be a fruitless and frustrating experience for all involved. Young Arsenal supporters present in the stadium, who dream of one day experiencing what the number 59 in red did this week, despaired at the scene in front of them, tears leaking from their faces with the realisation that their team were not going to win this match. They’re not coming home with the trophy and their not going to be in next year’s Champions League.

For Chelsea, it was a glorious and deserved victory. Despite not impressing in the first-half, they were ruthless in the second, picking apart an Arsenal defence that has been getting progressively worse as the season has gone on. But it caps off a rather strange season for the Blues.

Listen to their supporters and their present situation with the manager is supposedly untenable. This is despite the fact that Maurizio Sarri has guided his team to third in the league and their first taste of European glory in six years. The forecast does, however, look grim: soon they will be left with an aging squad minus Eden Hazard and a transfer embargo that will stop them refreshing. And yet, would you really be surprised if they launched a surprise attack for the Premier League title next season?

This is the contradiction that is embedded deep within Chelsea football club. From the outside they look a chaotic lot, with little or no idea why they buy the players they do or hire the managers they employ. Doubts remain over the construction of a new stadium ever happening, while their Russian billionaire of an owner could leave at any moment due to his fractious relationship with the UK government.

Arsenal, on the other hand, have spent much of the past two decades being the opposite to their London rival. They have been the epitome of stability with Arsene Wenger in situ for 22 years while playing attractive football, developing numerous youth players and filing thousands of fans into their impressive new stadium.

Not that any of this has particularly helped them on the pitch; a lack of direction behind the scenes means that, FA Cups aside, they have rarely competed for major honours in the past ten or so years. Their only top two finish in that time was a flukey one at that, and they have hovered around the top four like a bad smell for years before finally falling down the pecking order these past three seasons.

In four of the past five seasons meanwhile, Chelsea have brought home silverware, including two Premier League trophies. The Gunners don’t suffer from many of the same internal issues that the Blues do, but their fans would probably swap places in a heartbeat.

For them, it must be hard looking at a team like Liverpool who, despite having not won anything in recent years, are going somewhere. You feel there’s a destination in sight and they are more than likely going to reach it. It must be even worse seeing a team like Chelsea achieve success in spite of their own lack of direction.

But then again this has been the case for years and Wednesday’s final was just a microcosm of that; Arsenal the superficially better-looking side, all sizzle no steak, Chelsea the pragmatic and cold-blooded winners. In a way, the result was never in doubt.

Read: Every English club to have won the Europa League and Uefa Cup since 1970

See Also: Five of the Best – Arsenal away kits