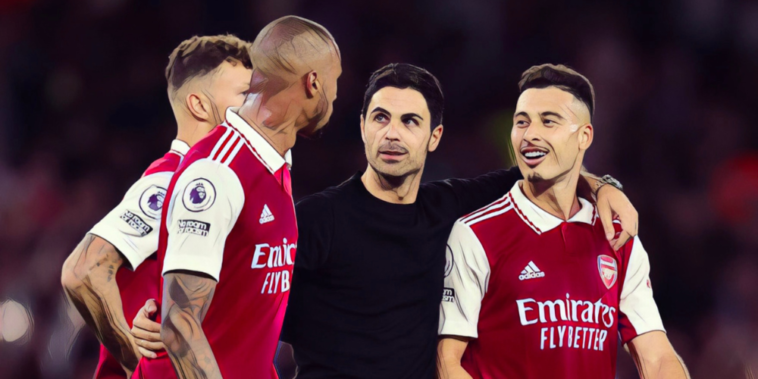 Bacary Sagna believes Arsenal will be the main competitors to Manchester City for the Premier League title this season.

Arsenal have began the season in impressive form and lead the Premier League table after six games, having won five of their opening fixtures to sit a point clear of Manchester City and Tottenham.

Mikel Arteta’s side began the season with five consecutive wins, before a 3-1 defeat at Manchester United on Sunday ended the club’s perfect start to the campaign.

The Gunners strengthened their squad with the signings of Oleksandr Zinchenko and Gabriel Jesus from City during the summer and Sagna believes those additions will make Arsenal challengers for the Premier League title.

The Frenchman – who represented both Arsenal and City during his Premier League career – believes the North Londoners will pose the champions the biggest threat this season and has questioned whether last season’s runners-up Liverpool are as strong this time around.

So often a favourite of those interested in Premier League betting, Liverpool missed out on the title by just a single point last season. However, the Reds have endured a mixed start to the current campaign and have won just two of their first six league fixtures.

Jurgen Klopp’s side lost Sadio Mane during the summer and appear a team in transition, as the Reds look to adapt to a new-look frontline that includes the £85m arrival of Darwin Nunez from Benfica.

Injuries have already contributed to dropped points for the Merseysiders and Sagna insists it will be ‘difficult for Liverpool to catch up’ to the division’s leaders, having already fallen six points adrift of Arsenal at the top of the Premier League.

The full-back believes that City – who are in pursuit of a fifth Premier League title in just six seasons – remain ‘very strong favourites’ to continue their dominance of the division with Pep Guardiola’s side having been bolstered by the arrival of Erling Haaland.

Haaland has already scored ten goals in his opening six games of the season, equalling Micky Quinn’s Premier League record that has stood for three decades.

”I feel Arsenal can be the main competition to Man City for the Premier League title, who of course remain the very strong favourites,” Sagna told Betway Insider.

”I don’t see any other team that can challenge them. Of course you can’t totally rule out Liverpool, but they have lost Sadio Mane and don’t look the same without him.

”Mane and Mohamed Salah complemented each other so well and were so consistent, I’m not sure Liverpool will be feared in quite the same way this season. I think teams are just paying the way they want to play rather than just working defensively to stop Mane and Salah.

”Having already dropped points it’ll be difficult for Liverpool to catch up.

”With Arsenal having made a perfect start it feels like they could be the main contenders to compete with this incredible Manchester City side for the Premier League title.

Arsenal next host Everton in the Premier League this weekend, while City face a difficult test as Tottenham visit the Etihad on Saturday evening. Spurs won both meetings between the teams last season and are unbeaten so far, with their 14 points from six games the club’s joint-best start to a Premier League campaign.