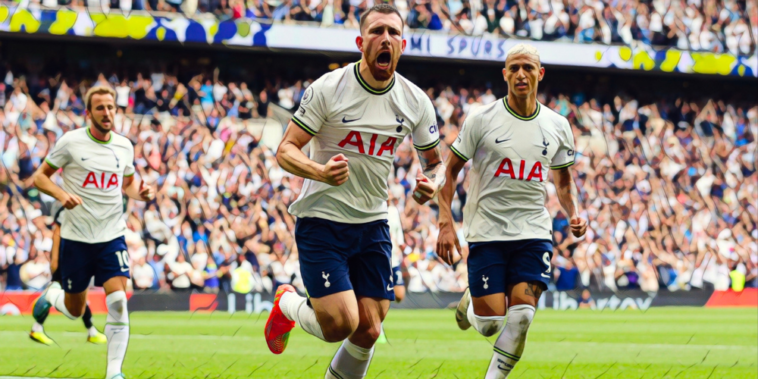 Hojbjerg at the heart of Spurs run

Tottenham’s win over Fulham saw the club equal their best-ever start to a Premier League season, having also achieved 14 points from their first six matches during the 2016/17 campaign – a season in which Spurs finished as runners-up.

It’s now 12 league games unbeaten for the North Londoners dating back to last season and there’s reason for optimism given a squad boasting more depth than previous campaigns.

The club’s summer recruitment has increased competition for places, adding genuine quality in key areas and issuing a response from those already in the squad. Dejan Kulusevki has started the season well amid competition from Richarlison, while Pierre-Emile Hojbjerg has so far seen off the threat of Yves Bissouma for a midfield berth.

Purposeful play from Pierre to open the scoring 🔥 pic.twitter.com/HRKlkqwsa0

The latter scored his second goal of the season against Fulham and impressed once again in partnership with Rodrigo Bentancur, their union in midfield one that balances bite and poise.

Hojbjerg’s form has been impressive over the season’s opening weeks and has left Bissouma watching on as he tries to break up the established pairing. His best work is often unseen, but Hojbjerg has been a pivotal part of Spurs’ strong start.

Are Leicester too good to go down?

It’s a repeated phrase often used when a side unexpectedly starts a season in poor form, with Leicester the latest who might be dubbed ‘too good to go down’.

The Foxes are bottom of the Premier League and five straight losses have piled the pressure on Brendan Rodgers, following the club’s worst start to a season since 1983.

The campaign is in its infancy and teams have recovered from far worse starts, with Newcastle becoming the first team to go winless in their opening 14 games and survive just last season – ending the campaign in 11th.

The Foxes now sit rock bottom with just one point from six games.

He hasn't been backed in the transfer window but is it time for Brendan Rodgers to go? pic.twitter.com/Uv8nm7kMlP

Leicester’s fragile defence needs addressing if the Foxes are to climb up the table however, with five goals shipped during a 5-2 defeat at Brighton. Wilfred Ndidi looked uncomfortable in an unfamiliar centre-back role, with his use in a deeper position emphasising the faith Rodgers has lost in Jannick Vestergaard and Caglar Soyuncu, each of who were left out of the matchday squad.

Much will be placed on recent recruit Wout Faes, who has joined from Reims to partner Jonny Evans at centre-back. Improvements are required and quickly, with the defeat at Brighton – a team who have replaced the declining Foxes as an overachieving outfit competing for a place in Europe – a new low in a sorry start to the season.

Liverpool have stuttered so far this season, winning just two of their opening six league fixtures following a goalless draw in the Merseyside Derby this weekend. But for the 9-0 thrashing of Bournemouth, the Reds have looked unconvincing and an even derby clash at Goodison Park could have gone either way.

One notable factor behind Liverpool’s form has been a lack of cohesion in the final third. Recent campaigns have seen the trio of Mohamed Salah, Roberto Firmino and Sadio Mane blow teams away with frightening synchronisation and there was always likely to be teething issues as Jurgen Klopp’s side evolves.

So close for Liverpool! 😯

Recent arrivals Luis Diaz and Darwin Nunez each have match-winning capabilities, but do either have the same selfless streak that Mane and Firmino possess, traits which often brought the best from Salah?

Salah was often on the fringes at Everton and there is work to be done for the new-look front three to become a cohesive unit.

After a sustained downturn in form, are we seeing signs of Marcus Rashford’s best? The forward has faced criticism across the past 18 months, often looking a shadow of the player who scored 20+ goals in 2019/20 and 2020/21.

Rashford struggled for form during a poor campaign last term, but has been a central figure in Manchester United’s improvement under Erik ten Hag. For the fourth consecutive game the 24-year-old led the line and repaid the faith of his manager with a match-winning brace against Arsenal.

It was the first time since December 2020 that Rashford had scored a Premier League brace and a demonstration of his improved sharpness around goal this season. He provided the assist for Antony’s opening goal, before racing onto Bruno Fernandes’ brilliant pass to tuck home United’s second.

Marcus Rashford has scored or assisted more goals in the Premier League this season than [Goals + Assists]:

The England international added the third after converting Christian Eriksen’s centre and this was an encouraging performance for Rashford, Ten Hag and Gareth Southgate.

Rashford faces a fight to return to the international scene before Qatar after falling out of favour, but more performances of this calibre will increase his hopes of a World Cup place.

Wolves’ defensive strength has been the bedrock of their success in recent seasons, with only the top four having conceded less goals in the Premier League last season.

Despite an overhaul this summer that saw the long-serving Roman Saiss, Conor Coady and Willy Boly all depart, Wolves have remained tough to beat and have conceded just four goals in six games to date.

Max Kilman continues to enhance his England chances with some fine performances, with talented left-footed centre-backs in short supply. Nathan Collins was signed from Burnley in the summer and the duo have the makings of a long-serving partnership in central defence.

No side in the bottom half has conceded less goals this season and it’s a good job for Bruno Lage given his attacking issues. Raul Jimenez has looked a shadow of his former self of late and missed the 1-0 win over Southampton with a groin problem, while the man signed to end Wolves’ woes around goal suffered huge misfortune this weekend.

Sasa Kalajdzic suffered an ACL injury during his debut on Saturday and is facing several months on the sidelines, just four days after his arrival from Stuttgart.

Wolves are understood to have offered a trial to former Chelsea forward Diego Costa in a bid to combat there problems in the final third, with the 33-year-old having been a free agent since leaving Brazilian side Atletico Mineiro in January.