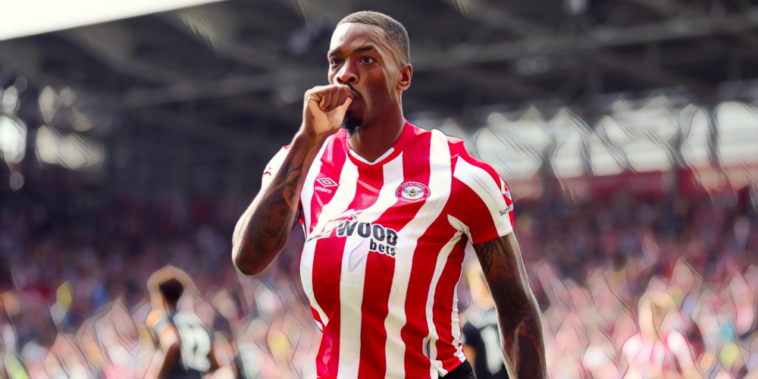 The weekend’s biggest talking points arguably centred around VAR drama, but from a footballing perspective our Moment of the Week was Antony’s arrival at Manchester United.

The Brazilian has arrived with huge expectation after completing an £86m move to Old Trafford on deadline day, but was thrust straight into the action for United’s clash with league leaders Arsenal.

His opening moments as a Premier League player showed plenty of signature showmanship, but United were second-best as Arsenal imposed themselves on the game. However, the moment the former Ajax winger had been waiting for arrived ten minutes before the break.

Marcus Rashford’s pass found the 22-year-old arriving into the area and Antony made no mistake to score his first goal in the Premier League.

The arrival of Antony – alongside a fourth consecutive win and improved performances across the pitch – contributed to a brilliant atmosphere with Erik ten Hag’s team appearing on the rise.

Ivan Toney is pushing hard for an England call and can only be growing more prominent in Gareth Southgate’s thoughts ahead of this month’s international break.

September’s fixtures with Italy and Germany are the last chance for Southgate to finalise his plans for the World Cup this winter and Toney deserves a chance to stake his claim for Qatar.

The 26-year-old was outstanding in Brentford’s 5-2 win over Leeds, scoring a hat-trick of the highest quality. It’s now 18/18 from the spot for Toney at Brentford, after the forward dispatched another penalty oozing with confidence this weekend.

Most goals in English football since Aug 2018

51 goals in 96 games for Brentford – his second today was his first from outside the penalty area#BRELEE pic.twitter.com/btPJ5MruoO

His hat-trick was completed with two stunning goals. Illan Meslier was rendered a spectator as Toney bent home a free-kick into the top corner, with the Leeds goalkeeper motionless in the knowledge he had no chance of reaching a special set-piece.

His third then demonstrated the quality and cool of Toney around goal, as he waltzed around two desperate Leeds challenges before lifting the ball into an unguarded goal from distance.

Toney is powerful and predatory and has an air of arrogance that could suit an England shirt that comes with expectation. With centre-forward options elsewhere injured or unconvincing so far this season, the Brentford forward deserves an audition.

Ivan Toney’s second goal of his treble with Leeds earns our Goal of the Week accolade, a strike so accurate that Illan Meslier decided against a dive.

For a footballer who had never previously scored from outside the box for Brentford, it was a set-piece of pure precision as Toney sent the set piece on an unstoppable trajectory into the top corner.

Bournemouth’s decision to sack Scott Parker just four games into the season brought criticism, with emphatic defeats to Manchester City, Arsenal and Liverpool – the latter a record-equalling 9-0 loss – spelling the end of his reign.

Gary O’Neill has been named as interim boss and guided Bournemouth to a morale-boosting win this weekend, as the Cherries came from two goals down to beat Nottingham Forest at the City Ground.

A goalless draw with Wolves in midweek brought an end to their losing run, but a show of character was needed as Bournemouth found themselves 2-0 down in a meeting between last season’s promoted side.

The former Portsmouth midfielder might just be eyeing the job on a full-time basis if recent results continue over the coming weeks.

Jordan Pickford was in inspired form for Everton this weekend with the goalkeeper underlining his status as England’s number one with a fine performance in the Merseyside Derby.

The 28-year-old made eight saves – a high for a Premier League fixture so far this season – in the goalless draw with Liverpool at Goodison Park.

Perhaps the best of the lot was this athletic stop from Darwin Nunez, as Pickford got fingertips to the Uruguayan’s powerful dipping effort.

So close for Liverpool! 😯

Reason for optimism at Tottenham?

Spurs remain unbeaten this season following a 2-1 win over Fulham this weekend, with the North Londoners having now won four and drawn two of their six games.

It’s the club’s joint-best start to a Premier League season alongside 2016/17, when Spurs ended the campaign as runners-up.

Antonio Conte had dismissed his team as contenders for the Premier League, but it will be a title that could come if Spurs maintain their early season form.

14 – Tottenham have 14 points from six Premier League games this season (W4 D2 L0), their joint-highest total at this stage of a campaign in the competition alongside 2016-17, when they went on to achieve their highest ever finish in the division (2nd). Promising.

On a weekend in which VAR controversy again reared its ugly head, Declan Rice was unafraid to give his to-the-point view on the Premier League’s standard of officiating.

West Ham were denied an equaliser at Chelsea in contentious fashion, with Jarrod Bowen adjudged to have fouled Edouard Mendy in the build-up to Maxwel Cornet’s disallowed leveller.

It was one of a number of controversies involving the technology this weekend with confusion and chaos in several Premier League games.

No holding back from Declan Rice… 👀 pic.twitter.com/zUOuTefUMC

Leeds were on the receiving end of a big defeat at Brentford, as Jesse Marsch’s side were hit for five after a poor performance in west London.

Ivan Toney ran riot for the home side who punished some dreadful defending from Leeds, with Diego Llorente enduring a nightmare performance.

The Spanish centre-back had a difficult start and never recovered. He was involved in the chaotic mix-up for the third goal after a missed interception, lost Bryan Mbuemo for the fourth and was embarrassingly robbed of possession as the last man for Brentford’s fifth.

An afternoon to forget for Llorente after some slap-stick defending from the Spaniard.