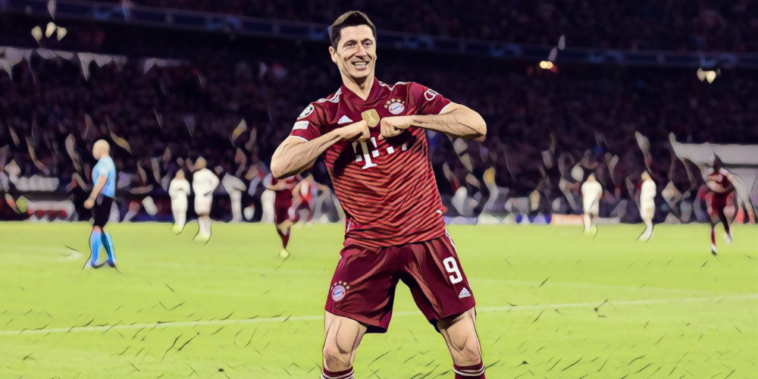 Bayern Munich striker Robert Lewandowski enjoyed a milestone moment after scoring a hat-trick on his 100th Champions League outing, joining an elite list of players to have scored on that landmark appearance.

The Poland international became the 42nd player in the competition’s history to reach a century of games, although only five other stars have marked that achievement with a goal.

Here we look back and appreciate the six players to have scored on their 100th Champions League appearance.

Thierry Henry netted on his 100th Champions League appearance during his time at Barcelona, scoring in a 5-2 win over Sporting CP in November 2008.

While it would be in Catalonia that he would claim his one and only European title – starting in the final win in 2009 – the Frenchman is best remembered for his iconic spell at Arsenal, who he joined from Juventus in 1999.

It was in north London that the World Cup winner developed into a prolific goalscoring presence, becoming the club’s all-time top scorer with 226 goals in all competitions during his eight-year spell, including netting 35 goals in just 77 Champions League games.

Despite his continued brilliance, Henry was unable to guide the Gunners to European success, with Arsene Wenger’s side just falling short in the 2006 showpiece, as his future employers Barca came from behind to clinch a 2-1 victory.

After sealing a switch to the La Liga side the following summer, Henry formed part of Barcelona’s treble-winning side in 2008/09 and scored his 50th – and final – goal in Europe’s top tier competition in 2009, scoring in a 4-0 win over Bayern Munich in the quarter-finals.

Of the 42 players to have reached a century of appearances in the competition, Zlatan Ibrahimovic is one of only three players without a winners’ medal, alongside Cesc Fabregas and goalkeeping icon Gianluigi Buffon.

Ending that streak appears unlikely with AC Milan already eliminated in the group stage of this season’s competition, although the 40-year-old still has time to add to his tally of 48 Champions League goals – a record which leaves him ninth on the all-time list.

He is also 17th on the all-time appearance list with 121 appearances for seven different clubs, first making his debut in the competition for Ajax in 2002, netting a brace in a 2-1 win over Lyon.

⚽️ One of the most feared strikers of his generation…

Moves to Juventus and then Inter Milan followed, before the Sweden international made the switch to Barcelona in 2009. Finding himself in the wrong place at the wrong time, he missed out on both Inter’s treble-winning season in 2010 and the Spanish side’s coronation as European champions in 2009.

A loan move AC Milan in 2010/11 saw him again miss out as Barcelona clinched a second European title in three years, before he became the marquee signing of a new era at Paris Saint-Germain, netting on his 100th competition appearance against Olympiacos in 2013.

A move to Manchester United in 2016 saw him clinch a Europa League title, later becoming the first player to play in the Champions League for seven different sides with a substitute appearance in a 1-0 loss to Basel.

The greatest marksman in the the history of the Champions League marked his 100th appearance in the competition with a goal, scoring in a 3-0 quarter-final win over Borussia Dortmund for Real Madrid back in April 2014.

That European campaign ended in triumph for Ronaldo as the La Liga side saw off rivals Atletico Madrid in the final to clinch the much coveted ‘La Decima’, with the Portuguese icon netting in the showpiece to seal his second Champions League success, having first won the trophy with Manchester United in 2008.

It was at Old Trafford where he enjoyed his first taste of Europe’s top tier competition – having only previously reached the qualifying stages with Sporting CP – although it would take him 27 games to finally get off the mark, as he bagged a brace in a 7-1 win over Roma in 2007.

The forward made the switch to the Bernabeu in an £80m deal after losing the 2009 final and added four more European titles to his collection, having been a part of a remarkable side that won three consecutive trophies between 2016 and 2018.

While his move to Juventus in 2018 failed to deliver the desired silverware, he has since returned to former club United and is already writing headlines in the Champions League, with five goals in four games thus far, including dramatic late winners against both Villarreal and Atalanta.

His recent brace against the Italian side – which included a stoppage time equaliser – has extended his record to 139 goals in a record 180 appearances in the Champions League, the milestone of 200 appearances not out of the question for a player who has shown few signs of slowing down.

Almost inevitably, Andrea Pirlo marked his milestone appearance in style, curling in a sensational free-kick in a 3-2 win over Olympiakos during the 2014/15 group stages, his sole Champions League goal for Juventus.

The Italian midfield general was far from a frequent goalscorer on the European stage, although when he did deliver it was often majestic, with five of his eight career Champions League goals having come from free-kicks.

After beginning his career with brief spells at Brescia and Inter Milan, it was following his switch to AC Milan that he truly developed into world-class playmaking talent, forming a formidable midfield unit with the likes Gennaro Gattuso and Clarence Seedorf.

Those three stars were integral as the Serie A side reached three European finals in the space of five seasons, beating rivals Juventus and Premier League side Liverpool in 2003 and 2007 respectively, while losing to the latter on that night in Istanbul in 2005.

Having been deemed past his prime by those in Milan, Pirlo made the switch to Turin in 2011 on a free transfer and would go on to exact revenge on his former employers by helping begin a period of Serie A domination at Juventus.

He formed part of the side that reached the 2015 Champions League final in what proved to be his final game for the club, though it ended in defeat against Barcelona with Pirlo going on to join MLS side New York City – where he retired in 2017.

Toni Kroos has scored just nine Champions League goals to date, although one of those came on his landmark night back in October 2019, as he netted the only goal of the game as Real Madrid edged past Galatasaray.

Far from a prolific goalscorer – with that strike his most recent in Europe – he is a prolific Champions League winner, having won the competition on four occasions; once during his time at Bayern Munich and three times during his stint at the Bernabeu.

The German international began his career with Bayern, rising through the youth ranks before making his debut in 2007 and going on to develop into a key player for the Bundesliga side, having enjoyed a successful stint on loan at Bayer Leverkusen.

That temporary switch saw him miss out on Bayern’s defeat to Inter Milan in the 2010 final, though he played the full 120 minutes in the loss to Chelsea on home soil two years later, before missing out through injury as the Bavarian giants saw off Borussia Dortmund at Wembley in 2013.

He moved to the Spanish capital in 2014 after helping Germany to World Cup success that summer, playing a vital part in Madrid’s remarkable three-year stranglehold on the Champions League, as Zinedine Zidane guided Los Blancos to success in 2016, 2017 and 2018.

The 31-year-old is now a senior member of the current side and remains a key player, having made 117 appearances in Europe’s elite competition to date.

The Poland international’s latest treble helped Bayern Munich secure passage to the knockout stages with two games to spare, as the Bundesliga champions recorded a resounding 5-2 win over Benfica at the Allianz Arena.

Not only does that mean that the 33-year-old is the only member of this list to have capped his 100th Champions League appearance with a hat-trick, but it also ensures he has the best goalscoring record of any player after a century of games in the competition.

His remarkable tally of 81 goals puts him ahead of the iconic duo of Cristiano Ronaldo (64) and Lionel Messi (77), though he has some way to go to catch the two men on the all-time list, with Ronaldo leading the way on a staggering tally of 139 goals.

While edging past the Manchester United talisman would take some doing, Lewandowski has a chance of bettering the 36-year-old’s record of 17 goals in a single campaign – which he achieved in the 2013/14 season – with the Bayern man already having hit eight in just four games so far this term.

Of his 81 strikes, 17 of those came during his four-year stint with Borussia Dortmund – including a four-goal semi-final destruction of Real Madrid back in 2013 – with the remaining 64 having come since he made the switch to the Bavarian giants in 2014 on a free transfer.